I have blog deficiency and will write a little something. Indeed, I already have the photos edited and uploaded for the next long post, to tell of visa woes related to my last concerts in Seattle, of family visits, polar bears in the zoo, and the extensive reading and writing for my upcoming Ph.D. applications, to which I assign full responsibility for preventing me from writing here. (The good news is, I am able to sit sufficiently still that the papers are coming along; my interest is still piqued (Or is it peaked? I hope not.); and yet I'm still sufficiently distracted to have stumbled upon a (hopefully) unique perspective on Scotch Education. I'm sure the part about the debt at least is correct.

The last paper is due tomorrow, and having started today before six, I have a planned distraction in the afternoon which I hope will bear some fruits. Despite this, it's hard to move ahead now at full steam at 8:30 in the morning, knowing that no matter what I do, I'll be tinkering with more or less advanced stages of bibliography-formatting well into the night.

A short word about the snow: my present workspace looks out onto a riverside park here in Ottawa - we launch the canoe just 150 meters away in summer. It's covered in snow (both the park and the canoe, that is) - the powdery kind that's not much good for snowballs. I get the same nostalgic feeling looking at this fresh snow that I did at the smell of the leaves on the street shortly after I landed in Montreal in October. There is no mystery to this snow, it's an old friend. Looking out, I know and look forward to how it will feel to breathe in the cool but gentle air when I leave the house, and also the kind of texture that my feet will step into. This is the kind of snow that used to fall onto the ice rink at the end of the street. In the evening the kids played hockey (I joined in sometimes but was never much good with the stick), and as night came a designated dad from the neighbourhood (often mine) would go to maintain the ice, which they did so well that it was hard to skate on the knobbly Rideau Canal afterward. Every night they would come out with the hose and spray a new layer of water to smooth out the cracks left from games. (Some skaters carved worse marks in the ice than others, and for the benefit of the low-impact types - that is to say, who were still learning to brake - there were snowbanks framing the ice on all sides.)

Some mornings in high school, when the snow was falling just like this, I would leave the house too early and with my skates over my shoulder so that when I passed the rink I could be the first and only one to cut patterns in the new snow, still under the light of the streetlamps or in some lucky cases, the moon. I went ice skating for the first time in a few years last week, but I still miss the feeling you get when you have a whole rink to yourself and can build up such speed that you can coast from one end to the other. 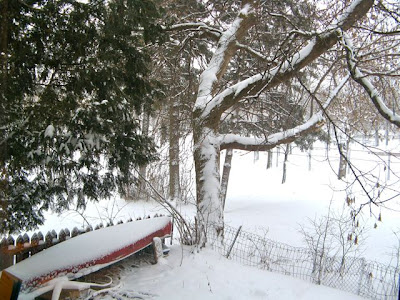 Posted by Catherine Motuz at 14:19