The concert tonight went rather well; Good Friday is an exceptionally good day to play the trombone. And yes, I did behave in the trill department - many but all quite tasteful, if I may say. I got the feeling early on of being very concentrated in a way that used to perturb me - I used to confuse it with nerves because it feels very intense. But tonight I held onto it and it made it a very fulfilling concert indeed. Kudos to the first violinist, who played with a lot of fitting 17th-century ornaments and historically informed style, despite steel strings and a tourte bow (and chinrest and shoulder-rest and fine tuners - gosh the modern violin world has made things complicated!!). Wouldn't it have been easier for him with a baroque setup though?

Between rehearsal and the concert there was time for a walk. There are already pictures of Bremgarten on this blog from when I Fedeli played there back in January, but now in the springtime it's even more beautiful: 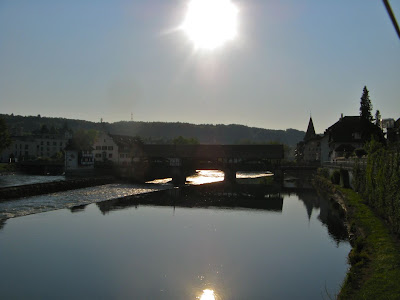 The Banks of the Reuss 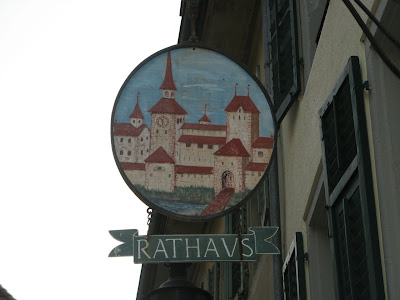 Not inaccurate depiction of the town 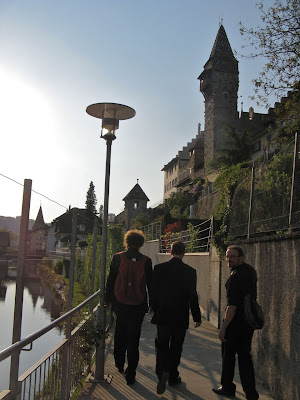 Nate and others on the Riverbank 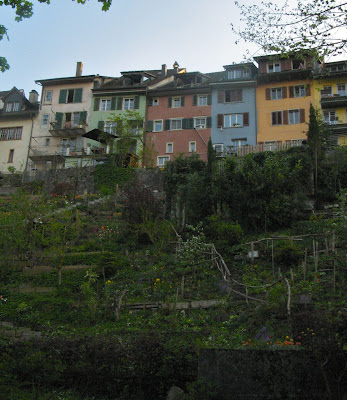 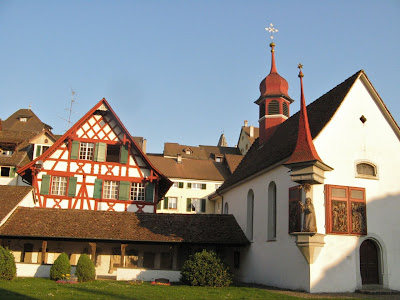 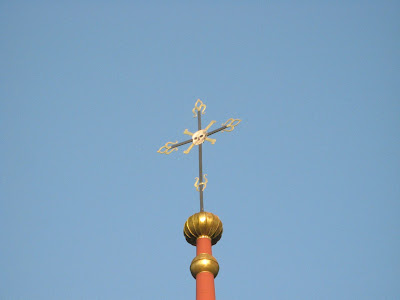 Closeup of the Chapel Cross 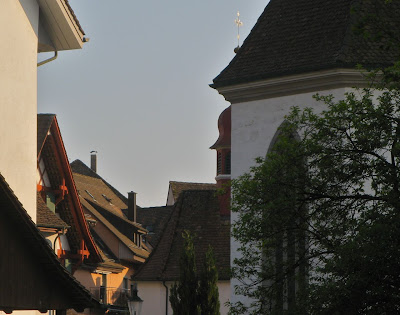 A few people have asked now what Motuz Confectus means. Well, it's a pun. Oh well. "Motus confectus" is an early and slightly more noble version of a frottola, which is an early version of the madrigal. The frottola flourished in Italy at the end of the 15th and early 16th centuries. Oh yes, and again briefly in 2009.

It's been 25 and sunny for almost two weeks now, whilst today it snowed in Montreal. I've changed my mind, I'm staying here.

Last weekend I think I finally digested that I'm moving back to Montreal - it's starting to feel exciting and not just an excuse to turn my life completely upside-down. The process of digesting involved a lot of lying about and staring at various white surfaces, alternating with hiding under the covers, until finally on Sunday evening I decided I'd better play a bit of trombone to make sure I was in good shape for my Easter services. Glad I dragged myself out of bed - Good Friday music is especially tiring but especially worth it. Caldara, Draghi and Tuma all worked in Austria at a time when there were virtuosi trombonists about, so there are lots of nice solo bits, and because it's Good Friday it's full of delectable dissonances too. It's all on alto trombone, which in one piece with no rests is particularly taxing, so to celebrate that I'd held onto practice discipline despite all my lying about in a daze the crucial three days before, I threw in a few gratuitous trills. I'll behave more in the concert tomorrow.

Today the flights to Canada this summer, when I'll need to go on an I'm-moving-back admin trip (woohoo) went down, some by 50 francs, and one by 300. Yey! But that one was from Geneva to Toronto via Brussels, leaving so early in the morning I'd have to find a place in Geneva the night before. Airlines, airlines - why do you play with my head so? After deciding that I'd be slightly miffed if no similar prices for a more convenient connection showed up but really extremely disgruntled if one did and I'd already bought this one, I gave it a pass. Besides, my mental health is worth far more than the 80 francs the flight would have really saved me after trains to Geneva and from Toronto are considered.

I've had a pretty relaxed week, finally getting out to enjoy the sunshine on Monday, when I went to Bern to catch up with Alison, who is here for a Feldenkreis course. In the forest along the banks of the Aare we found some Bärlauch, or wild garlic, and collected some leaves. We then bought some walnuts and, with a potato masher, mashed it all up with oil and a bit of salt and had pasta with Bärlauch pesto - yum!

I'm also entering cheesecake experimentation mode - I think my white chocolate and raspberry cheesecake for Caroline's 30th birthday party on Friday (after an excellent concert by the Habsburger Camerata with whom she plays) went down rather well. But today's attempt at tofu-based cheesecake, while no disaster, is really only enjoyable doused with rhubarb compote. Otherwise it still tastes mostly like tofu. Or chalk. Oh well. It's healthy enough that I can eat it for breakfast tomorrow with no guilt whatsoever.
Posted by Catherine Motuz at 00:13 No comments:

Well, I've just announced it on Facebook, so it's time to announce it here too: I'm moving back to Montreal. In September. To start a Ph.D. at McGill.

Whew. While I digest having written that out, a few necessary updates:

My bike is fine thanks to the excellent diagnostic and surgical skills of Nate Wood. Also, it didn't cost me loads, because while I'd ripped the derailer in half (oops) and derailers can get expensive, I bought new tires (I don't have to keep translating into UK do I?), chain, break pads, inner tubes, that bit of frame that I'd bent out of shape, and then the shop, not having the derailer I wanted (I'm not expert, rather it was the "just right" version in Goldilocks pricing), gave me a used one of the same model for free. It's back on the road now although it still needs a few adjustments....

I recently turned down my first gig because it didn't pay enough. What a milestone, do be able to decide not to be exploited. In this case, while for sanity reasons I've decided not to get my knickers in a twist because singers get paid really a lot more than instrumentalists (who are YOU listening to in Tuba Mirum?) I just couldn't handle being paid less than scale fees in order that the singers be paid four times more, so I demanded at least scale. The trombones in Saul are, after all, indispensable. They never wrote back but while going over schedules with another trombonist afterward I discovered I'd been duly replaced. So I get twenty hours of my life back - yey!

Yesterday I finished a project that has been really a lot of fun: playing Renaissance dances for a choreographed dance of 200 schoolchildren. The first rehearsals included the very narcissistic experience of standing in the middle of a circle with 40 of them dancing around me. Last night I got to play pied piper in the parade and then partake in some Alta Capella madness with a great band of cornetto, shawms, percussion and me. I did have issue with some of the 4-part arrangements on offer, as in "I'm not playing that bassline another 80 times" so I wrote my own funked-up versions. We also got some chances to improvise - diminutions of course but also a passamezzo at the end, which was quite fun. 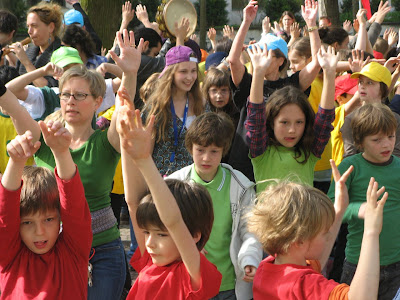 Children of Many Colours 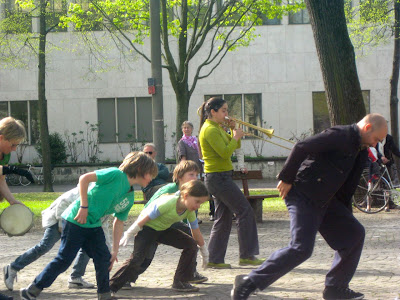 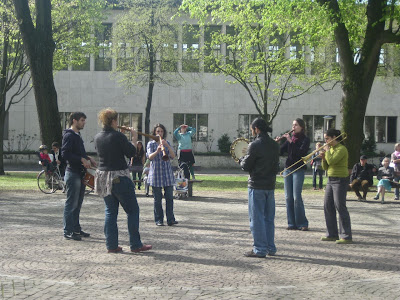 Alta Capella
As you can see from the t-shirts and sunshine, spring has sprung here. Last week was t-shirt and BRS weather, this week the trees have breathed a sigh of relief at a bit of rain, and all the greens have become greener. This picture is from two weeks ago already - it was much more leafy yesterday: 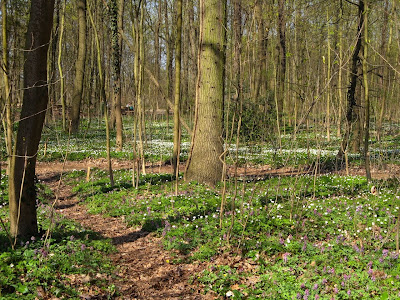 Flowers on Forest Floor
This one is more recent, of my herb garden and the cherry tree in the neighbour's yard, still going strong after having exploded in pink last week: 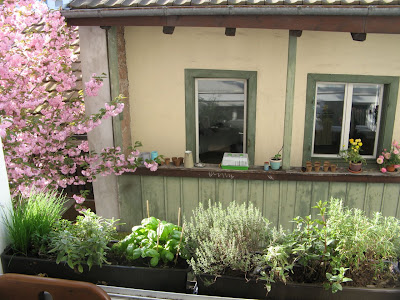 Other work-related events: The same Nate Wood who fixed my bike went head-over-heels off of his last Thursday - ow! He's ok now, nothing broken, but as he sat in hospital waiting to find out how bad it was he called me to possibly replace him that night for Ars Moriendi, a theatre project involving songs and bits from Purcell's Music for the Funeral of Queen Mary. So I very quickly learned the basics of playing Flatt Trumpet - an instrument more or less invented for this funeral as far as I understand, like a trombone but with the slide behind your head. I also memorized the music and learned the blocking for the show - not to say I got good at marching in twos and going up steps while playing but I sort of knew where I was supposed to be and how to get there. Correcting intonation was hilarious because one has to move the slide in the opposite direction, so slightly out of tune notes became hideously out of tune until I'd gotten a bit used to it. I learned a lot, but was relieved that Nate was able to walk and felt well enough by evening.

My parents have taken their cue of my leaving Basel to come visit one last time. When Mom was here last week, we enjoyed the insistent sunshine, taking some sausages and heading out to a park we call innocently the "gorgeous gorge" (but don't google it whatever you do). It's a gorge with caves and a big round table and firepit, and at the top is the magic playground, with the kind of splintery teeter-totters (oh alright, UK: seesaws.) and metal-and-wood merry-go-rounds of the kind that health and safety officials like to ban in favour of McParks years ago. Nostalgia rating: 9/10. 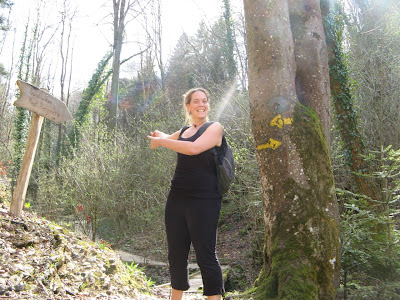 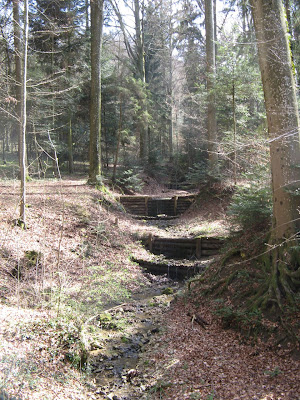 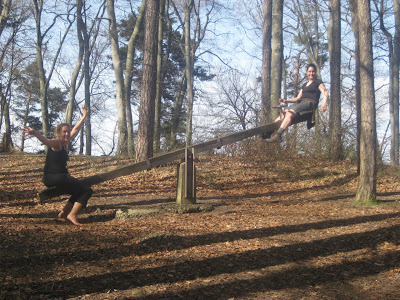 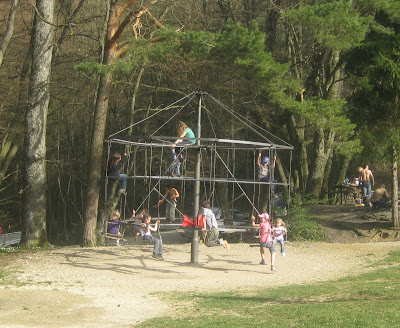 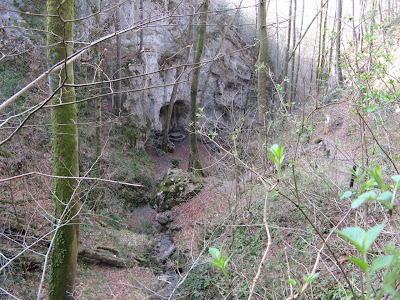 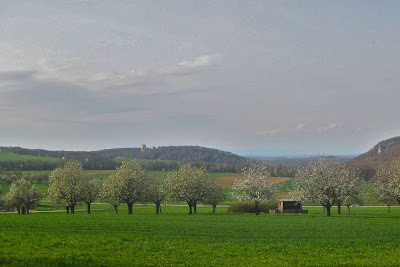 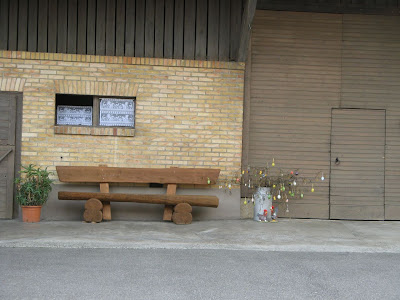 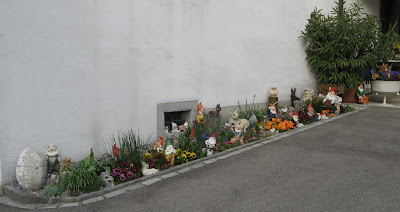 Garden invaded by gnomes
An Easter Tree? Yes, they decorate trees, or at least branches, for Easter here. Tina was quite appalled when, having given me some spare ornaments, I mused on their egg-shape and hung them on my Christmas Tree.

Yesterday was Sophia's fourth birthday. I gave her the purple ukulele. I think I'll buy another one for myself when I go back to Canada - one where the frets can move or be taken off. Apparently she had her first appearance last night, accompanying herself to twinkle twinkle up on her bed in a pink dress while her Kindergarten schoolmates gathered 'round on the floor. I'm sorry to have missed that.
Posted by Catherine Motuz at 09:26 No comments: