At the beginning of this week I found myself faced with the horrifying realization that I had become bored. When I was about 12, I read lots of books on wilderness survival: practical tips on how to start fires, build shelters, make snow goggles out of bark and spear fish with sharp stones. One thing they all said was that there is no worse enemy to a person surviving in the wild than simple boredom, closely seconded by loneliness. Suddenly I realized that the most exciting part of my summer job was gone, with three months to go and that while I was slowly getting to know people, I still didn't really know anybody well. I'd fallen into the trap. I woke up one morning and thought to myself, oh dear, what do I do next? So I tried to figure it out and this is what I came up with:

Step 1: Stupid little errands. These I accomplished on Monday, giving myself until 4 pm or so to get as much done as I could. I managed laundry, some grocery (UK: food) shopping, putting some items in the mail (UK: post), buying a bike bell, sunglasses, getting my front derailer fixed, and getting closer to figuring out what to do this autumn. That was enough, on to step 2.

Step 2: Skip town and hang out with friends. 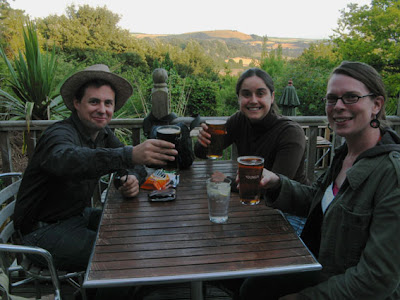 Gawain, Me and Helen on a Dorset hill
I bought myself a network rail card and headed for the hills - off to East Knoyle where there was a conjucntion of two dear friends, and enjoyed a very relaxing evening eating curry and morning faffing about and checking out the local gardens. 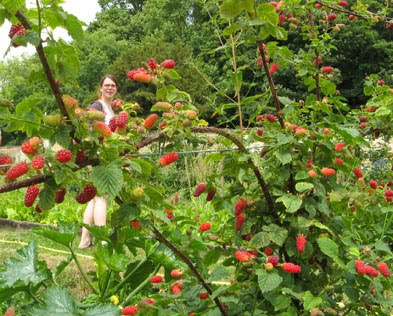 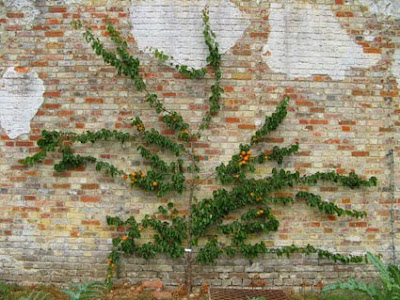 It was very, very hard to get back on the train to London. But...Onto step 3.

Step 3: Practise. There's nothing more depressing than the feeling that I'm not on my game because I'm bored. I had the funny situation where I could play everything in both shows pretty easily, but in the context of the show it was much harder. Makes sense - playing a fanfare on my own time is one thing but waiting 10 minutes then marching up to the front of the stage, putting the cold instrument to my lips and playing on someone else's count of "one-two-three" was not so easy. So I practised imagining myself on the stage in just that situation. I realized that while on trombone I can get ready to play quickly in one fluid motion, having a different embouchure and a different way of blowing on trumpet meant I needed a beat to relax and a beat to get my face in the right position. I realized that by the time I heard "one," it was too late to breathe in if I was going to start relaxed. So I just practised "walk - breathe - relax - make embouchure - play" over and over again until it became more second nature - and in the last two shows the fanfare in question was much easier to pull off.

Step 4: Spend a day practising doing nothing. This was Wednesday. In Basel we call this taking a Sunday. It involves remaining in one's pyjamas for as long as humanly possible, in my case just moments before my exhausted hosts came home from a long day of teaching. I suppose it's important not to have too many of these in a row - it can hinder the other steps. And to use the time well, making doing nothing into an art in its own right.

Step 5: Cardiovascular exercise. I finally discovered the route that Transport for London told me I should use to get to the Globe - it circumvents the very busy streets and introduces a monster hill into the South London landscape which I had previously assessed as being flat. So with my front derailer fixed I've been cycling to and from the Globe (or sometimes just to or just from, thanks to the ability to take bikes on the train). The hill is getting easier every day and whatever it's doing to my brain chemistry it feels great.

Step 6: Hydration. I discovered that I have enough time between my offstage fanfares in Part II to take advantage of my staff discount and buy me a homemade lemonade. Yes!

Step 7: Go play with some kids. If you don't have any in your family close by, borrow someone else's. How lucky for me that my favourite three-year old was visiting from Basel today! 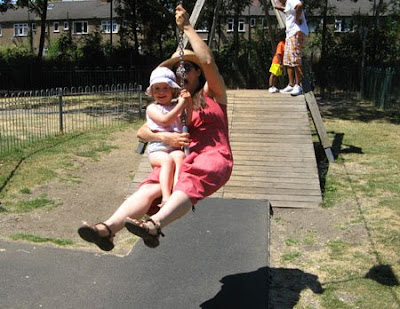 Sophia and I - Who is having more fun?

Step 8: Sit in the kitchen after a show with a glass of Shiraz, make chocolate-chip cookies and update your blog. Done, done, and done!
Posted by Catherine Motuz at 11:43