Ah! Finally a day off to write. So, may I suggest that you go and get a cup of tea before continuing? It's going to be a long post.

First thing's first. I went into town on Monday evening and found the Country Dancing session and Hannah, who I'd met on the train and who had told me about the event. After a sample of very fine local beer and som 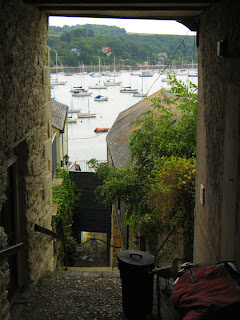 e cider which tasted just a bit too home-made for me, musicians started showing up: two guitars, squeezebox, hurdy-gurdy, later on a flute. As they began to play some gangly white-bearded fisherman types acquired a previously unsuspected twinkle in their eyes and plucked the pretty young women from the sidelines to show them the steps of the walzes, the circle-dances, the line dances. It was rollicking good fun.

The Hurdy-Gurdy player had impressively strung his instrument in gut, for the sake of authenticity he said. Of course from there it was short work to determine that through my old roommate (UK: flatmate) in Basel we were, until then, but two degrees of separation. 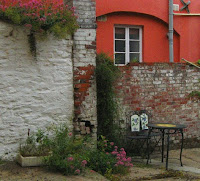 Falmouth is a lovely town. I was a bit worried that it was going to be quite touristy, but though there were quite few tourists and quite a few chippies (num num num), it had held onto its local culture and no part of it was made of plastic.

It's quite true that this is not the first day off I've had since I wrote last - I've been busy though. Here you can see the walk through the buzzing Falmouth town centre to get to Swanpool Beach (not. And Yes, there was a pool with swans in it), where the kayak course was being held. 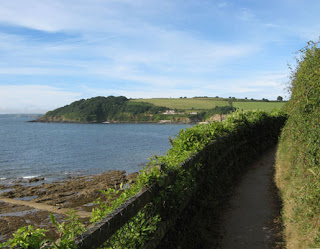 I had no idea that Sea Kayaking was an extreme sport, honest. I've canoed since I was five or so, and kayaking on lakes was a natural extension of that. I'd gone all my life until now not capsizing once, but the sea is a different beast than freshwater.

I had no idea, for instance, that the tides resulted in flows from west to east and east to west as the open Atlantic rushed in around Britain to fill the channel. I had no idea about Spring and Neap tides. While I've paddled in some harsh weather and choppy water (the lakes in Canada can get pretty big, after all), sea swells, those broad gentle waves that are responsible for sea-sickness, the kind you can play upon quite harmlessly until they get to shore and turn into wild surf - they were completely foreign.

The second day we engaged in "Rock-Hopping," paddling as close as possible to the rocks along the coast, exploring caves and gullies and squeezing between boulders. We did the same on Thursday, but this time it was level 2: paddling across the reefs which were only covered in water when the 3-foot swell was in. In one case I approached a little bit late and felt the rock hit my keel as I was paddling off the reef. In the caves, when things got narrow and we couldn't paddle with both ends anymore, I sighed a sigh of relief: I was allowed to paddle like a canoe and felt suddenly much more at home. 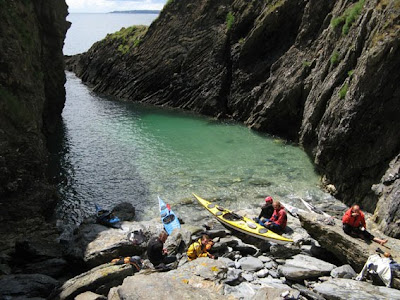 lunch in a secluded gully

On Wednesday and Friday we went to the North Cornwall coast, a bit less sheltered from the Atlantic, where there's plenty of surf to play in. At first we were told to go and try out playing in the surf, and get pushed over a few times to get used to the idea - ok, capsizing here I come. The first time, in 3-foot waves, I capsized immediately, hitting the bottom and banging the paddle into my face, giving me a black eye and a bruised lip about a 1.5 mm from where my mouthpiece sits. Confidence Building Excercise Fail. We were then taught how to brace the kayak against the surf which would try to flip us (noted, yes, thanks) and brought into 6 foot surf. Wait? What about practising in the 3-foot surf? Not fun enough for our intrepid and slightly foolish instructor, who went off to play in the waves whilst the rest of us capsized again and again, sometimes putting our lives in danger, sometimes not. Finally we all gave up and told the instructor he'd made a very bad choice indeed. 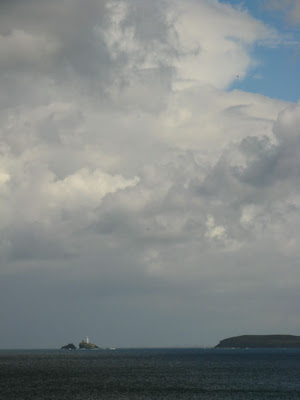 North coast: the sea is big, but the sky is bigger
That night we found out that no one had remembered to book the pool for the evening rolling session that had been one reason I'd been quite excited to take this course. I raised a fuss and it was agreed that we'd set aside some time on Thursday to roll in a secluded bay instead - fine - but the instructor lost track of the time and half-apologetically stated that it wasn't going to happen at all. No, no, no, that won't do! said I, who until then had seemed demure and laid-back (I was on vacation, after all) and I'm sure this made my flaring nostrils all the more shocking. And the lovely dutch couple, Ton and Els, both vouched that it was on the course outline and if we didn't do it on Thursday then we had no hope of practising it Friday and then definitely no hope of actually learning it.

So, I got my rolling course, only 20 minutes but I rolled, on my own, twice, and then did the same on Friday in the swells of the deep sea. I am contented. And, I've found a canoe club nearby in the London area which meets every Monday evening to practise their rolls in a local pool, so I think I'll join in and see if I can get a consistent roll before I go again in Scotland.

Despite these shortcomings, the course was a really fun time with lovely people and I learned loads and loads. Even the surfing part I got more of a knack for on Friday (when we played in 3-4 surf which was a bit more manageable), and to be honest, even in the big surf I did enjoy the thrill of being carried on the front of the wave before it engulfed me. The hospitality in Cornwall made a big difference too - Falmouth Backpackers was easily the best and most welcoming hostel experience I've ever had, and the people in the ice-cream stand replaced the ice-cream on Ton's cone when he was attacked by a giant and very rude seagull! 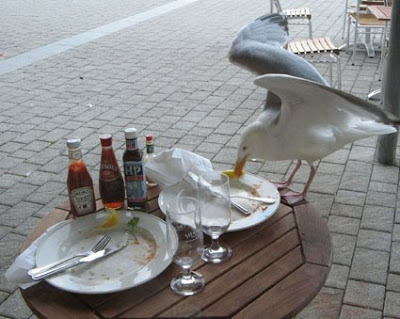 The North Coast of Cornwall
On the way back, I quite randomly met up with Uri on the train platform in Exeter, and he was taking the same train as me towards Salisbury. It was very nice to have a traveling companion from Basel to catch up with, and within a minute of saying goodbye, I was picked up and whisked back to East Knoyle to spend the night with two other friends I'd known from Basel. What a small world indeed! We delved into the very wee bottle that I'd purchased at a shop near the Globe before a good night's sleep.

The next day, Saturday, I made it back to London, and on Sunday was back at the Globe. Thank goodness we brass players can stay in shape just by playing our mouthpieces! We had rehearsal 8:30-11:30 am, followed by shows at 1 and 6:30 - what a long day! By the end we were all a bit zombie-esque, prompting me to wonder why the Globe has gone for a similar schedule the day after tomorrow. Sometimes alertness is better than preparedness. Sometimes. The excellent thing about Sunday's long day was that Claire McIntyre (another Basel friend...) was depping in, and we had good chances to hang out and catch up as well as play both shows. And we went back to said shop to pick up a tiny little bottle of cask-strength Glen Farclas to bring with us up onto a large hill in Scotland. Oh, and we took some silly pictures of ourselves in our costumes: at last! 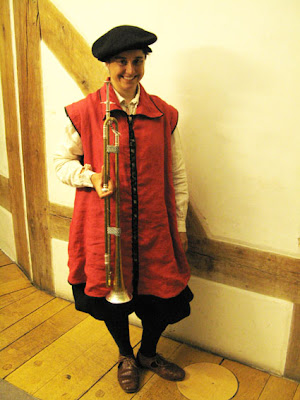 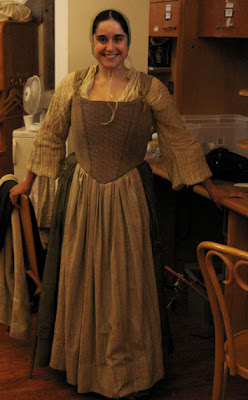 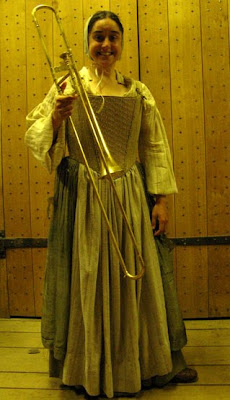 The rest of the week has been more or less a routine Globe week. On Tuesday, I used the excuse of delivering a bassoon to Paddington station (yes, there's a brass sculpture of the namesake bear) to head to the British Library. I've decided to let myself become slightly obsessed with England in the early Jacobean period. Everyone needs an obsession. I've been reading up on the English Masque, and thought I should go and read some, see a facsimile of a print of one by Campion from 1614 (the original's not far away in Oxford) and get my hands on a revival of the Faeries' Masque performed for King George in 1771. Now why on earth did they do that?

Then I headed to the Early Music Shop, which I won't bother linking to because it was a disapointment. At first I thought I'd wandered into early music heaven - a vast library of facsimiles with instruments of all sorts lining the walls...then I took a closer look: only gambas and recorders and there were not so many facsimiles at all. It seemed as though every second one was entitled "Two dances from the Renaissance, arranged for recorder consort." I did find some Bassano and Virgiliano collections for solo instrument (which in the case of Virgiliano at least is mostly illegible in facsimile due to running ink) and they were cheap so I nevertheless left with a sense of victory.

Yesterday was also a two-show day at the Globe, and between them I got a text from Caroline (yet another Basel musician) saying she and Ralf and some German friends were coming along in the evening. It was lovely to see them and I might even run away to Chichester to see the sea again in Caroline's company, as our days off and situations in the same country have formed a conjunction, the next of which not even the most talented astrologer could possibly predict. 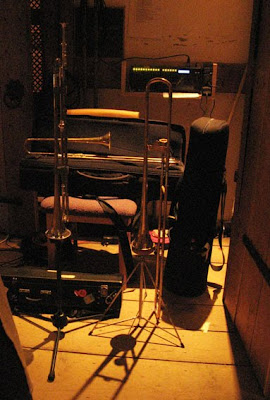