My fantasy of taking the ferry from Barcelona to Rome didn't work out as rehearsals for the concert I'm here to play took place in Switzerland. I did, however, have an ultra-diva moment a month ago and buy myself a plane ticket to come down to Rome today. I got out of bed the same time as the bus left from near Zurich, and got a text when I landed that with summer Saturday tourist traffic they'd just barely made it to the Italian border. Gosh. I was feeling rather smug about this yesterday, but now, tucked into a Pizzeria near Vatican city, awaiting my pizza with anchovies and zucchini flowers and enjoying an intermittent stray wifi signal, I have to say I feel a bit guilty too. For the record though, I am completely and utterly knackered, and I'm sure I would be miserable and ill on the bus.

I moved out of my flat in Basel this week - a relatively major operation made much lighter by moving only into my practise room downstairs for the time being. Many thanks to Dorothea for showing up at my door and demanding to help once the kids were at daycare, and to Tobie and Gaby for helping me get the dust out once my stuff had been adequately scattered through other rooms of the building. All work was made lighter by the Bombay Sapphire being very reasonably priced in the Barcelona duty-free and Tonic water having become more readily available in Basel over the years.

I've got some time (though less than I think ) over the rest of the summer to sort out my stuff and some proper down time coming up to help prepare mentally for starting my Ph.D.

Barcelona was an excellent way to prepare. I don't think I'll ever get over finding academic conferences slightly depressing, but I think at least that I wasn't the only one. I think it's quite a lot more about finding the people who are interested in similar things as you and getting to know them a bit - something conference organisers seem to have parsed as social opportunities were given just as much emphasis as the papers themselves. I had a good first experience giving a paper. I didn't feel like a fraud, which is saying more than it seems to. I also didn't feel like I gave something special to the world, but I got into some good conversations afterwards, and that's something too. 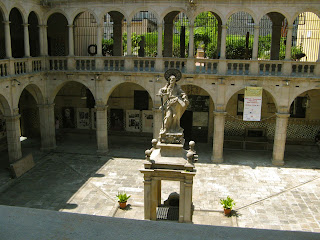 Lovely Conference Venue:
The Institut d’Estudis Catalans
I played hooky on Thursday and went to the beach instead of hearing any papers - something I don't regret except that in putting on sunscreen I went light on my shoulders with the hope of getting rid of my farmer's tan. I did, but got quite burned in the process; not having witnessed strong sunshine all last summer in the UK I'd quite forgotten how extreme a midday sun can be.
On Friday the conference left some time in the afternoon, so a small posse headed to Park Guell, designed by the famous architect Antonio Gaudi. It's all on top of a hill, and the entrance from the metro gives a stunning view of the city and the sea.

Barcelona!
The restaurant has now closed so I've relocated. I'm not in Rome anymore, but taking shade under one of the pillars at the entrance to Vatican City. When I was here when I was fifteen, Barbara Clark remarked on how it was an independant state, a city within a city. Like Vanier, she said.

Ignoring for the moment the tower of St. Peter's behind me (I get to sing with the choir in the Vespers service tomorrow and will get my fill then), the Gaudi architecture in the park was well worth the walk in the heat. The buildings, with their rounded corners, have something anthroposophic about them, but the fact that they've all been, well, iced, makes me think that Gaudi might have taken himself a bit less seriously than the folk in Arlesheim. Could be wrong though. 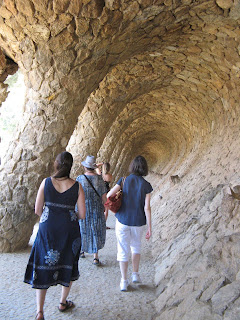 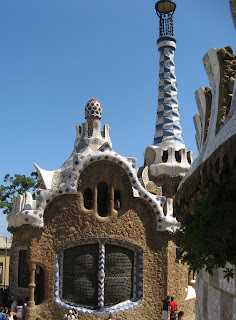 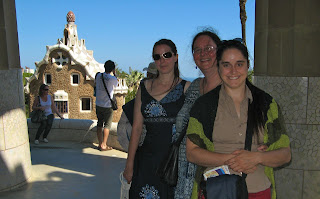 On Saturday I went with Julie, Peter and Lori around a little cloister and then to the market, but here pictures are far better than anything I could write. 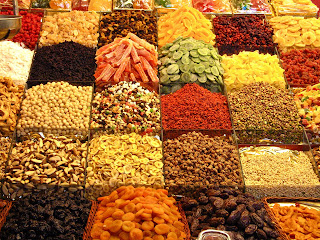 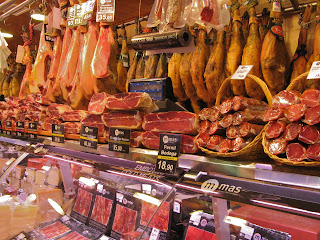 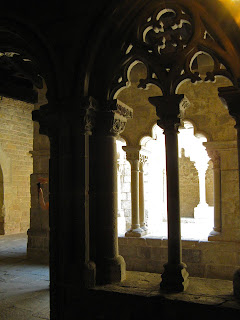 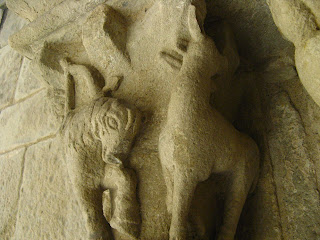 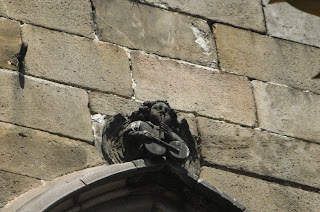 Not quite ready to tackle moving yet, I fled to Bern on Sunday, where Tobie and Alison and I explored the Paul Klee museum. I was impressed greatly at the amount of intention in all of his works, whether light-hearted or serious. Every line and every colour seemed to have a purpose, and the amount of care that exuded from each painting gave me the feeling that I, the audience, was important somehow.

The Paul Klee museum also has areas where children can go and paint. We were jealous. But then feelings of envy melted away when I spotted a very orange wall and realized I had my very orange raincoat with me: 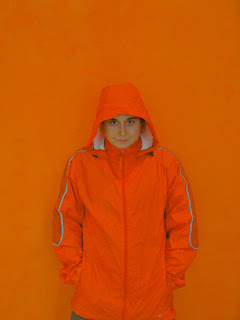 Orange.
Having exhausted our brains, it was time to jump in the Aare. Much closer to it's glacier source, it's colder and cleaner than the Rhine, and also quite a bit faster. We could hear the ringing of pebbles being carried along the bottom as we were carried along. Alison thought it looked quite lazy, but staying above water in such a force, not to mention moving to the middle of the stream and back, made it not insignificant exercise. When the weir was approaching we got out and as Tobie was still content to sunbathe a bit, did it again.

Besides moving house, I've been in rehearsal this week for this tour in Italy - a programme of Mexican/South American Baroque music. I'm sorry to report that my goal to make it to 10 years of professional sackbut playing without dong a concert involving a rainstick has turned to ashes. But it's a lot of fun, both the funky 17c dance pieces and the sacred polyphony of Zipoli - some excellent fugues in there. Sometimes on days that I don't play, I wonder if I really can play the trombone, and I had the pleasant experience of realizing that I could once these quick and notey pieces were put in front of me to read at full tempo. I had a great time. I didn't feel like a fraud.

If I don't manage to come back for all their projects, then I'll miss playing with the I Fedeli crowd a lot, really a lot. Playing the sixth verse of a processional hymn, I thought it would be grand if my part, the alto line, were played up the octave as a discant. But it would have been too high for me, so I jumped the the soprano part and within a measure of having his part doubled, Josué got the message and did exactly what I'd been thinking.

The breeze coming through the pillars here is lovely, but I think it's time to head to the hotel and see if I can't crash out a bit and/or do some admin I've not been able to get to amidst running around all week. While it seems a pity to hide out inside on such a lovely day in such an amazing city, that's just how it is. I feel very lucky that music brings me around the world, but then there's always a lot of catching up to do when I get home, so that means working at my computer or recovering lost sleep in exotic places. And anyway, there aren't many Italians about, they're still having their Siesta. When in Rome....

Posted by Catherine Motuz at 17:01