I can hardly begin to conceive of catching up all in one blog post here - I've been running a lot since I posted last. I started on the plane to Montreal, but then the chaos of trying to furnish a bare apartment and then heading off into the Internetless woods made posting impossible. Now I'm in Toronto on my first day off with Internet since I wrote last (which wasn't a day off itself), getting ready to head back to Europe tomorrow, so I'd better write something.
-------


In the air on the way to Montreal.
Not just because I'm 12 1/2 hours into this trip do I write that I'm a bit tired of traveling. Last week in Italy was, in the end, a bit much. It was a very strange tour, the second that I've done in Italy where the organizers assumed that because it's a beautiful country and full of excellent food, it could easily be part tour/part holiday. Read 2 days of rehearsal + 8 days away for less money than usual (and far less than when I first wrote this as the Euro plummets to be on par with the Franc and I haven't been paid yet). Hmm. I do like Italy, but I was in Basel so very little this month that I wasn't ready to leave this morning, neither psychologically, nor in moving and packing: I only managed to pack one suitcase, leaving plenty behind to sort out still, and an unplanned week ahead.

To assume that every musician on a tour might be happy to have traveling about playing concerts considered part holiday shows a basic lack of understanding for the life of a musician. Yes, tours can be "fun," but not of the theme-park variety. Music tour fun doesn't depend on seeing the sights, but rather it depends on having enough rest, preparation, and having enough time for yourself that the concerts - ultimately your main reason for being there - are fulfilling to be a part of. Good meals and fine company is excellent too, but much tourism beyond the culinary tends to be draining and counterproductive. While you can see from the pictures, I did get about, but in general the instrumentalists did less tourism time in than the others. Sleeping, catching up on email, and practising took up a large part of our time off - some in the choir couldn't understand why we didn't want to explore more. Having been to Italy already in mid-May and Barcelona, Paris, Heidelberg and a few random other places besides since, hiding away in my hotel room was most of the time all I was up for. When the conductor announced that we'd leave earlier on a travel day to have more time in San Gemigniano and Siena, a few of us explained that this was a concern because we would be left with no practice time. "But why do you need to practise - we've done the concert twice already?" he said. Hmmm...how do I begin to explain? But we dropped Siena from the itinerary so it was ok - I spent the evening alone though, my music suffers if I don't have any time for myself. In the end it suffered anyway - we over-rehearsed in each sound check and didn't get any break to get off our feet before each concert except one (by far the best one!), and on the third hour of standing I was tired.

These errors on the part of the organization stemmed from a lack of understanding, not of a lack of respect, so in that sense they were forgivable. But when they organized for me a wake up call at 7:30 one morning, apparently to make sure that I would be on the bus by 8:45, that changed everything. Thinking it was up to me to decide whether a shower and breakfast were more important than sleep or not, I'd set my alarm for 8:00, so you can imagine how patronized I felt that someone else decided I needed an extra half hour. So I'm afraid I have to rank this tour fairly low on the list.

Here's a few pictures though before moving to the Canada bit:

Olive trees on a Tuscan Hillside 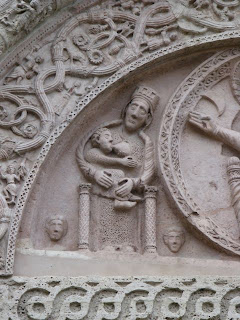 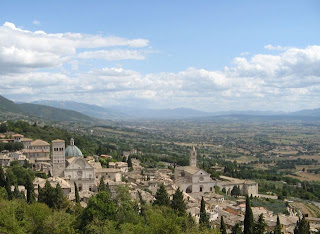 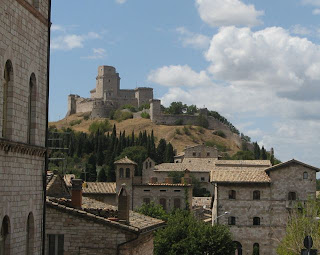 Castle on a hill, Assisi 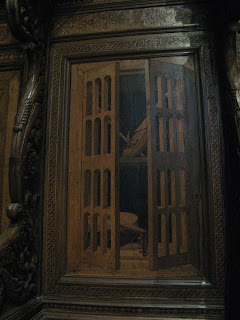 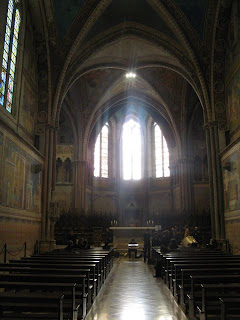 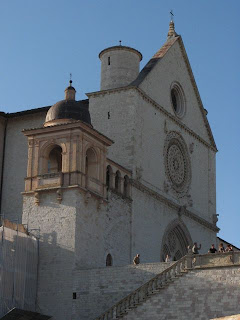 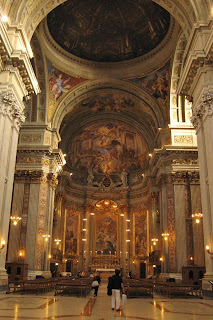 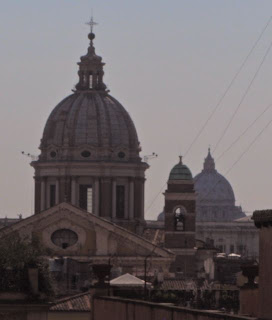 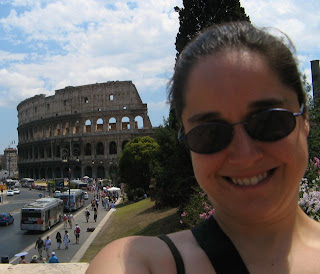 A wee bit of tourism 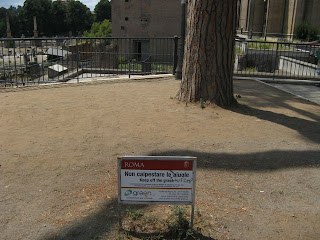 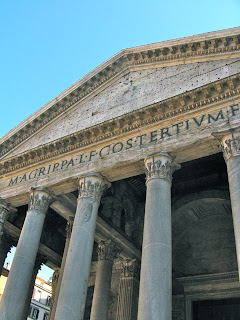 St. Peter's
------
Now onto Canada. The flight was genius because I managed to nap in Heathrow - a real first - and then upon landing I was greeted by my mom with a rental car and a tin of freshly-baked chocolate chip cookies from my sister Alexis - thanks both! We went off to Longueuil for a good night's sleep and some of Peter's lovely homebrew before tackling my new and very bare apartment in the morning.
The first day we managed to achieve a fridge - it's enormous as many Canadian fridges are. Canadian home economics is built upon buying large amounts of things all at once and storing them until you do another big shopping trip (bread and vegetables are exceptions). The difference in price between 1kg and 10kg of flour, for instance, is often 1:3 or so, so a lot of storage area makes food shopping a lot cheaper, at least where cupboards and fridges are concerned. So while my fridge is embarrassingly large (though very efficient), it's vast freezer especially will save me lots of dosh.

That evening, quite jet-lagged and daunted by the stresses of the week coming, I didn't have the energy to go out and find an Internet café to find more furniture on the classified ads. Then my mom noticed a little black box with flashing green lights in the front room. The landlord hadn't unplugged the Internet yet! The week was going to be quite a bit easier after all.
Over the rest of the week, I managed to get a used but lovely dining set, pots and pans (thanks mom), dishes, cutlery, a chair, and a very large bed that will make me feel like a royal every night. I had a moment with the dishes, where coming home to eat soup out of a very large new navy and brown bowl I looked into it's deep chasm and felt like I'd made a devastatingly wrong choice. This bowl was far too serious for me. It was not who I am, nor who I wish to become. So mom and I went back and now I have a very jolly green set of dishes.
To end this very stressful week of settling in, I signed up for a kayak rolling course on the Saturday - I know it sounds like more stress but I thought the activity would at least distract me from the intensity of moving across the ocean. But I showed up tired, stressed and stiff as a board, and my body categorically refused to learn anything despite the fact that it was almost a private lesson. Head falling back into the water again and again, I was mortified. I knew what I was doing wrong but my body wouldn't obey: I couldn't move the paddle without pressure, and I couldn't keep my head down. Oh dear. I left in utter dismay and hoped that my brain would digest something of the day. After a few hours at home I went to the Jacques-Cartier bridge and watched the last presentation of the Montreal International Fireworks competition - one of many reasons why Montreal is a cool place to be in summer.
Last week I went with my mom and my younger sister's family to the gorgeous Bruce Peninsula, which separates the Georgian Bay from Lake Huron. Three days after my catastrophic lesson, we rented a pair of kayaks, including this gorgeous, sexy Zephyr 155. After heading out to the beach of Cyprus Lake, I put on goggles and a nose plug (yes, I'm a bit of a wuss when it come to water up my nose) and prepared to practise my roll. I let go of expectation, and got ready to just try to get used to being upside-down underwater, completely ready to let myself fall out and swim to shore. Once I got my bearings underwater, I took a deep breath (kidding), and tried to put my paddle, head and hips in the right place. Seconds later I was sitting above the water again, shocked. And delighted. I tried again, and again I was sitting on top of the water. After about 30 or 40 tries, trying to refine my technique each time, I finally started to be confident that I, too could roll a kayak. I am quite sure that that particular (gorgeous, sexy, sleek, fast) kayak was among the easier ones to roll; I'll give another try when I rent my next one and see how it turns out.
The kayaks weren't always used for extreme sport though: at sunset, my sister and I paddled through the lily-clad narrows joining two lakes, observing a turtle and a deer, and even little Liam had a go (in ankle-deep water and towed by daddy of course!) 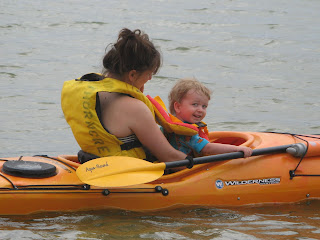 Liam getting his first taste of Kayak, age 1
Though my hangups about rolling made me obsessive about getting into kayaks, swimming in the clear water of the Georgian bay will stick as clearly in my mind as riding the rolling waves on top of it. 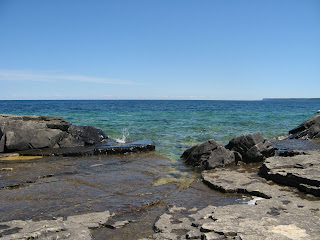 After the Bruce peninsula I took the Greyhound to Toronto, where I was picked up by my older sister and whisked off to Peller Estates Wineries on the Niagara Peninsula, where she's got unlimited tastings - yum. A bit lightheaded - the Pinot Noir and Gamay were quite nice - we headed off for a whirlwind tour of the Niagara Falls which I'd still never seen - they're very cool indeed.
Now I'm getting ready to head back to Basel, tomorrow already - Basel still feels like home but I'm starting to yearn for my apartment in Montreal too, with it's lovely dinner table, green dishes, back yard full of ripe berries and ridiculously large Queen bed. All very good indeed.
Posted by Catherine Motuz at 07:52