My last days in Basel were busy, intense and lovely. Saul went well - it was amazing to hear the same orchestra in March sound better in the first rehearsal than in the last concert, thanks to a more engaged conductor. The conductor sang the part of Saul as well, he obviously loves the piece a lot and did a very good job of switching gears between being responsible for an orchestra and for his own singing. I was wondering how things would go for me as I had only brought a mouthpiece to Scotland and had done the minimum amount of tooting to be in shape for the first rehearsal. It was fine, I even stuck in some gratuitous trills. Know your limits, yes, including your minimum so that you can take proper vacations now and again.

On Monday Helen and I had a joint going away party. We couldn't find a big enough room to rent, so we had it by the Rhine, demarcating our little area with some torches and setting up a table with enough baguette and French cheeses for a small army. And a small army came. Helen managed to achieve party-levels of garrulousness, while I was so gobsmacked by seeing so many friends come to wish us well that I started to believe that I was actually going and was short on words. But it was lovely. Parties outside are genius, too, if you can find a good place. You don't have to find a place for people's coats and you can always hear what the person you're talking to is saying.

The rest of the week was a combination of cleaning, packing, staring at the wall wondering what was going on, and playing another concert of Latin-American Baroque music with the Bremgarten people. A bit mad to play a concert on my last night, as it meant that I got back to packing at around 12:30 am, but it was also a nice way to finish off, and to be frank, necessary as this whole transatlantic moving thing is turning out to be expensive.

The plane ride, back in economy class, was fine. I have a little ritual now of eating sushi on my Heathrow layovers, it is a perfect travel food in many ways. On the Basel-Heathrow leg I was thinking about all the people who had helped me set off: When

On the plane, I couldn't deal with watching a film - I was already getting teary at the soundless scenes on other people's screens, so I watched some documentaries on breakthroughs in materials: Plastics with anti-bacterial properties because of a pattern on them that replicates shark-scales, and of course the ever-fascinating carbon nano-tubes, which I'm sure have progressed significantly since I wrote about them last.

As my rotator cuff is still complaining after hauling around very heavy bags around Montreal in May, I've come to accept the fact that no part of me is invincible, and rode the airport bus from the front door of the airport to a taxi stand near me. Wasn't expensive even. Makes me feel even more stupid about May but I'd better get over it I suppose.

Well, my rotator cuff is doing much better now. In fact, my whole body is rejoicing that I'm back on a bicycle again, bought at le vélo urbain on Papineau. It had a gear issue on the first afternoon riding it, so I took it back to the shop and they gave me a new gear-shift - very professional. It's still acting up sometimes though, I'll try tightening the cable though before I bring it back again. I bought a used bike because Montreal is a bike theft capital, so fast but ugly is a very good combination if you don't want to be stressed about whether your bike will still be there in the morning. Montreal has become a much friendlier city for bicycles since I left seven years ago, though because of its relatively new congestion problem I find myself taking roads as often as the "protected" paths (which aren't protected when you get to an intersection). I think in Basel I was considered quite an aggressive cyclist; here in Montreal I'm a bit of a wimp.

Obviously it's been a bit full on since I got here, I really have to decide how to fill every moment of my day because there are always things which urgently need doing. I tried to sit down the other day and figure out what are priorities on my todo list, and even that is a bit long. Reconnecting with friends, preparing for classes, organizing my ensemble, keeping my playing up, becoming a legal resident, supporting myself financially and taking care of my physical and mental health all seem to rank as no. 1 on the list at various times of day. Hence not being a very avid blogger, but at the moment it's very good for my mental health.

Starting studying again has been just fine. I was a bit more reluctant than I thought I'd be to jump into the 150 or so pages of reading I have to do each week, but now that I have a sofa and a choice of three teas in my cupboard it's going better. I look forward to learning some new words: epistemology, ontology, hermeneutics, semiotics - they keep coming back in readings and I hope that by the end of the semester I'll sort of have a vague idea of what they are and how they're used. I'm not looking forward to that point just because I want to throw around big words, it's not very cool to do that for its own sake, but some people get all riled up in philosophical discussions about music and I'd like to know what they're excited about.

Taking care of my mental and physical health, before the bike, involved a walk around and in the botanical gardens down the street. Thinking the public Parc Maisonneuve was a bit closer, I wound up skirting the edge of the fee-requiring botanical gardens for about 6 blocks before finding an entrance. I was grumpy about it at the time until I found this puffball: 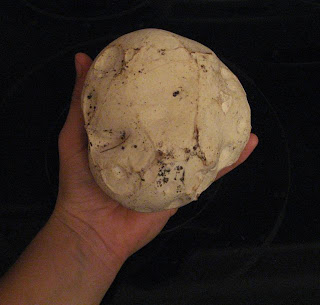 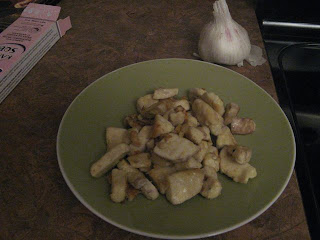 I had found some others as well, but when I went back a few days ago to see if they'd grown, the lawnmower had been by in one spot - alas - but in another, a new one was ready for consumption. Yesterday the skies opened up multiple times, so today I thought I would test the theory that mushrooms pop up after rain, and sure enough, there was a third, quite as big as the one above. I peeled it on the spot to leave at least some precious spores on the site, the rest will be risotto.

Nesting - another key element to mental health upkeep - has been fairly successful so far: on Sunday I picked up a UHaul van and, thanks to the help of a few very kind people, got a free guest bed, some garden furniture (I have a garden!), the desk I'm writing on (which is absurdly short but keeps my arms at the right angle) and a lovely beige sofa-bed. Lots of beds now, come and visit! - it's hard to imagine we were sleeping on the floor in July. I also have got hold of a clavichord to babysit - I quite miss the feeling of a harpsichord but given much of my free time will be at 2 am a clavichord is quite good. Which reminds me of a discussion at the Schola about the words "avec discretion" at the beginning of a Froberger sonata, and someone defined "avec discretion" perfectly as "the manner in which one walks in late to a clavichord recital." Dad and Jane visited on Sunday and Monday, and much of the time was spent in the backyard practising my spray-paint technique on the lawn furniture - it's starting to look new again.

Organizing concerts here has been a bit hands-off except for the tedious task of finding a name for the band that we can all agree on, which has been dragging on since May. Zefiro, Sirocco, Oltremontano and the other poetic names for winds all being taken, we've settled on "La Rose des Vents," which translates as "The Compass Rose," and shows the directions of all the above. There are a few nice specimens of historical maps with fleurs-de-lis on their compass roses, in the hand of Samuel de Champlain no less, which should solve the problem of a logo fairly quickly (I hope).

Reconnecting with friends has been made easier by Amanda, my nearest neighbour, who invited me 'round for supper twice so far, including a BBQ where I could catch up with some old friends and meet some new ones. Very lovely. Thanks Amanda!

I won't write about the paperwork of moving back, that's boring. Supporting myself financially is only mentionable because attached to my RA-ship, a significant part of the income that comes along with being a professional student, is 480 hours of work, so obviously it will feature here again. I've done two so far and am trying to get my head around how to fit the other 478 in. Part of this work will involve learning and blogging about this project, and probably helping out with it the nitty-gritty bits once a bit of technical competence rubs off.

Lastly, keeping up the playing career. Among all the madness of moving and the rest, you'd think a bit of time away from the trombone might be in order, but I just opened my email to find directions to the Concertgebouw for Monday's concert. Yes, the one in Amsterdam. Right. To be fair, I've managed to set aside my denial about flying away again on Friday for about an hour a day to practise some classical alto, but as next week's six concerts of the Mozart Requiem AND Coronation Masses together are likely to be some of the most physically challenging concerts I've played so far, it's time to do sign off and practise some more.
Posted by Catherine Motuz at 18:13