This is a post about why I haven't been blogging. That is, by the time I'm done telling you, you'll know all the things that have been going on to prevent me from curling up on my cozy couch and telling you before.

I think I left off in the middle of the Amsterdam Baroque Orchestra tour. It got better and better even as it was extremely grueling. Our 3-hour bus rides in Romania turned into 6-hour bus rides, but I got to get to know some nice people and got a lot of work done besides so I can't complain too much. Early in the tour, Claire said she found herself less nervous when she stopped looking at the music during the Tuba Mirum solo and just looked at the conductor. I started experimenting with this idea on my own: revelation. The more I looked up from my music, the more fun I had, the more I trusted myself, the more musical I was, the more I reacted to what was going on around me. And most of all, the less room there was for negative self-talk and nerves. Of course it helped a lot that there wasn't a millisecond that Ton Koopman (the most obvious person to look at at the time) wasn't completely engaged in the music, and his enthusiasm for it was extremely contagious. I left the tour in a very good mood indeed.

The last night, the bars of Timisoara had closed, so to continue our post-tour festivities we all brought down the contents of our mini bars and enjoyed a nightcap. 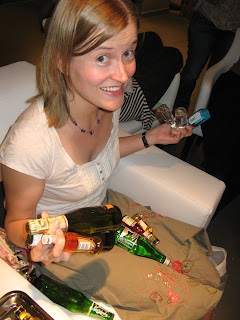 What can I get you? 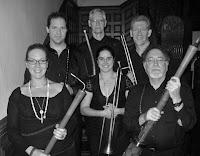 On the way home, I met up with Ann Allen in Heathrow Terminal 3, and we enjoyed my traditional Heathrow sushi together before boarding a plane to Montreal. Ann was coming for the first concert ever of my new band, La Rose des Vents (who will have a website, um, soon). We played as the invited guests of one of Montreal's professional choirs, VivaVoce, in a programme called "Dinner with the Dukes of Bavaria," in a 16th-century wind band setup much like I Fedeli. In fact, thanks to Ann, we were 1/3 I Fedeli. The concert went rather well, if I may say, and we're looking forward to working with them again.

The next week was a mix of hanging out with Ann, who had become successfully enamoured of Montreal (what's not to like?), and being jolted back into the real world of, oh yeah, doing a Ph.D. While I tend to absorb information if it's taken in at a good time (i.e. mornings), I'm a pretty slow reader, which means that the 150 or so pages of dense musicology per week take me ages to get through. Thank goodness for twitter. Just as things were getting bad (Bourdieu's "structured structures" and "structuring structures, are" as David McGuinness replied, "a crime against language and clarity of thought"), I stumbled across @YourMomAdorno, which takes quotes of musicology's champion of privileged pedantry, Theodor Adorno, and replaces "music" with "your mom." "Your mom has abolished the rubbish of former times by imposing her own perfection, by prohibiting and domesticating dilettantism." That's better.

Just the reading would be ok, I think, now that I have a printer and don't have to read the scanned articles from the screen and go blind in three weeks. But I also have a research assistantship which I must admit to being in denial about. Don't get me wrong, it's a very cool project indeed, teaching computers to read early notation, and we have a very beautiful manuscript to work with, it's just time that would otherwise go into nesting in my lovely new apartment, so I'm in denial. Part of my duties includes blogging about the project, so one of the reasons I haven't been blogging here is that I've been paid to blog there. What a sell-out. It's not nearly as therapeutic if that makes it any better.

Besides reading and getting my feet wet in the music technology lab, there was a little bit of time to explore Montreal with Ann. Among other activities, we went to the Jean-Talon market, and you wouldn't know that it's supposed to be a bad year for pumpkins. 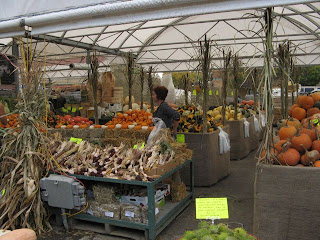 I've been back to my puffball spot a couple of times to find that while my three mycelia (mushroom "plants") are indeed producing, whoever is in charge of mowing the lawn of the baseball field they're on is a bit too keen. Very sad indeed. On a semi-failed attempt (I brought back two wee puffballs), I did see traces of a fairy-ring, which was cheering. 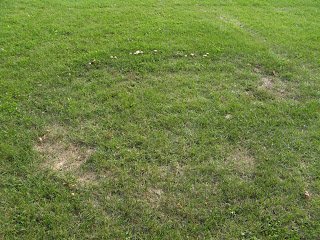 On Thursday, Ann and I boarded a plane back to England, where we and other friends attended the wedding of Gawain Glenton and Kirsty Whatley. Having spent all possible gift money on my plane ticket, I wrote them a 5-part canzona on a very silly theme that Alex Potter had come up with years before and we played it before the party got going.
The day after the wedding I went food shopping with Josué so that we could use the kitchen and big dining table of our lovely Updown Cottage in Shaftesbury and it wasn't until I'd got home with the ingredients for pumpkin pie that I realized it was Thanksgiving. Strategic loveliness followed: after a pub lunch and a ramble through the countryside, we drank real ale, cooked up lamb roast and had ourselves a feast, followed by pumpkin pie and Highland Park in front of an open fire.
Now I'm back in Montreal again, which brings me to the third reason I've not been writing as much: it feels like home here. Starting this blog was something I did when I moved to England last May to keep a sense of stability in my life, and it worked very well. Now I'm finally in a place that feels like home again, which takes over that function even better. I will continue to write of course, but it feels like a luxury now, and not a necessity to keeping me sane the way it did last year.
I've run out of pictures because after dropping in Susie Napper's her last night and having a cup of tea once again in her kitchen, I left my camera on her counter. Which is fine by me - it gives me an excellent excuse to go back again today!

Posted by Catherine Motuz at 15:43