In one week I'll be flying back to Europe again, and I hope very much that I'll be able to partake a little bit in the slower pace of life over there. I have no regrets about coming back to Canada, but the sheer volume of interesting, urgent projects which fill the same mental and chronological spaces here is astounding. The musicologyology class which featured in the last post has had a few ups, in particular an article by Rob Wegman, writing that just because we've identified our own narcissism in music research doesn't mean we should just abandon it altogether. Amen. Most of my margin notes were batmanesque onomatopoiea: "Pow!" and "Wham!" annotations whenever he wrote something that poked a hole in new musicology's self righteousness. The next few presentations involved music that could be heard, too. Which reminds me that I mustn't write too long as I have to prepare a presentation on Schubert's homosexuality. I'm slightly offended by the idea that someone's sexual orientation necessary changes the meaning of someone's music --which is excellent I suppose since I tend to absorb a lot more information once I've begun situating my position in relation to it.

My other work at McGill, on the SIMSSA project, has been more and more interesting as I get more involved. I'm slowly getting used to being called "our resident musicologist" too.

Now I'm preparing editions for Saturday's concert, which is a bit of a shocker as I thought it would take me 10 hours and I think it'll be more like 30. I always forget that being a little myopic and not liking page turns is a recipe for endless tinkering layout perfectionism. I've also made a little page on Facebook for La Rose des Vents to tide us over until I can organize a proper website, which has the interesting effect of making having just founded a band seem much more real.

Among the many headaches involved in getting this concert together has been working out which organ to use and in which tuning. Instead of the ideal 466 organ at meantone, we'll have a 415 organ in Valotti, which sounds out of tune to me (because it is) and means making lot of transposed parts with lots of sharps in them. After losing some hours of sleep to being riled up about this I was reminded by a friend that letting myself be offended was in this case not very productive.

I went to Kitchener a few weeks ago for the sole purpose of admiring my nephew and my newborn niece Audrey, which was lovely. I was very happy to see that the government has finally pumped nearly a billion dollars into improving passenger rail. Still not enough to give us high speed nor, it would appear, to upgrade the luggage carts in Toronto Union station from disused Victorian farm equipment: 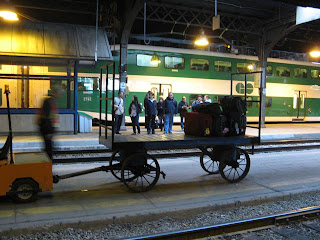 At least they've replaced the horses
One thing that I love about being back in Montreal is the sheer quantity of sushi available. There is good sushi in Kitchener too, but with small children it was better and more fun to make it at home. 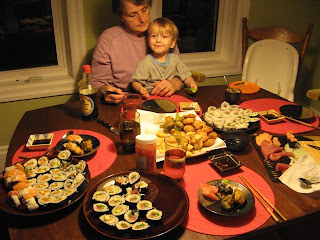 Liam about to tuck in
I got distracted this afternoon from edition making and started looking up the easter eggs hidden in software and operating systems - beware! If you click, don't get carried away. But if you're on OSX, do hold down ctrl+option+command and press 8...

later...
Now I've practised too and am feeling quite lightheaded. Lots to do in the next week before I go again, so please pardon if this spot continues to be sparsely populated... once I'm in Vienna I hope I'll have a bit more time to write!
Posted by Catherine Motuz at 04:11