I just started to write my dissertation, and decided that rather than attempt to deal with the immense pressure of actually writing a dissertation, I would write a journal instead, but make it mostly about my dissertation. A few paragraphs in, I realized that I could write this stuff into my blog instead... Of course I have no idea if this is a good or bad idea yet—surely it's a terrible idea! Because what is sure that while I'll write in prose (I have copious notes elsewhere), it won't be particularly coherent until much later on. But at least it may be more amusing for me if I post a picture now and again and allow myself to be entertained by mild digressions. Here's what I've done so far.

First day of real writing—I suppose I mustn’t clog this up so much with journal, but why not write a bit about the process as I go? That sentence was interrupted by choosing an appropriate desktop image with which to work—not a minute in and a distraction! Maybe the inclusion of a wee journal will help minimize these? On to the writing itself!

Reading Christine Ross’s book on Melancholy vs. Depression in Art. She makes the point that the link with melancholy and genius began to dissipate at the end of the 19th century because of the medicalization of depression, and the view of it as a subjective deprivation of creativity rather than an intersubjective (her word) creative but sad state. This makes some sense—the first is disconnection, and the second a sense of connection to other people feeling the same. She points out that treating depression with drugs changes the emphasis from mind to body.

One of the more interesting things for me was the notion that the melancholic is engaged with a lost “other,” while the depressed person is constantly preparing for loss. The melancholic is therefore in a state of deep connection, while the depressed person is numbing themselves as a defence against a nebulous but impending loss. One is highly emotional, the other highly disconnected.

Aesthetically, what is interesting is that we associate Romanticism with subjectivity and call the Classical and Baroque the Rhetorical, emphasizing the communal nature of the passions—we say abstract now though. But communal is perhaps more accurate, because abstract implies a disconnectedness, but rather I think that when someone looks at the depiction of melancholy or listens to sad music, they are engaging in a shared experience. Of course. Why do we say abstract? Maybe we say idealized... People who like art tend to have an idealist streak so that makes sense.

Anyway, Ross's book is making the case that the kind of intense individuality and subjectivity we associate with Romanticism (think Beethoven) actually came about some time later. This makes a lot of sense—it's also when I found, in my paper on when and why performers became obsessed with following scores to the letter, the idea that it was necessary to negate one's own personality in order to do justice to the composer. Suddenly there is no shared experience, just a sole subjective one to be honoured. I'm thinking around WWI, by the way.

I'm sure you're wondering why I'm starting with this book, when my dissertation is about musical expression in the Renaissance. There's a simple answer—because it's just been recalled to the library! It is not the first book I've started reading, but it's important to get a little way in, I think, to rack up enough confidence to start publishing one's own ideas and interpretations to the Internet.

It occurs that writing into my blog might make dissertation writing a less lonely process than I fear it might be—I'm sure that is the main reason many people have for avoiding it. Not that I expect you, loyal readers, to comment in order to entertain me, but I am likely to be a bit better of a writer knowing you might be reading. I just realized I ought to be making notes of page numbers and such for myself—I'll put those in the comments. Oh, and I can use the tagging function to help me later on too. Interesting experiment. And here's how it continues...

These writings (and others) were carried through the Middle Ages and into the Renaissance. They became really important again with Marsilio Ficino, who was both a court physician (to the Medici, I think) and a musician—he recited Orphic Hymns to the lira da braccio. (Quite a new reconstructive recording of this little-known repertoire has just come out and is getting all sorts of stars: Sulla Lira.) Ficino had good reasons for combining music and medicine, which I'll tell you all about tomorrow, as I sum up Brenno Boccadoro's chapter on the same.

It's 10 already—I didn't expect I could do more than 20 minutes, but I think it is more fun to write into a blog. When I was writing my notes this morning (I am now trying to read a mere 45 minutes a day—not nearly enough but just over the threshold of worthwhile). I mused in my margin that it would be far more entertaining to read a dissertation in the form of correspondence. Such a better literary genre than the essay. I think this blog will have to be the halfway point—the final version will become an essay of course—it must—but perhaps I'll be able to write it in a digestible way.

Re-reading a tiny bit "They became really important again" seems too far off in the other direction—reads like a children's book, no? I'll try to become a better writer in the course of all this.

Here's the picture I put on my desktop, btw. From a hike near Interlaken in 2009 I think. The first crocuses are just starting to bloom in the front garden here. 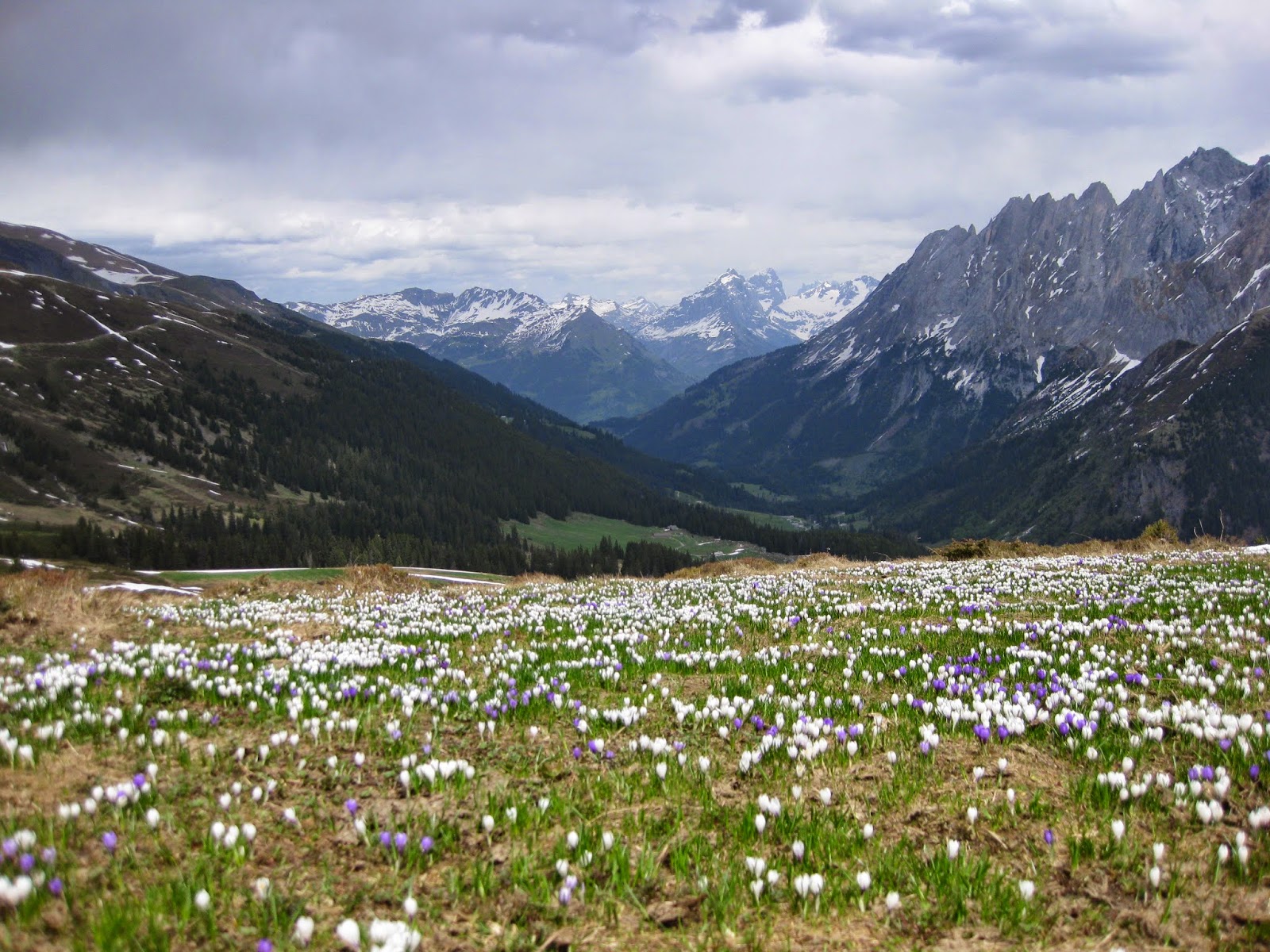 
It occurs to me (and now I really have to go into McGill, so, quickly!) that the medicalization of melancholy is not a 20th-century phenomenon at all, but that "black bile" is a bodily syndrome too. I wonder if there is a parallel between Ross' ideas and the ideas of melancholic temperament vs. melancholic disease that were being thrown about by poor old pseudo-Aristotle (better to be forgotten by posterity or be pseudo someone else?)—the former still had associations to genius, but the latter was a bodily thing to be cured (all from Saxl et. al.—will surely rehash later. So much to investigate!