If I'm a little slow to actually tell you what my dissertation is about, it's because—as you'll soon see—I'm not *quite* sure myself. It's about musical expression in the sixteenth century, that much is sure, but that topic is far too broad to write a book about in two years' time. It's more of a career project, and I hope it will work to my advantage that the dissertation feels like a beginning and not an end. I think I will probably narrow it down to looking at the expression of melancholy 1510–1530 or so. I will probably narrow it down to certain types of music too, defined by nationality, text (or lack thereof), and performance context, but I hope what these ought to be will emerge through my reading.

I've been continuing on with Christine Ross' book today—not because it is most important (in fact it is almost tangential), but because it has been recalled to the library and I have to return it tomorrow. Her book, The Aesthetics of Disengagement, deals with problems of sadness in contemporary art. Art historians have been discussing the aestheticization of pain seriously for centuries—in music, from what I can see, we have been slow to follow. There are art history books and articles much closer to our time period–notably Panofsky and Saxl's famous 1923 study of Albrecht Dürer's engraving from 1514, Melencolia I, and the reactions to it by Walter Benjamin (1928), in Giorgio Agamben's Stanzas (1977), Max Pensky's Melancholy Dialectics (1993) and most recently, Laurinda S. Dixon's The Dark Side of Genius (2013). By looking at reactions to this single engraving over the last 92 years, it is easy to see how it is interpreted in light of our own times.

In case you've forgotten, this is what Dürer's print looks like (it is the desktop image to the other dissertation workspace—there's not a chance of writing it with only a single screen!). 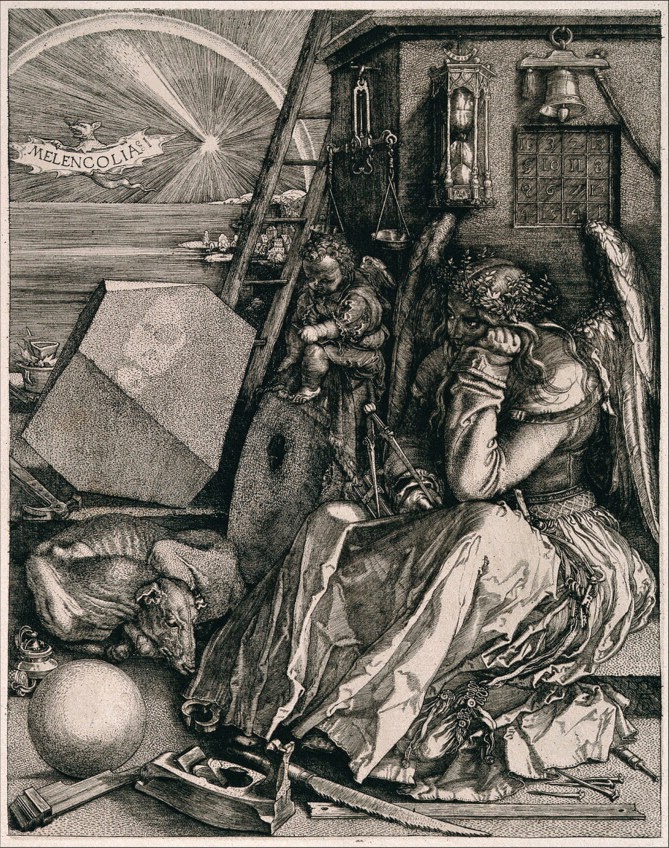 I have yet to read Panofsky and Saxl's take on this print, but from the summary and reactions to it by Ross and others, it looks as though their study takes the stance that the winged angel has succeeded in transforming melancholy from a disease of contemplation into a kind of contemplation that more befits an artist, hence the symbolism of the tools of making and measurement. (Expect a corrected version of this reading sometime in the future.) They base their ideas on Ficino's statement that turning voluntarily towards Saturn, i.e., engaging in "divine contemplation," is a way to counter the detrimental effects of melancholia. Walter Benjamin challenged this idea of the angel as a heroic figure because in Ficinian terms, Saturn is still a malefic influence, and melancholy is still an unhappy state. Rather than interpreting artistic genius as existing on a continuum with pathological melancholy (as suggested by Pseudo-Aristotle in Problemata XXX), Panofsky and Saxl suggest that the first triumphs over the second somehow.

It seems to me that Benjamin is accusing Panofsky & Saxl of over-romanticizing this melancholic angel. I tend to agree—I was a bit surprised to read that she might be a heroic figure, and Ross seems to agree. To me, if Dürer had wanted to show her in some kind of Divine Contemplation, he might have raised the point she is looking at a little higher—though it is worth noticing that she isn't looking at the ground either. (I shall need to find a real art historian to find out if these are indeed relevant!)

If Panofsky and Saxl are being overly Romantic about Dürer's angel as some kind of suffering artist, Benjamin seems to be a bit more influenced by the psychoanalysis that was so prevalent in his day. Ross doesn't say this—it's my conjecture—but she does say that Benjamin "argues that the art historians' concentration on the individuality of the subjective melancholy genius prevented them from understanding that genuine creativity comes about not in the individual but, as Pensky has observed in his study on Benjamin 'between subjectivity as such and the phsyiognomy of its object realm,' between contemplation and pathology, between creative access to order and a fall into dead nature." [tracing this discourse is getting a little complex—Benjamin was writing in 1928, Pensky in 1993, and Ross in 2006, if that helps!]

I think this is linked to psychoanalysis because what Freud did at around this time—as far as I understand—was to take the idea of the human soul and start to understand it in relation not just to itself and to a romantic, quasi-religious concept of genius (divine genius coming from a transcendent place even if not heaven), but as something shaped by all the relationships that people have over the course of their lives, to people, objects and ideas.

It had apparently been traditional at their time to interpret the unused instruments of geometry in Dürer's painting as an expression of the inadequacy of geometry, essential though it may be to artistic craftsmanship, as falling short, unable to bring art into the realm of the sublime. This strikes me as very Romantic indeed, and I am now quite curious to read Giorgio Agamben's rebuttal of this idea. Is it possible that Panofsky and Saxl's ideas were so shaped by being formed at the very tail end of Romanticism, that we might think of their attempt to understand Renaissance thinking as an Epoch Fail?

(Sorry. In academia you get extra points for that sort of thing.)


Ross seems to suggests that Romano Alberti's 1585 discussion of phantasm—I think she means remembered impressions of objects stored in the imagination—might shed some light on why this misinterpretation took place, but ultimately sees his description of the melancholy of an artist in a different light. I'll quote it in full:

"Painters become melancholics because, wishing to imitate, they must retain the phantasms fixed in the intellect, so that afterward they can express them in the way they first saw them when present; and being their work, this occurs not only once, but continually. They keep their minds so much abstracted and separated from nature that consequently melancholy derives from it. Aristotle says [he means pseudo- of course...but didn't know], however, that this signifies genius and prudence, because almost all the ingenious and prudent have been melancholics." (Quoted in Agamben)

It would be relatively easy for a Romantically-influenced reader to think that R. Alberti is writing about the impossibility of representing transcendence—this was a very big deal in the 19th century. But it is also possible that Romano Alberti should be read with a more classical bent—a platonic view, for instance that even concrete objects are some kind of imitation of their ideal form. They seem to have understood melancholy as a kind of disconnection, so it seems possible to me that the cumulative effect of substituting imagined objects for real ones might over time make someone feel disconnected.

Just to be sure, even though Ross brings Romano Alberti into this discussion, she is also quick to say that Leon Battista Alberti, writing over one hundred years before in 1535, wrote that painters simply painted what they saw!

(The discussion of mimesis in art will of course be hugely important when we get to word-painting—which is where I will begin becoming mildly coherent, as it is the topic of an upcoming conference paper. Apparently it is discussed in detail in Sarah Kofman's La Mélancholie dans l'art (1985)).

I haven't even got to Laurinda Dixon's study of Dürer yet, but I've more than filled my quota and have practising and administrative tasks yet to accomplish today.  But I'll conclude today by saying that perhaps it is not so bad that I am starting with a book on contemporary art. I have been in Early Music long enough to have discussed dozens of times the impossibility of recreating authentic listeners, let alone authentic performances, and yet I am swayed by Bruce Haynes' argument, put forward in The End of Early Music (2007), that just because you can't attain a perfect understanding of older ways of thinking doesn't imply that it would be sensible should give up altogether. He called Romanticism "a veil" that distorts our concept of the past. By reading about twentieth and twenty-first century views on melancholy and aesthetics, I am more likely to be able to see what biases I am inevitably reading into my sources. If Panofsky and Saxl's analyses of Dürer suffered by being too Romantic, it's also possible that Benjamin's suffered from being too rooted in other ideas distinctly foreign to the Renaissance. And of course I am too, so I'd best attempt to understand what they might be.

Posted by Catherine Motuz at 23:05