I see my blog is making it out into the world rather quickly. Thanks to David McGuinness for the link - the pressure is on to keep it up to date now!

Today I faffed about until it was time to go to rehearsal. I have no regrets for the lack of productivity, I was very energized when rehearsal started, despite the repeat sensory overload which resulted in walking from London Bridge station through Borough Market, past a very impressive replica of the Golden Hind (!) and then through myriad cafes in red brick before finally making it to the Globe, where I had to pass by a table covered in little bags of fake blood before getting to the band room to set down my instruments. Then I got a costume fitting: "Take off your shirt, luv," and they slapped a corset on me. Thank goodness I'm not playing any bass parts.

In case you were wondering, yes, it's impossible not to feel pretty in a corset, especially since hiking your boobs right up to the top is a must for comfort, otherwise they just get squished back against you and you can breathe even less. A lot gets squished downwards too though: I was a bit surprised poked through my skirts and my hips were sticking out about an inch more than usual. Apparently I'll have buttock extensions too.

I wanted to take a picture, but decided to wait until I can show the costume in all its finished and tailored glory. In the meantime, a few shots from the ABO tour: 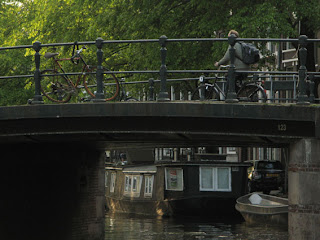 Amsterdam on the last day of the Netherlands part of the tour: the sun came out and everyone was in a good mood. This is Cremona, as seen from the medieval tower which looms above it. One of my very first jobs in Europe was playing with the ABO in Cremona in May 2005, Mozart Mass in C minor, and climbing the tower again was an unexpectedly emotional experience, reflecting back on the five years since. Having just sublet my flat and gotten ready to move to England, I had a lot of sympathy for the uprootedness I felt back then.

Both times climbing the tower I had Verdelot's "Italia Mia" stuck in my head. One of the lines is:
Il Po, dove doglioso et grave hor' seggio
(The Po, where sorrowful and sad I now sit).
The Po is the river flowing in the background here. In 2005 I ran down to the shore and stuck my hand in too.
Monteverdi was born here.


Here were my two views playing Vespers from the balconies of the Basilica di Santa Barbara, where Monteverdi was working in 1610. The organ he used was just restored a few years ago, and we played from the opposite balcony, right in front of the pipes. In the Magnificat of the Vespers, Monteverdi writes in specific organ registrations. Apparently though, when our organist tried to follow his instructions and use the Sifara (a vox humana stop - with vibrato added), Maestro said "Oh, don't use that! I hate that stop!" Oh well. 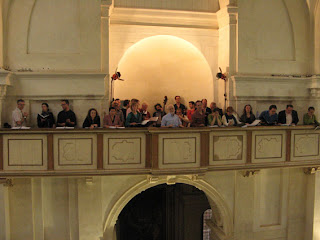 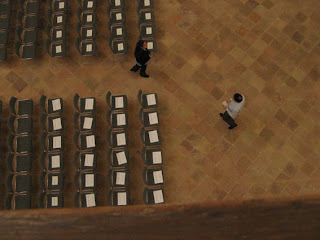 (Yes, I tied my slide to my hand.
Yes, it was an extra effort in the concert not to empty my "water" onto the heads of the priests sitting below.)

And last but not least, on our travels home we had an extra hour changing trains in Mestre, which is just over the lagoon from Venice. It seemed a bit sad to pass up, so I hopped on the train over the bridge and spent my last half hour in the sunshine by the grand canal: 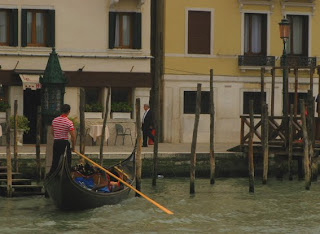 Posted by Catherine Motuz at 00:17