Getting to the end of this London stint, slowly but surely. Today I'm making up for not having been a tourist much and going to see my colleagues perform in a matinee of a contemporary play at the Globe... then off the the Royal Opera House to see the obscure Niobe. I've gotten suddenly sentimental about the Globe again - the time away did me good! I've changed my focus though: since I know the show so intimately and don't have to concentrate on remembering how it goes, I'm consciously concentrating... on how it goes. Sounds boring but otherwise the powers of concentration begin to flag, you know - this way I have a lot more energy and its good practice. And, I think it's as a result, Sunday's shows were some of the best I've played.

Monday was interesting. I and some other Baselites played for a Banquet at the British Library. It felt very authentic somehow, playing at the beginning and end of a meal, colleagues singing, usually to divided attention during the courses - you read descriptions of this kind of thing throughout the 15th and 16th centuries. We were proper servants, entering through the side entrance, staying out of sight when not musicking, and the organizer (UK: organiser) admitted freely that it had not even occurred to her to see to there being any food for us over the course of the long evening (but managed to come up with some sandwiches in the end, and my Waitrose Sushi was very good). Somehow it was fun though - the music was all quite good and it seemed somehow more natural to let the audience decide for itself when it wanted to pay attention and when not to. I have been slightly envious of actors, as theatre audiences provide them with so much feedback, while concert audiences are trained to stifle even their sneezes. So, when the audience quietened down for Gawain's Dowland songs and remained utterly still for the Ravenscroft canon "Musing," the performers could feel a sense of victory more than in a normal concert.

Earlier that day, I did a bit of London safari, going with Helen, Claire and Kirsty to Primark (no link, trust me on this one). Primark is a very large store of very cheap clothing. I decided to play along and, quite enjoying the buzz and the vast number of people, filled a basket with things I sort-of needed: new gloves, a black sweater (UK: jumper) for very cold concerts, a purple concert shirt and white v-neck t-shirt. That was fun. Didn't buy any of it. I looked in the basket, you see, pretending I was peering into my wardrobe at new items, and felt dismayed at how cheap and soulless they were, almost certainly the result of extortion, likely to fall apart in the next few short years. So I picked my own (amazing, green) fall coat out and put it on, leaving the basket there with all the other abandoned baskets of disillusioned shoppers.

Then Claire and Kirsty and I went to Selfridges, because I'd never been to Selfridges and because one could get a pie in their food court. I wandered through to find the toilets, taking in a level of overt affluence as embarrassing to a Canadian as a pie-eating contest would be to an Englishman, and was utterly appalled when I had to go through a forest of decked-out conifers to get to my destination. During lunch (pie for Claire, jacket potatoes for Kirsty and me), a man came around to clear up the boxes we ate out of, on which were written: "Please recycle me!" So I asked him "will you recycle this?" and he said "It's going in the bin!" (which is UK for garbage - Canadians only recycle in bins), and I said "no, you can't have it then."

So we all three left Selfridges with our pie- and potato-smeared boxes until we found a public recycle bin: 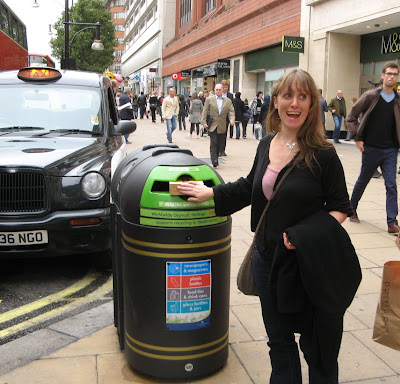 These are my exploits outside the house. Inside, I've been reading both from books and from the articles I've downloaded onto this computer, trying to narrow down a Ph.D. dissertation topic. Saturday's trip to the library to find a translation of Joachim Burmeister's Musica Poetica of 1606 also yielded a copy of Anthony Rooley's Performance, which I picked up too - he was in charge of the banquet concert and it was interesting to see his written ideas of performance come out in his way of speaking about music on the day.

One evening, I forget which, I was on the Internet looking about when I regretted not being Scotland again yet, because my curiosity is piqued by the Scottish Mental Health Arts and Film Festival, which starts today and runs through Oct. 24 all over Scotland. I think there's a difficult built-in paradox to making art about mental health issues: Art is, in my opinion, about building and exploring our connections to the world, while depression and anxiety (the focus of a lot of the events) tend to break these connections. How do you communicate a loss of connection to the audience that you're trying to connect to? An audience can empathize with sadness, loneliness, even despair, and even take pleasure in such empathy. But they can't empathize with depression because if they were to actually succeed, their empathy would vanish and the story would appear worthless. Normally they don't succeed of course (probably a good thing), in which cases the audience, sensing they're about to be hit over the head by someone else's demons, shuts off, and only feels alienated and probably also either guilty or angry.

So how does one communicate this one feeling of disconnection? Or does one try? I mean, if it is possible - if you gain an audience's trust and endear them to a character so much that they're willing to follow them into such a state, is it ethical? Does it not do violence to its audience? Does it not betray its faith by leaving it in tatters? Or for those who don't follow, simply leaving it behind? What, Artist, were you trying to give them, or were you simply indulging in "self-expression"? Looking at the website, the SMHAFF seems to be taking an honest stab at talking about mental health issues from every angle, including lots of comedy and good storytelling, hopefully lots of understanding and sympathy and digestable glimmers into the world they're trying to explore. I wish I could go check it out for myself and see what they've come up with.

In the meantime, contemplating the issue does make me think that a sixteenth-century approach to arousing emotion is the way forward if we are to become more understanding people. That's because this art of persuasion is not about self-expression, it's about moving an audience to feel one way or another, engaging their passions and giving them the chance to explore their own humanity, but doing so responsibly. There's a famous quotation describing the playing of lutenist Francesco da Milano before 1546:

"making the strings languish under his fingers in a sublime way, he transported all those who were listening into so pleasurable a melancholy that...they remained deprived of all senses save that of hearing...and I believe that we would be there still, had he not himself - I know not how - changing his style of playing with a gentle force, returned the spirit and the senses to the place from which he had stolen them..."

How can this melancholy have been so pleasurable? It can be, I think, if they felt that what they heard in their ears resonated with, or expressed something they already felt...that's good storytelling. But notably he took pains to return them to the real world. Why? Probably so that, having been left in a headspace where they could get on with their day, they would trust him enough to let him transport them away again?

If artists are to attempt to tell stories of serious mental health issues (and I'm glad to see that they are), then they need to first earn the trust of audiences. Far from feeling awkwardly like they've paid to become part of someone's therapy process, the audience has to know that they'll get something out of following a character, musical or literary, in its journey, and this takes great craft from the artist. I am not saying don't delve too deep - not at all - but remember that pleasure derives itself from a sense of connection, to anything from the most joyful to the most morose but it has to be a sense of connection. If you're going to try to take away this pleasure, be sure to return it again, or the audiences will stop listening.

This of course takes a lot of trust in their audience too - that they will try to understand an issue that you only gently prod them with, they are sympathetic by nature. There is no self-betrayal in telling stories rather than exhibiting demons - indeed my own memories of more desolate times are not those times themselves, which tend to blur together, but are rather the tender stories that hover around the edges of hard times. I remember vividly, for instance, one autumn evening, lying in bed reading - I was sixteen - and feeling a cool draught that came in through my window and touched my face - through the heavy, stagnant air of my bedroom suddenly the scent of falling leaves, the coming of winter and snow - and being reminded gently of the passage of time, and feeling happy at this sudden sense of connection to the world. Yet I know, looking back, that such a moment could only have moved me so much that I remember it now if it also came as relief, that for such a subtle moment to acquire such tenderness, it must have been juxtaposed against a more barren moment that came before. And so I understand not only that sixteen year-old, but another one as well, and I do not think I have done myself any disservice. Nor, I hope, my audience.
Posted by Catherine Motuz at 22:22