Just pulled out of the channel tunnel. As the light of the hazy sky begins to appear, this French dawn is heralded by the chirping of text messages, each arriving to tell its owner that their phone will be privy to the best roaming rates. The haze has always bothered me about France: the air lingers here just a little too long, the salty English breeze will be replaced by the dusty smell lingering from the bread which was baked two weeks ago.

I thought I was booking a reasonably late Eurostar, but I still wound up getting up at six. Oh, alright, ten past. As I'm almost always traveling after a late night, I've gotten into the habit of not packing until the morning I travel, when I'm generally more efficient. My empty suitcase used to keep me up the night before, but last night I put my passport, tickets and sheet music on the table by the door. Realizing the rest is icing anyway, I slept rather well.

I have three trips to bring everything back to Basel, so to make the later ones a bit easier I have most of my camping gear with me now. The train people confiscated my half-empty canister of propane so I suppose such an object can only cross the channel by ferry. I retaliated though when they wanted to take my more expensive aerosol "nano nässe blocker" - to waterproof shoes and bags and such - and came out victorious. But I look like a vagrant hauling around my tent (which I haven't unpacked since Scotland) and my stickered trombone case along with the cute little salmon suitcase which otherwise makes me feel rather sophisticated.

Having traveled regularly since moving to Switzerland, I like to think I've become savvy to some things - silly but crucial things like checking that there is water before putting soap all over my hands on trains (not so bad on the German trains, where the soap is powder, but disastrous on a Frecciarossa). But in many ways I'm still quite stupid: I often don't buy a coffee with the hope that I might sleep on the train, despite my almost null track record, and I always bring exclusively heavy reading with me - this time a half-dozen scholarly articles on this computer, and then I'm so tired and mentally drained by the time I've rushed around and gotten myself onto the train or plane to begin with that I can't read more than a sentence every five minutes or so. So when I saw a book of Roald Dahl short stories sitting on top of someone's garbage bin (UK: wheelie bin), I nicked it and read about boys riding on the backs of giant turtles instead. And then I bought a coffee. And the most beautiful fruit salad I've ever seen: 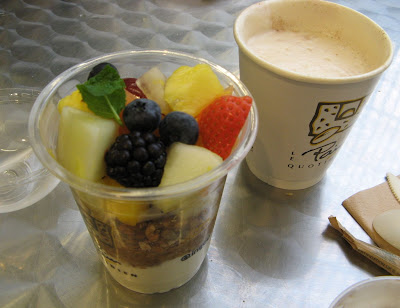 The stopover in Paris was absolutely fine: I still am incredulous when I get to the staircase up and down which travellers must schlep their baggage between the Gare de L'Est and the Gare du Nord. I read a few more stories in the newly-renovated Gare de l'Est, and was mildly shocked and quite amused when a lady behind me opened a bottle of Coca Cola and it sprayed right onto my neck and shirt.

When I got off the tram in Basel, on the first block towards home I passed a man sitting outside at a Restaurant eating Rösti with cheese. On the second block, a lone piccolo was playing Fasnacht marches in a bedroom above. When I got home, the first thing I saw was an indignant note from the landlord, looking for who to blame for ... a piece of wood that keeps falling off the doorframe. Yep, I'm definitely back in Switzerland!
Posted by Catherine Motuz at 00:27