A day off from rehearsing for an I Fedeli recording of mostly Italian madrigals played instrumentally. We're recording in a little church in a tiny village nearby in Germany.

Finally the sun came out yesterday after days and days of grey, so I met the car that was supposed to drive us all from Basel, handed over my trombone and hopped on my bike. It was around 14 km and mostly flat, and I would have beaten the car (which had to go to the airport first) had I not stopped to by some apple cider on the way. I do love cycling to rehearsal because, especially when as in this case there's a bit of a hill at the end, I arrive mostly warmed up. For me at least it's mostly the breathing apparatus that needs serious warming up - the lips too but they only take a few minutes. Cycling home in the bright moonlight was fine too. 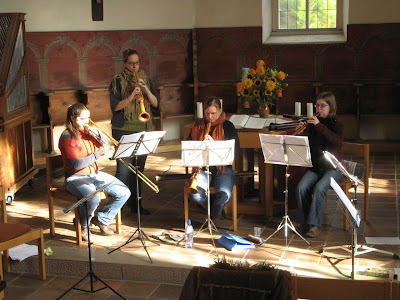 Rehearsals have been interesting - a lot of practising playing with varied articulations and wide dynamic ranges, but then when yesterday we added organ, a lot of this detail got obliterated by it's power. It is nice to play with a proper organ - you can see above that the pipes are properly almost 8 feet and not stopped 4-foot pipes like many of the wimpy wooden ones we more often play with, but it will be interesting to see tomorrow and during the recording if we wind up a) sticking to our guns and continuing to play softly in the quiet bits, letting the sound of the ensemble meld into the organ more than one might expect, b) adapting by narrowing our dynamic range from the present "quiet - loud" to "sort of loud - quite loud", c) scrapping the organ in some pieces, or d) finding some other genius solution. I'm opting for d) but unfortunately nothing genius springs to mind.

Just finished baking the first pumpkin pie of the year and I think it's cooled - I hope you'll understand that this is a valid reason for cutting this post short.
Posted by Catherine Motuz at 21:36