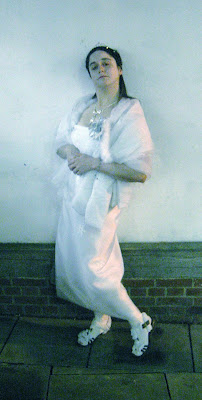 There is so much going on that I have barely any time to write, but I'll at least try to skim over the past week and a half. The picture that you see here is from the Globe end-of-season party, with the theme: Kings, Rogues, Queens and Strumpets. So, here I am as the Jadis, or the White Witch. If you look carefully you can see the snowflakes I stitched into the skirt at 2 the night before. These brought me consolation when I saw the two other people who had come as snow queens.

It was an odd end-of-year party because actually the season was extended by a week - there were still eight shows to go. I had a concert in Bern on Wednesday though, so Claire played the first three and I headed by train back to Basel.

Getting out of the Eurostar there were some little plaques devoted to famous French people, and I first of all noticed this one: 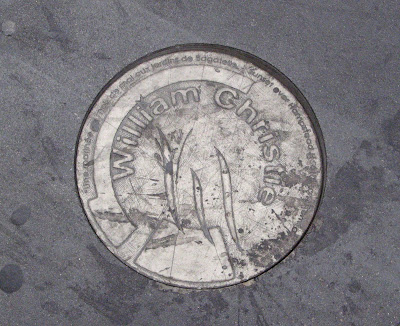 I arrived in Basel with the tough choice of whether to go to rehearsal half an hour early, but hungry and exhausted, or five minutes late, relaxed and full of food. A quick phone call to obtain permission for the five minutes was made (can't do that in orchestras) and I managed to stay jolly for the whole evening.

The rehearsal schedule in Basel was light enough that I finally had the chance to give Sophia the pair of roller-skates I'd gotten her and try them out - twice! Once with me in boots and the other time with me in my roller skates and protective pads. I woke up the next morning with the strangest stiffness from supporting her weight on my fingers whilst skating backwards. 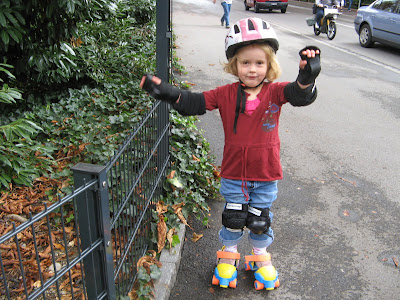 Sophia Victorious!
The concert on Tuesday was a blast. It was to open this exhibit about the travels of Captain Cook at the Historisches Museum in Bern, and involved music of William Shield from the 18th-century Pantomime OMAI, Or, a Trip Round the World. The bass aria involved a cadenza on the word "ascend," which proved slightly problematic as it already started on quite a high note, but it didn't make sense for the singer to sing anything but rising notes, so in the end he sang a scale, and when he got to his top note, I, trombone aside carried on singing for another octave up (with a cheeky appoggiatura to finish it off) to the surprise of all in the audience. I had only suggested it as a joke in rehearsal, not wanting to steal someone else's cadenza, but it was too silly not to do.

By the time we got to the trio song "Sound the Conch", I got to step forward and sing with the tenor and bass and this was loads of fun, I should do it more often. As I had been playing trombone the whole concert, I was pleased that the audience seemed nevertheless surprised when I put the conch to my lips and gave it a blast: 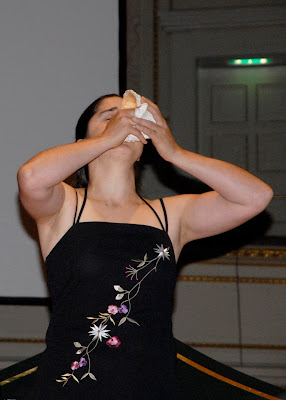 Afterwards we were invited to the exhibit itself, where sure enough there was a proper Pacific conch horn on display with other exotic instruments. Don't ask me what the little thing on a string is though, I never figured it out (on the other hand if you know, please do tell!) 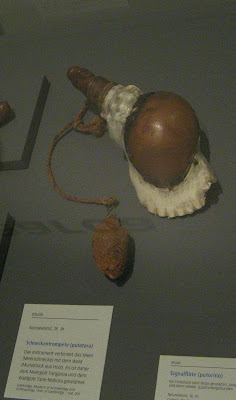 Conch and, um, thingywhatsit
Afterwards some chips and salad at Löschberg with Alison, who'd come to the concert, and I just made the 22.04 train home. I do like 5 pm concerts!

The next morning I flew to London very early, but with the time change on my side managed to sleep from 9:30 until noon before heading to the Globe to begin finishing the run. Friday I met up with Vonny, with whom I'd stayed at the very beginning of the summer, and we had a picnic on Hilly Fields before walking through Brockley Cemetary on a perfect autumn day. 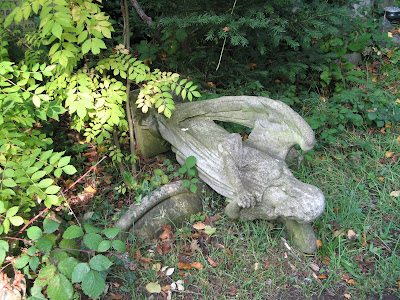 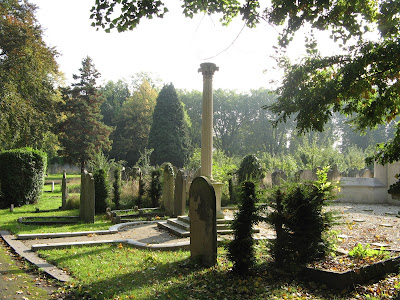 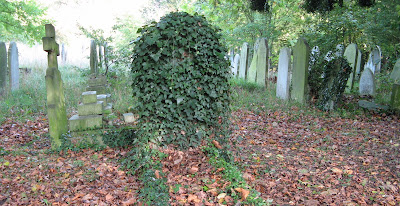 Saturday I went back to the Podiatrist for my how-are-the-orthotics going checkup - correcting the pronation in my left foot seems to have been a good thing for my foot and knee, mostly. I had thought that a bit of numbness in my toes was just because the orthopedic insole had a ridge in it, but it's worse than that - on top of the problems I knew I had, I also have a neuroma - arse. So now my insoles are a bit more complicated to try to correct that too.

Saturday's final shows were quite emotional, but it ended very well with a full house (including Ann and Caroline who scooped up two yard tickets which had been returned) and an electric performance from the cast. I didn't stay too long in the bar to say goodbye, but caught the last train home, knowing I still had lots of packing to do. The next morning I was sent off with a Proper Fry Up and a drive to St. Pancras with all of my things - thank you!!!

Claire met me in Paris and after dropping my stuff at her place, we wandered around the nearby Parc des Buttes-Chaumont - lovely park if full of people. As it was the day after a 4 1/2 month project, it came as no shock that I was obviously coming down with something, so supper was followed by something very peaty to try to kill whatever was in my throat and the watching of Claire and Nate's recital DVD - bravo!

Claire won nicest person of the decade for getting up at 5 am and helping me take my things on the Metropolitain to the Gare de l'Est, where I caught the 6:24 train back to Basel.

By Tuesday I was properly sick and had the odd experience of being hardly able to stand or speak, but when, that evening at an archaeology conference in Stuttgart, I went to sing a 13th-century chant from the Scottish Inchcolm Antiphoner, accompanying myself on a hammered lyre, everything worked fine. Funny how that happens.

Since all this I've had a few days off, getting better and catching up with people in Basel. Yesterday's achievement involved baking apple-oatmeal muffins and bringing them along with a flask of hot apple cider to the SBB and consuming it with Alison on platform 12 while she waited for her train. She went from Switzerland all the way back to Scotland by train, and this morning I got a text telling me that the rest of the muffins were being happily consumed in Glasgow. Yey!

For an utterly absurd celebration of muffinry, click here.
Posted by Catherine Motuz at 20:36