Got up early this morning when my internal barometer said it might just be worth it. Surely enough, after days of oppressive grey there's a bit of blue, yellow and even pink in the sky. At last! When yesterday's gloom got a bit too much I went out and bought some gloves and a large orange sweater to compensate. (UK: Jumper, yes I know - now that I'm back in Basel, do I really have to keep translating?) On the other hand, when it's this cold outside my Caol Ila does seem to taste better...

This week I've been reading up on expression in sixteenth-century music: from philosophical treatises to singing technique, modular analysis to the analysis of rhetorical tropes, mathematics to aesthetics, and the acoustics of great churches to the meeting-rooms of the Florentine Camerata. I'm inclined to stick with it all not simply through fascination, but rather because the question of why we should perform expressive music and how we go about it seems still relevant to me today, and some of the tensions they felt then about it persist. What we find pleasing without investing much effort in it still depends on the same well-crafted smoothness and having enough variety (thanks Tinctoris), and we still seek out this music for similar reasons. Meanwhile, how in the hundred years after Tinctoris (c. 1500) did melancholy go from being a sin (almost a deadly one as it was a forerunner to sloth) to being pursued by cults of poets as the path to enlightenment?

I feel as though I've been waiting all my life to start this kind of reading - I've been long interested in these topics but when asked when I would embark on such a journey always answered "when I can sit still long enough." Probably the newfound ability to sit (relatively) still is also why this year I started this blog.

Two pictures have come in from last week's concert in Stuttgart: 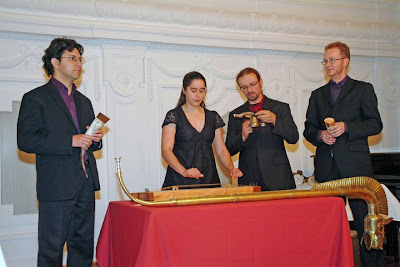 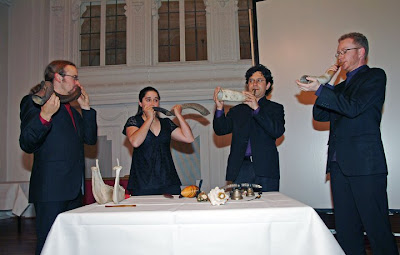 Looking very serious whilst blowing our horns
Posted by Catherine Motuz at 11:40