I've marked this New Year quite fittingly by moving back into my flat - I moved out just before this blog started, and I can't tell you how lovely it feels to write my first blog entry from my kitchen table. My subletter left things in a pretty good state altogether - the dishes are intact and the plants, especially the herbs on the windowsill, are flourishing whereas when I'm living here they are usually dead by now. But, he did suddenly decide once the cold weather hit a few weeks ago that it was ok to smoke in here. When I mention this to people they always ask me if I'd put it in the contract, and it is true that it's a preference that I had stated only verbally. Somehow I'd believed that, just as "Do not leave the flat smelling of rotting fish," is a bit of a given, so might be "Do not leave the flat wreaking of a 70's hotel room with yellow tar stuck to every surface." Apparently not. As a smoker, he does not smell it at all of course. But can he not see that my little blue Rajasthani wall-hanging now has a yellow tinge? Can he not feel that the sugar bowl and toaster are sticky, or that the dust everywhere doesn't come away when you wipe it with your finger? It wasn't going to feel like home until the smell was out, so I've spent the last 3 days with the windows open, the mattress and rug outside. Rejecting advice to simply cover up the smell with incense (which makes me feel as though I'm in a Catholic church), I've laundered the sofa and chair upholstery, and the curtains, and with his help wiped down the main surfaces with chlorine and soap. It still smells a little bit, so the last step is that my friends are going to come around this afternoon and we're going to make some curries - if I must cover up the smell, then fresh ginger, cinnamon, and cardamom beat out smoky sandalwood a thousand to one.

Last night I went to a little celebration in France, where we played "Siedler von Catan" before heading outside into a scene which made me wonder less what the London air raids of WWII must have felt like - shots and explosions on all sides from the many scattered drunken, inept but excited and a bit too well-outfitted pyromaniacs of Huningue. Apparently they are inspired by Napoleon, who placed his cannons there to fire at Basel. Did he fire? I do not know.

I have finally been skating in Basel, twice. It seems criminal to have to pay to skate after living in Ottawa with its 200+ free rinks, but here we are. The first time was a bit of a disaster, as I took little 3-year old Sophia along. Never take a child to do a new and exciting activity if they've missed their nap. The first scream was that the rental skates were black ("pink!") and then before we even got to the rink "Don't Like It! Too Slippery!" So I went the next day on my own. I think I've mentioned some goings on in my left knee and foot. It was very clear while skating that my left foot turns in slightly - skating it simply runs into my right foot. Aha. Any maneuver using the outer edge was also very trippy. It got easier as I went along though, so I'm pondering going quite regularly to try and train it back to a normal position.

I'm also pondering squandering the Euros that Lufthansa gave me for flying a day later on a nice new set of cross-country skiis....

Christmas day in Basel was quite nice though a bit sad not to have my luggage yet at that point (it took a week for them to send it along) - my neighbours presents are still undelivered as they're away. But on Christmas morning I was woken up at 7 very gently by a choir singing outside the window in the gentle snowfall. I turned on the light and unwrapped my presents and cards which I'd put on the bed the night before. After playing a Mozart mass in the Catholic church (lots of incense), I headed off to go and cook with friends. This is how turkeys come if you buy them at the market in France. 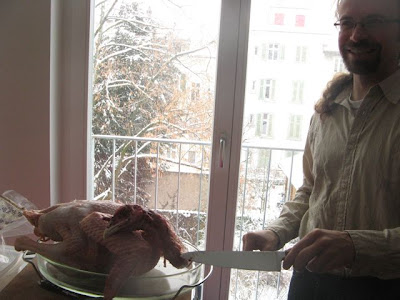 Nate and a turkey with all but feathers

Despite the fact that they've always turned out pretty well, I've always been a bit worried cooking turkeys in my old gas oven, so I was quite excited at the new possibilities of the state-of-the-art oven we had chez Ann. Soon into the process, I realized the sound coming from the oven meant that it was a convection oven, but as the temperature was already on the low side of what the Internet recommended, we left it alone. Somehow, after 3 and a half hours of desert air blowing across the Turkey, it was the driest bird I'd ever had anything to do with. Convection ovens suck. Gas ovens rule. There. I said it.

Nevertheless, it was a pretty good meal, you just had to get the meat from right next to the bone. 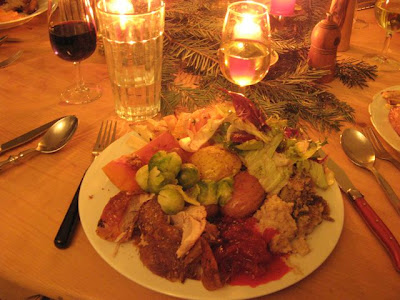 Turkey, Cranberry Sauce, Gravy, Bread Sauce,
Potatoes, Brussels Sprouts, Carrots, Parsnips,
Salad, Squash with Walnuts and Maple Syrup
For dessert, I was quite pleased that, it being one of the heaviest items bringing my suitcase above the 23.9 kg limit, I'd put the small pudding in my coat pocket, so it hadn't been lost with the rest of the luggage.

When asked what I wanted for Christmas a year ago, I said without hesitation "a large and fluffy bath towel." I didn't get it last year, but this year it came and it's amazing. So, for my next trick, I'm going to go and have a shower that will make Greenpeace cringe, then wrap myself up in it with a cup of tea.
Posted by Catherine Motuz at 12:54