January is a funny month - it usually starts hungover and takes a long time to recover. In the case of my circle of friends it at least has a few birthdays to carry it through. Helen wants to move back to England this summer so 25 of us pitched in and raised enough pounds to buy a small used car - the gift of being able to go home again after evening gigs. Here you can see a symbolic 1915 Ford model being driven out of it's garage by a sheep, carrying a bag of chocolate coins, and under the car is a red envelope with the notes. 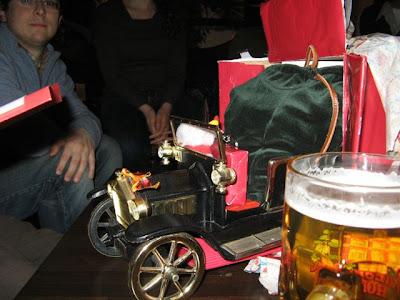 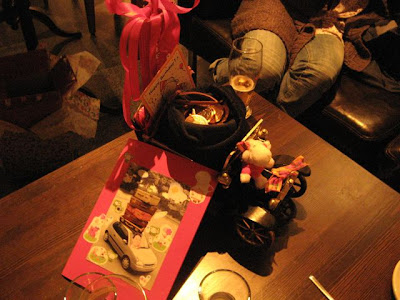 Car, dosh, card, sheep, chocolate, beer, friends
The 31st birthday of my friend and neighbour Alex was marked by some very festive Bach Cantatas, after which his daughter, the three-year old Sophia, spontaneously ran up and joined him on the stage for the bows, doing her best curtsy in her pink birthday dress. Then we all went back and ate an amazing Pavlova that David Blunden had prepared.

Another cheery item besides birthdays is that I've been pulled from the CNC lathe at the back of the Egger shop to my desk, with a view over the hills, where I get to make sheet-brass tubes all afternoon. This involves folding sheet brass around a rod and then hammering so that the seam is clean and flat, ready to be soldered. It is very Zen and quiet in itself - only the banter of the instrument makers in the background and the whistled tunes being passed about compete with the gentle tap of the hammer in just the right place (except when it's not). I hear there's lots more of this work to do so I'm trying to get good at it as fast as I can. 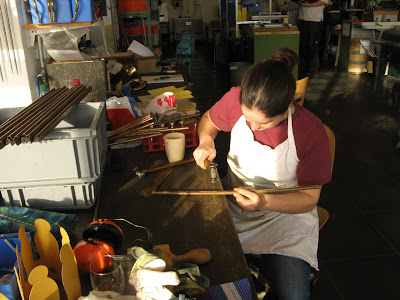 Hammering in a sunbeam 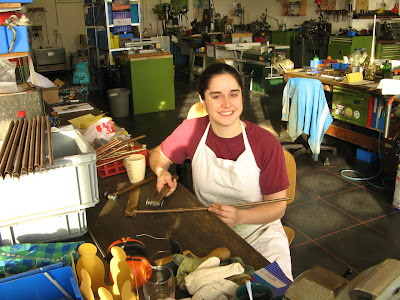 View out the window
The first week of January was relatively unproductive though: the rain meant very little exercise and grey weather makes me quite miserable. I do own a medical-grade sun lamp, but the fact that I find it quite easy to get up and start achieving on sunny days despite having no window in view from my high bed makes me think it has much less to do with light and more to do with pressure, perhaps also ions. Will investigate further. The first weekend of January was quite possibly the most unproductive I've had since last spring or so: I did almost nothing at all (almost). On Saturday, this was fine, but on Sunday I got a bit sick of the colour of the wall and took up Caroline's invitation to go out on a walk in the Allschwil Forest. 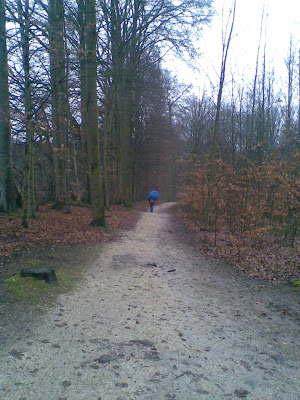 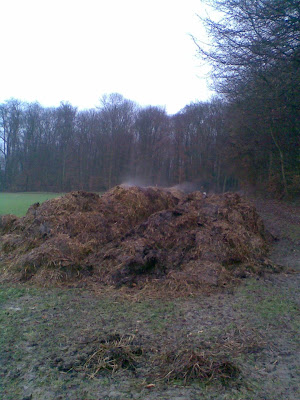 Watching Compost Compost
One thing I like about Switzerland is that farm shops are run on the honour system. Caroline and I went to a nearby shop, open on Sunday since no one was required to manage the till. We picked out some nice vegetables and apples, weighed them, put some coins in the cash box and were on our way. The only odd thing was that, for not having to pay any employees, the prices weren't any lower than in the supermarket. But everything was fresh and I suppose they have to fund the few times that people will inevitably abuse the system. I'm glad that's rare enough that the shops are still there. 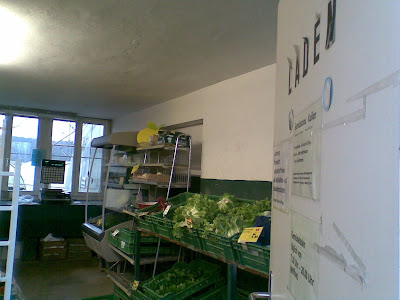 Honour System Vegetable Shop
The walk proved once again that, indeed, the only sure way to beat winter blues is exercise - it worked very well. The next week it started to cool off again and stop raining and I started skating again too. And practising. And finished my taxes, wrote an abstract for the upcoming MedRen conference, and started organizing my Glasgow University application. That's better. I've been skating regularly now, with the hopes of keeping up the achievement levels.

Skating is quite amazing - I can't believe I let so many years go by without going. The rinks here are a bit soft and chip easily because of the warm temperatures, but at the right times of day I can get a good surface of ice to myself. My first time on the ice, I was surprised at how wobbly and unbalanced I felt - I thought it would be more like riding a bike but it's not. Inspired by some of the more serious figure skaters on the ice, I started practising throwing my weight around though, finding my balance slowly. What's very encouraging is that I seem to have transferred some of this feeling of using my whole body into playing the trombone, which feels like an excellent way forwards after having lost that feeling a bit last summer playing little sound bites at the Globe.

Last weekend I played with a slightly smaller I Fedeli quartet, including some pieces with saxophone and percussion. The modern music on the programme was pretty good (if sometimes a bit conservative for my tastes), and we also got to play some Senfl that I'd never heard before - what an underrated composer!

There have been also many social occasions since the birthday extravaganzas - having all guest rooms being filled in the house has been lovely if slightly exhausting. Basel also had a festival day - Vogel Gryff: As always I missed the mid-day boat ritual, presided over this year by the Wilde Mann, but I did run across him on Clarastrasse while walking home from the trumpet class recital that night: 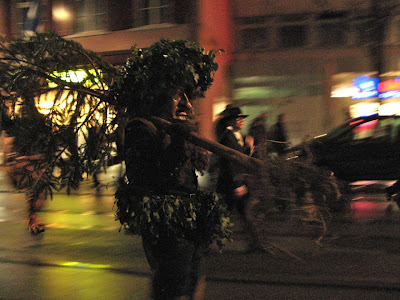 Wilde Mann
There were also some pipe (in this case piccolo) and drum bands out - the carnival kind but in this case very good and very together. 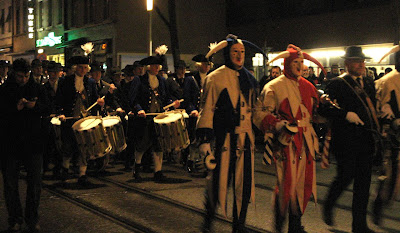 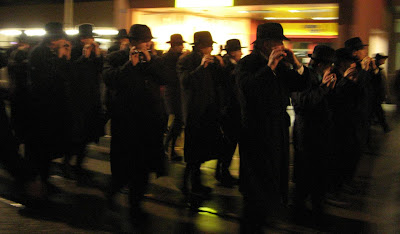 Pipers
Today I've taken the day off work - coming down with something and trying to nip it in the bud by drinking more water, tea and juice than is really comfortable - on my 3rd litre now and it's only noon. If I don't get any worse, I will haul myself of to the Schola in time to hear a talk on 17th-c proportions - the issue of how quickly to take threes comes up in far too many rehearsals to consider missing out on a well-read explanation.

I just discovered that blogger is also keeping track of who has visited this page, so the missing counter is not such a tragedy after all. It's counting hits, not visits, though, so it just passed the 3000 mark - yey! The most traffic from referrals comes from here - thanks!, with the second from, um, here?
Posted by Catherine Motuz at 12:00