Back in the Princes St. Backpackers Hostel in Edinburgh, where I so far have room N all to myself. It's two floors above room S, where Helen and I stayed in January, so hopefully the raucous of the club below won't bother too much.

It's been another exhausting week, this time in Aberdeen attending a conference on musicians' networks around 1600. Lots of Philips and Sweelinck, stories of Catholic spy networks and of how music traveled swiftly all about Europe hundreds of years before the Internet. Besides the talks and concerts, there's been a lot of socializing too, and keeping in shape on trombone enough that Monday's Saul rehearsal doesn't hit too hard. Will be nice to get back to playing again...

I haven't had a performance-free week, though: I got roped into singing the top part of a famous piece by Caccini, Amarilli mia bella, substituting for a student soprano who had fallen ill. I thought it would be a simple matter of reading it, polishing it a bit, and performing it... By the third rehearsal, having also led the second and half of the third, I asked for some my conference fee back. It would have been a huge amount of time to still have to pay when I missed some talks and other events because of it. And then there was a fourth rehearsal too (at which point still some singers couldn't sing their parts (!)), so I felt quite justified.

This morning's talks had a quite nice atmosphere, being conducted in King's College Chapel: 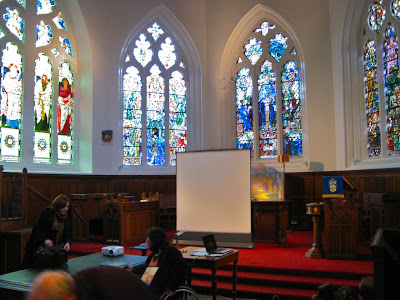 Outside, a statue of a Lion and a Unicorn at the entrance to the University reminded me vividly of a dream I had recently about trying to decide where to live. There was a Lion in search of a Unicorn and it found Frank Zappa instead. 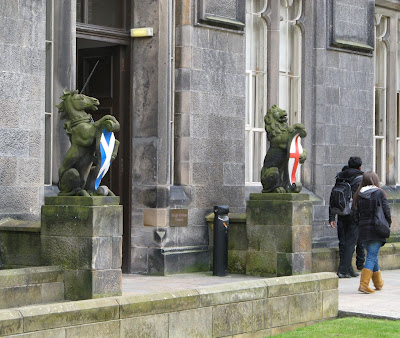 There was also this coat of arms stuck to the side of the chapel. Both unicorns look quite sad compared to the one above, but the one on the right looks absolutely pathetic. 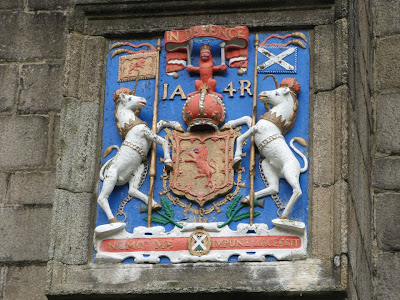 So, um, what's the bent horn about?
Today I began to feel melancholic about leaving Scotland, but
just as I was settling into a wistful mood, Caroline and Ralph whisked me away to the beaches of Balmedie, where Frauke, Helen and I visited the Dunes but a month ago. 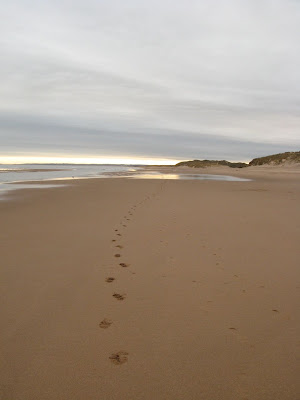 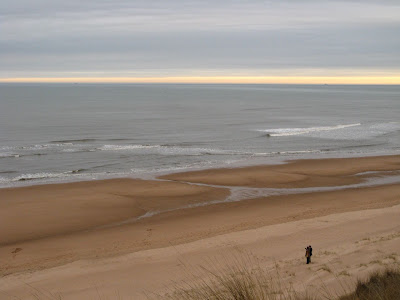 Caroline and Ralph looking out to sea 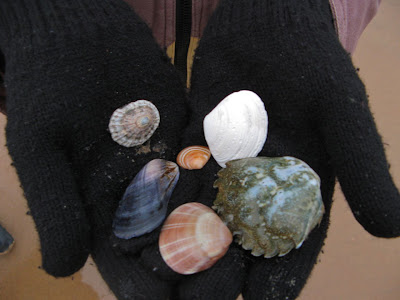 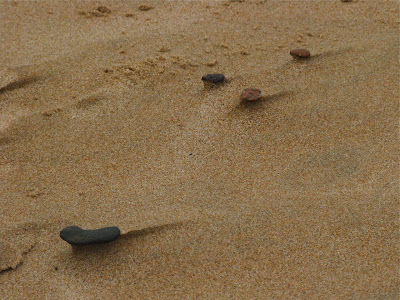 Now, the sea isn't a very good cure for melancholy (no, no, no) but as we were driving back, I saw a fish & chips shop: "Stop the car!" It did hit the spot, but was also a reminder that they do soul food very well here. And music. And hospitality. And barley products. And it's lovely to be so close to nature. And their history is very rich. Anyway. Not getting up at 6 tomorrow to get a flight back home is very tempting at the moment - I'd better get to bed to give myself half a chance.
Posted by Catherine Motuz at 23:25