I've taken a bit of a break from blog writing, but with half an hour before going to sit by the Rhine and soak up the last of this week's glorious spring sun, I'll try to write as much as I can about this extremely busy time. Suddenly, after a relatively quiet winter, March has been abuzz with concerts. To avoid waiting around inordinately for the train to get to and from Saul two weeks ago, I rented a car, which meant that on Saturday morning Caroline and I could hop in and disappear into the heart of the Black Forest, where no trains go, and do a little hike.

I remembered from a drive into Todmoos a stretch of road with a rushing stream and cliffsides, so we headed there. At a very old bridge (and traces of an old road into the forest, there was a car park and trailhead - typical Black Forest convenience. 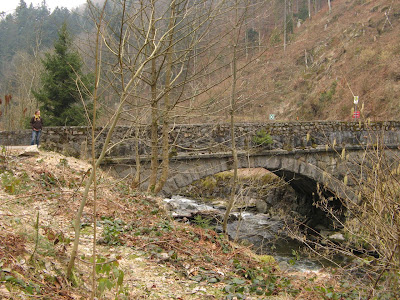 Caroline at the Old Bridge

In this picture it looks rather wintry still, but the moss and the rushing stream made the air extraordinarily fresh and sweet, and reminded me of my mid-May walks in the Adirondack mountains of New York State. 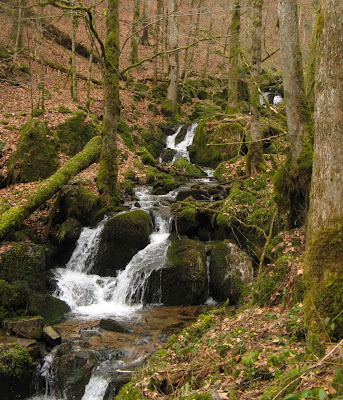 Rushing stream and moss
Unfortunately, we missed the turnoff for the great big view that we'd headed up to see and wound up at a crossroads instead. Just about to head back, we wandered over to the edge of the woodland intersection and peered over. They do seem awefully close, but with all that snow those can't really be anything but Alps... 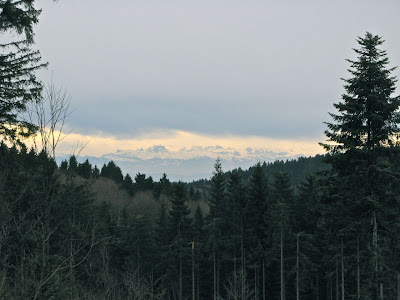 I was supposed to head to Bordeaux on the Basel Bordeaux flight on the Sunday and take the train to Toulouse from there, but Saul's late arrival into my diary meant changing it to a Monday flight from Geneva - overall a more complicated way of traveling but Toulouse is one of those places that's just not easy to get to. Being there on Sunday night meant that I was around for Morgenstraich, the opening event of Fasnacht (Swiss Carnival).

Oddly enough, in Basel we celebrate Carnival a week into Lent rather than before it. Why? To piss off the pope, of course. I'm not a huge fan of the whole event - parades of hideously loud and out of tune trombone bands well into the night, confetti everywhere, oranges being thrown at your head, and the stench of too much drunkenness. BUT...I do like Morgenstraich, which happens before any of the rest.

Before, in this case, means 4 am. At 3:42 I arose from my bed and wandered over to Claraplatz where the revelers were gathering. They'd already lit their laterns by the time I got there, and were getting into position, adjusting masks, and generally getting very excited. 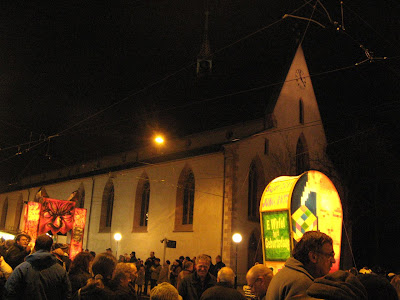 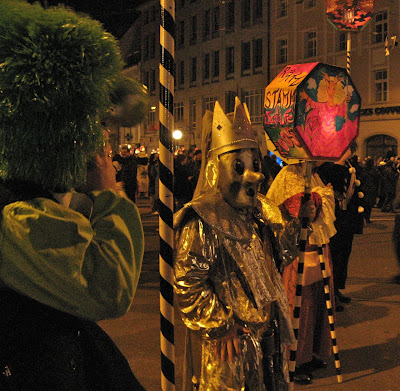 excitement at 3:58
At precisely 4:00, the bells of the Clarakirche started to ring and all the lights went out, leaving the whole square dark except for the lanterns. Interrupting the fourth stroke of the bell, the piccolo bands began, each of the four or five around me showing off their best tune, and then seconds later the drums started their slow, piercing strokes. I made a little recording on my camera, but I've not posted it because what got my heart unexpectedly racing was not the aural, but the visceral sound of it all. When the other watchers stepped into the street to follow a band down an old 14th-century, I found myself carried along too, until I broke out of it and headed back home. I was back in bed by 4:12. An excellent half hour. 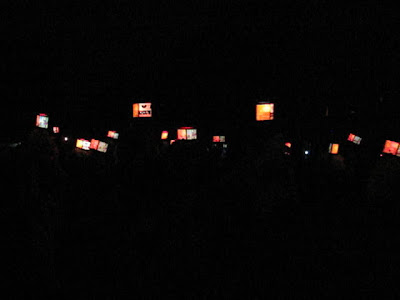 Lantern light
The next day, after a drive to Geneva, I flew to Bordeaux, which is a nice place but not as pretty as I thought it would be. I was pleased, though, that at 10:30 pm I managed to satisfy my sudden craving for Steak & Frites. The next morning I wandered around, and as I approached the city centre, I realized that I'd been rather unfair in comparing European and Canadian cities, tending to compare the old parts of the former with the billboard-laden suburbs of the latter. Bordeaux suburbs were also not very nice, but the inner city was not any prettier than Montreal, Quebec, or even parts of Ottawa. So there.

Bordeaux
Toulouse was great fun, and after I got over the fact that it was great fun and calmed down enough to realize how spectacularly beautiful the music was, it was even better. You can call me up to play Monteverdi with Concerto Palatino and Cantus Cölln any day.

There was no time for tourism of course, but we did have an excellent lunch in one of the little restaurants above the market in the centre. From our window we could see this shop: 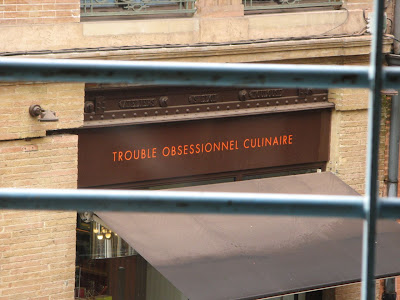 I was supposed to have the next weekend off, but due to the illness of a colleague, I wound up heading to Fribourg (home of Vacherin Fondue) to play Schütz all weekend with Les Cornets Noirs. It was my first time playing with them and I was rather nervous until I realized that if I let myself enjoy every phrase I wasn't nervous anymore and played much better. This is around the 85th time I've had this epiphany in the course of a concert - why don't I remember? The odd thing is that even the very sad bit I felt joy in making as heart-wrenching as possible.

On the other hand, one of the many insightful things I've heard this week watching Youtube interviews of Stephen Fry (a natural extension of becoming slightly addicted to QI), is that some people actually believe that humans can't feel two emotions at the same time, which is daft. Stephen Fry has become a spokesperson for manic depression, very eloquently explaining in the course of various interviews and one documentary how it manifests itself, telling his own story as well as those of other people and giving insight into the state of medical research in tackling it.

It's all seemed a bit a propos this week, which is an understated way of saying that the coming of a gorgeous sunny spring full of flowers and blossoms, while lovely, has made my head go a bit haywire. How lucky I am, then, to have a live recording of a Concerto Caledonia concert in December called 'Revenge of the Folksingers'. It's a disarmingly simple-sounding collection of songs old and new which had the effect to make my life seem suddenly not so complicated. Ah... It will work for you too, I promise. You might have to wait 'til June though to buy the album, or if you're really lucky, they're doing the concert again here.

Half an hour has passed, and some friends are waiting for me by the Rhine to watch the sunset. 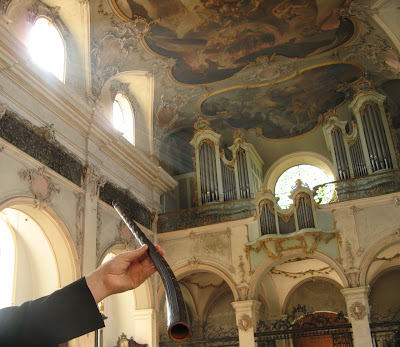