Happy May Day everyone!

I have big news: remember November's hair-tearing, neuron dampening, grant-writing saga? Well, a letter from the SSHRC arrived yesterday, a thin little envelope which aroused feelings of trepidation and pre-dismay. I opened it and....they've decided to award me a grant! It's a class B grant - so the pressure is off to mount a baroque opera with the windfall - but means that I don't have to worry about paying my rent for the next four years and that I can plan to take a proper vacations in the summers, both of which will give me many a sound night's sleep. Yipeee!

Previous to finding all this out, I've been a bit of a stressbag this week, so I've done two things to help: Unable to bear the idea of not knowing where I was going to live in Montreal, I got very impatient and bought a flight for the last week of May, where I hope I can find a place for July 1st. Then when I come back mid-summer I can do some nesting... I've also been doing what I ought to have started doing ages ago and have been getting some exercise. As it's mostly descriptions of cardiovascular jaunts which seem to be making it onto my blog, I wouldn't want you to get the idea that this is all I do: I've also put in hours at the Egger workshop this week, paid bills, canceled subscriptions for the move, written and read emails, tidied, cooked, found someone to take over my lease, booked travel for work, practised, and done some article/book/etc. reading for upcoming projects, both audio and academic. It's just that none of them have stories worth telling attached - or not yet anyway.

On Tuesday my neighbour, Alex, rounded up a few friends and we headed off to a Straussi - a restaurant serving only local produce which is only allowed to open during harvesting seasons. This time of year the menu is dedicated mainly to asparagus - something they take very seriously here. The asparagus in question is the posh, white stuff that you get from covering the shoots in soil the moment they show so that they never get the chance to turn green. More expensive and not as tasty, but enjoyable to consume anyway. A bike ride was required to get there and back: Alex leading us through Lange Erlen 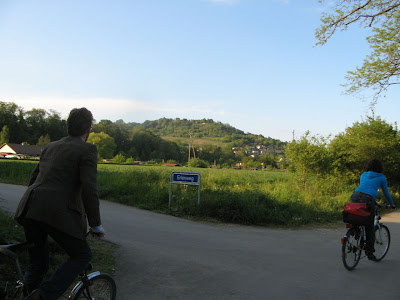 The Tüllinger hill - on which the restaurant sits 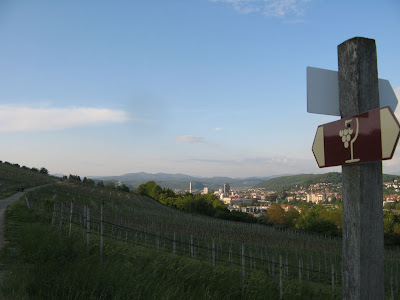 View from vinyards near the top 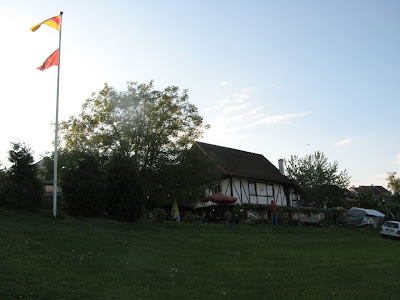 The Straussi
After a few days of admin, I couldn't bear the idea of sitting in front of my computer for the sunniest hours of the day again yesterday, so after meeting Alex to deliver a few forgotten items to his train (which was only stopping for 3 minutes in Basel), I loaded my bike onto another train and headed north into the Black Forest.

While the Black Forest does have thick patches of impenetrable woods, its rolling hills are also covered in meadows and farms. This time of year they're spectacularly covered with little yellow, white, pink and purple flowers. Soon the poppies will be out too... 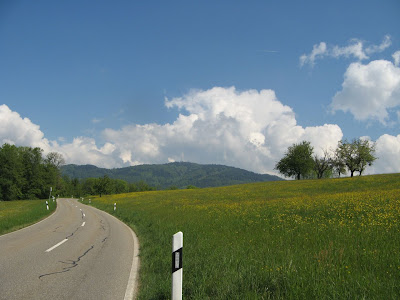 It was without much hesitation that I only brought a 500 mL bottle of water with me - in my experience, it's quite difficult to get far enough away from civilization for lack of supplies to be a problem, and indeed just as I was on my last sip I ran across this: 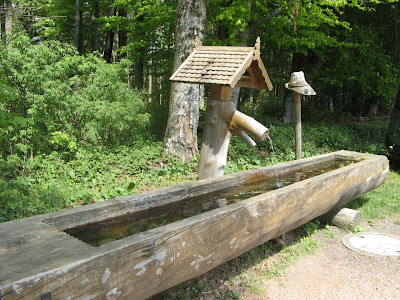 The bike ride was not as long as I'd hoped - after a long climb up and cycle around the top of a lush valley, I hit my 1000m mark goal (starting from 394m elevation) and it started to rain. I took shelter in a, well, wooden shelter (how convenient, yey Germany), but then as I set off again it began to pour. I had chosen a steep path to go down too, which my map had said was paved but it obviously hadn't been repaved since long before the map was published in 1999 and was so crumbled that going down on a racing bike was quite tricky. By the time I got to the bottom of the big hill, I was covered in mud and my socks were completely soaked through. I almost kept going along my intended route when I realised I was only going to become miserable, so instead I coasted down to the bottom of the valley to the train in Zell, arriving conveniently a few minutes before it's half-hourly departure. In another half hour I was back in Basel, opening my post with no small delight and getting ready for a hot shower. Not a bad day at all. 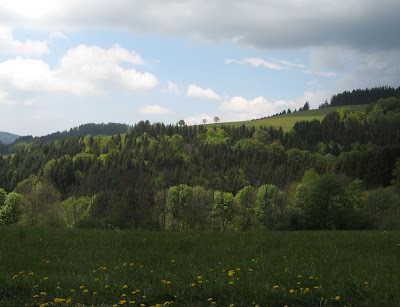