It's been a week of getting enough of Europe - an important step in getting ready to move back to Canada, I think. On Monday at the request of a friend giving a talk on Orlando di Lasso in Canada later this month, I hopped on a train and spent a night in Munich to take some pictures. I visited the Residenz and the Stadtsmuseum, imbibed at a beer garden, perused the Viktualenmarkt and otherwise "did Munich" as you might expect a tourist with a Eurail pass to "do". I was somewhat relieved at how much it felt like other German cities - maybe it really is time to go and see what Canada feels like again. 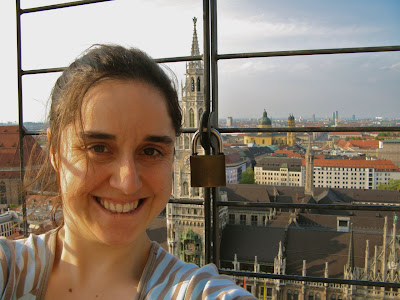 Up the tower of the Peterskirche,
looking at the New Town Hall 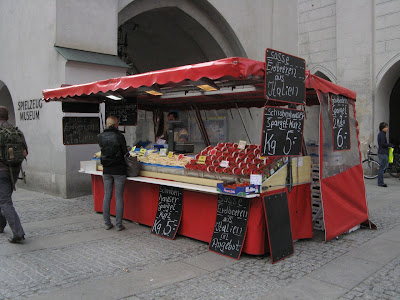 Strawberries and Asparagus are in season

I always used to assume that just because something was cobblestone, it must be very old indeed. My Dad is here visiting this week, and commented on the ancient cobblestone lining the streets of Basel. So I had to take a picture of the construction of this driveway in Munich: 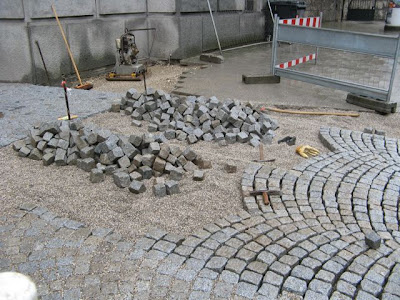 Treading the line between amusing and depressing is this statue of Orlando di Lasso. At first I thought Lasso was more recognized and loved than I'd suspected, now I realize that, unfortunately for him, his bronze happened to be right across the street from the hotel where Michael Jackson stayed whilst in Munich... 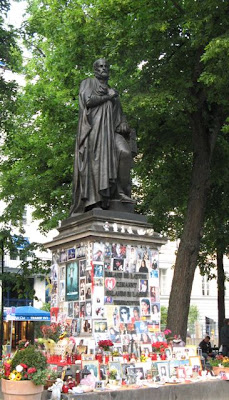 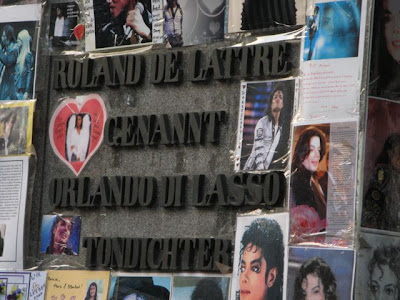 Or not. Ahem.
Speaking of statues, this one is also slightly depressing - now I understand why one puts people on pedestals - she's easily reachable: 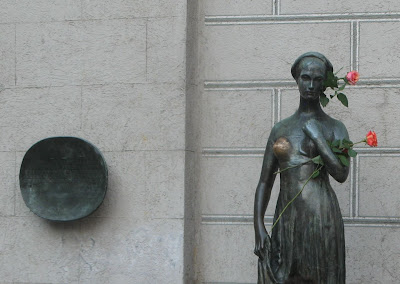 Another thing that's given me enough of Europe... After Canada elected a right-wing majority government with less than 40% of the vote, I saw some hope in that at least the UK seemed ready to consider electoral reform which would get rid of First Past the Post and make it impossible for an MP to be elected without at least 50% of people voting for them in some way. This they proposed to do by introducing something called the Alternative Vote (AV): a multiple round system of counting votes (but efficiently only one trip to the polls for voters) so that people's second choice is also considered if the party they voted for places third, fourth, fifth and so on. Opinions have been strong: this was one of the few times that I've seen Facebook used as a forum for intelligent political debate, but I was dismayed to see how many people voted no because they saw AV either as not the best possible system that could be proposed (not enough like proportional representation for some) or because they embraced the army of straw men deployed at them by the No campaigners. Unfortunately for the former especially, I think this referendum will be boiled down by politicians to mean Yes or No: "start the wheels of change or let them rust," and alas, rusting won. After all, the status quo is obviously to the advantage of all those MPs elected by the minority (or perhaps in half-accurate political lingo "the elite" - but the Yes side wasn't PR savvy enough to use that word, alas).

Speaking of PR, I've not linked to David McGuinness's blog in a while, but today I can highly recommend a visit to read up on why musicians should stand up to people who want them to play for less than a proper fee on the theory that it's good for PR.

And speaking of not playing for a proper fee, I finally got word from the gig I'd told off for paying too little that they've replaced me with someone who would play for less - very good of them to tell me themselves at last. Smugly, I've found out that the other gig I've accepted for the same period, with two days' work instead of five, pays only 50 francs less. So there.

There was a moment when I'd questioned the wisdom of talking myself out of a concert this month though, but then the phone rang and I was offered two days of teaching 10-12 year old boys at the Musik-Akademie. I found myself divided while teaching: on the one hand it seemed unfair to ask for musicality when the kids were just at the very beginning of getting around the instrument; on the other hand, music teaching which says that you shouldn't begin to think musically until you've mastered all the right notes in the right order is to blame for such boring grown-up musicians as I've run across in my time. So I made the kids explore different articulations, notions of rhythm and ideas of phrasing, and play a fair bit without notes to read in front of them and we all had a great time.

My Dad and Jane are here visiting this week and next - how lucky for us that our jaunt up to St. Chrishona happened to be right when the cows were out on the hillside feeding and when an alphorn player - quite a good one - was getting some practice in. When we wandered off into the forest it was his continued playing that led us back to the bus stop. 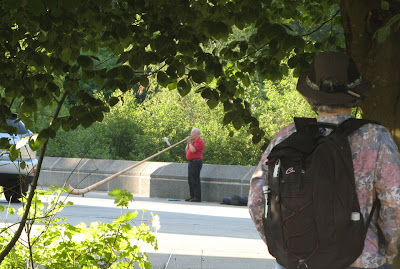 Today we headed off to the Tinguely Museum - he's known for his moving sculptures. Many of his, like this fountain, were very playful, while others had a morbid streak to them. 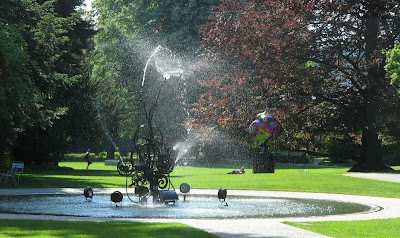 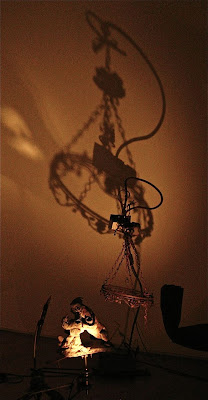 This is the setup of one of the orchestras for performances of Mauricio Kagel's "Two-Man-Orchestra" piece, setup in the lobby and being performed a few times a week: 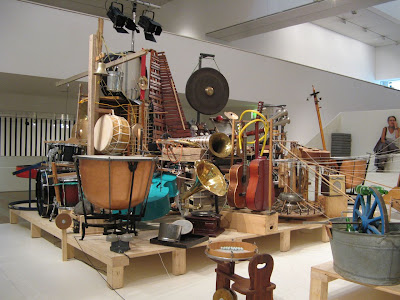 I think I would have to be in a very patient mood to listen to two men explore all the sound possibilities of this setup (and the other similar one) over the course of 71 minutes. I'm sure it would be quite good for me.

Posted by Catherine Motuz at 21:54