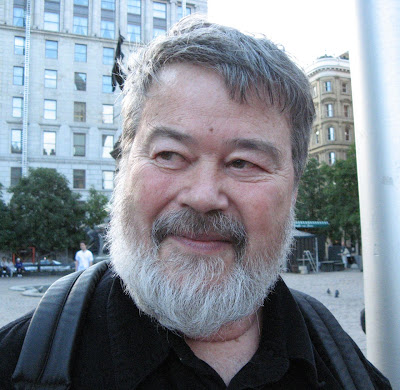 This post is in memory of Bruce Haynes, a friend and mentor who died on May 17th here in Montreal.

I wrote most of this a week ago, but decided to wait until I was in Montreal again before posting it. Part of me wanted to communicate right away, and part of me felt that I should, but I was reminded of old emails apologizing to Bruce for tardiness in getting back to him with my side of various conversations about music, and I treasure a reply from him saying it's ok: "I've made damn sure I
won't myself feel hurried in writing this..."

So I've taken my time, and in a way the act of taking extra time and care seems like a better tribute than the writing of any clunky words that I could come up with. Since a first attempt at writing, a page has been created on Facebook where people have posted all sorts of lovely remembrances, showing facets of Bruce which are delightfully new to me. He had almost completely stopped playing the oboe by the time I started to get to know him, so to hear of stories of him as a performer is dear indeed. It's good to know that my desire to set down my own stories isn't an isolated thing, but fits into a kind of community of people from all over the world who are eager to remember.

I recently re-read an email that I wrote in 2008, describing sitting in Susie and Bruce's kitchen. I think it's safe to say that it's my favourite room in the world. It's beautiful for one, with a great wooden counter, shelves covered with motley teacups, and a pinboard full of family photos (is it made of wine corks?). As if to nourish the creativity and the exchange of ideas that it has always hosted, there always seems to be a freshly baked creation of Susie's to munch on. In fact, the first time I went to visit during my trip to Canada last autumn, I called from the rain after a rehearsal and Bruce and Susie picked up at the same time - as soon as I'd said hello, Susie put down the phone and there were tasty gingerbread creations just being pulled from the oven by the time Gawain and I arrived. This kitchen is a vortex for early music: festivals, concerts, recordings and books get planned, and many people meet there for the first time; others get to know each other. As I write, the memories of conversations with Bruce come back - authenticity in performance (Bruce introduced me to the ideas of Diderot on whether sincerity is required in acting), and disagreements about subtlety versus the exaggeration of gestures in recordings (there's a stereo under the shelf with the sugar to help us illustrate our points). One day during the germination of The End of Early Music, we disagreed about whether modern musicians should write in period style. We were both vehement and it lasted for seven delightful hours. We had to order a pizza and open a bottle of wine and no, even then we never quite agreed, but it was a delicious disagreement. Sometimes we also talked about non-musical things: Bruce showed me that one can judge a good potter by their ability to craft a spout that doesn't drip, for instance, and just last autumn we bemoaned together that someone had respectably cleaned the many dried and twisted strands of spaghetti off the walls of the kitchen where they had been thrown many times over the years to be tested for doneness - if it sticks, it's done.

My second favourite room in the world is probably Bruce's office. It's right above Susie's music room, where I heard Ste-Colombe performed for the first time, where we rehearsed much of Orfeo in 2007, where I evesdropped on David Greenberg, David McGuinness and others in the middle of creating the CD La Mer Jolie while I worked quietly in the corner in 2004. So as you can perhaps imagine, Bruce's office just above is a vast space - very warm, but vast enough that there's space to pace and move about, and room to step back a bit from even very complicated ideas. We talked about Vicentino last I was there, and about the affects of Bach Cantata movements. Bruce had gone through each cantata and assigned to each movement what he thought the affect was, refining his own list of affects in baroque music in the process. We talked about timing in music, too, and listened in fascination to a recording of romantic violinists playing Bach with no pause for breath whatsoever.

Last week I wrote a paragraph about how how Bruce, in the course of all these talks about music, communicated an open, welcoming and humble (or humbling) outlook: a willingness to take the time to listen to others, but also the discipline to take time to dedicate to his work despite everything going on around him (which was sometimes a lot), and an understanding of how crucial it was for himself to give his love of learning warm, vast and well-nurtured spaces to grow in. Being around all this changed me as a person and I very much hope that his memory will continue to do so. But while writing it is one thing, I cheeringly just realized this second that in the apartment for which I signed a lease here in Montreal on Thursday, the kitchen and the office are the biggest and most welcoming spaces.

Another thing about Bruce that I'll treasure is his passion for questions. I remember when I was 17 and my boyfriend was 19 and had gone off to college, he told me when he came back that he had grown up somewhat and found me much younger than he had before. I asked him how things change when you become a proper adult, and he replied that you ask fewer questions. Ah. Our relationship didn't last much longer after that, needless to say, but still, a part of me always wondered if actually I wasn't really growing up properly, since I was still always full of questions. In Bruce I suppose I found a kind of co-conspirator in refusing to give up this youthful trait, and yet as someone far more centered and settled than I was, he was also proof that actually a love of questions over answers (c.f. The End of Early Music) has nothing to do with how grownup you are. Nor does optimism for that matter. And so I was pleased when I learned the two stories of him that came back from the hospital: that the last words of his peaceful departure, surrounded by Susie and his children, were the half-sentence: "I am questioning...", and that and after his second open-heart surgery asked for a desk and a chair to be brought to his hospital so that he could keep going on his latest writing. Thanks, Susie, for this news.

I remember the last time I spoke with him, too. I had already visited him a couple of times when I was in Montreal last, but having to leave a viol for someone in a safe place, I arranged to leave it with Bruce so that I could drop by one more time. We had tea - and cakes of course - and talked for an hour or so, about music but also about life and the new directions mine would take with starting my Ph.D. I was wary that I had felt compelled to go that day, and not knowing when I would be back again, took care to say a proper goodbye when I left.

Yesterday I registered for MedRen 2011, where I'll present my first academic paper in a month's time. I admit that I've been dreading that perhaps a part of me that I don't much like will rise defensively to the surface when people start to ask me to come up with answers to their questions after my talk. This morning, in the midst remembering Bruce, I can't help but be reminded that I can choose whether this moment should feel like the test of my ignorance that I dreaded just last night or if it could be something else. I think in the same circumstance, just like when he was invited to talk about his book in Basel, Bruce would have looked forward to other people's questions more than to talking himself; he would have loved each opportunity to hear of ideas he hadn't thought up on his own and delighted in other people's perspectives. And of course that's the way it should be. Thank you, Bruce, for giving me the chance to get to know you enough to realize this. I look forward to the many such challenges his memory will put before me in the coming years. I'm going to miss him a lot.
Posted by Catherine Motuz at 23:31