This past weekend's Mozart Requiems both went fairly well. I'm finally buying my own classical tenor trombone and the Tuba Mirum solo is a challenging way to get used to a brand new instrument. Specifically, the slide wasn't broken in yet, and while sometimes it was just fine, other times it was reluctant to slide without undue pushing and pulling. I brought it back to the shop for some TLC after the conductor stopped twice and told me to play more flowingly in the first rehearsal - though admittedly this is also because he wanted to take the solo a bit faster than I did.

On Saturday I had the solo in the back of my mind and heebeejeebees about it all day. Mozart put it in a kind place, though: the trombones are playing constantly and don't get a moment to stop and think from the beginning of the Introit until the fateful first notes of the Tuba Mirum, where we're all quite warmed up (if a bit tired). Playing on a new instrument with no spit-valve, getting the outer slide back on with my shaky hands after emptying the water out already gave me a feeling of triumph going into the solo, and it went well.

The second day I hadn't slept well at all and didn't have the energy for the same adrenaline-fueled brand of heebeejeebees, but tiredness dulls my resistance to negative self-talk, so that was the challenge instead. I dismissed some bits of it as amusing and other bits as just irrelevant, especially when I had the thought that I didn't deserve to nail the solo - not useful, thanks. When the solo came around, I was far more nervous than on Saturday though and decided just to focus on playing musically - always a good solution - but of course I forgot to follow the conductor's faster tempo - oops. He wound up having to follow me a bit more instead. Not a big problem, actually, and I enjoyed my appoggiaturas more. Interestingly enough, more than one person told me they liked it better this second night.

Here's our section after some BRS at Schmale Wurf (which we finally found out means "Runt of the Litter"): 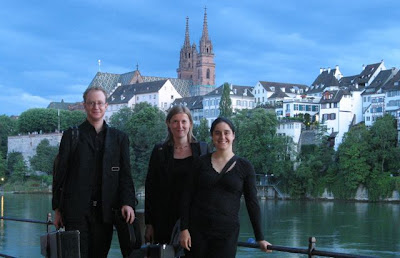 Keal, Claire, Catherine
Now I'm in Heidelberg, playing Josquin and Dufay on a programme with Klangforum, who specialize in contemporary music and I'm quite looking forward to hearing the rest of the programme. The last time I willingly listened to Xenakis was almost ten years ago on the day of 9-11, when it seemed to fit the events of the day better than something melodious.

I was a bit dismayed to hear that we were being put up privately and not in a hotel. Sometimes it's quite lovely to get to know the locals but sometimes I'm just not in the mood to give an explanation of historical trombones and especially not of the economics of being a freelance musician, in German, over supper. So I was delighted that this "privat Unterkunft" is actually its own little studio flat. It has a little kitchen, which is great not just because it saves money, but because my efforts yesterday in a restaurant not to eat any raw produce was thwarted by chopped chives all over my risotto. Normally chives are a good thing, yes, but we're only a few hours from the e. coli epicentre. Frozen spinach for me this time 'round, please. The other nice thing about this flat is it's up on the mountain by the castle; this is the view from the table where I'm writing: 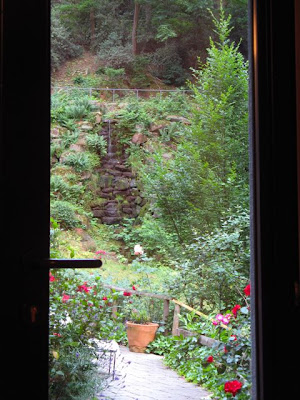 Yesterday's rehearsal was very interesting indeed. In both pieces the conductor wants us to play quite quietly and disappear into the voices, which a simplistic part of me finds odd given how much we cost. The Dufay, from 1431, is a military piece, and he wants us to play very gently and wholesomely. So we do, but I'm making a mental note to programme it for a concert sometime so that I can get my fill of playing it loud. But the most interesting part of yesterday's rehearsal was the tuning. There's not much to play, only a few notes which repeat themselves, but the conductor was quite adamant that the tuning of the Ab I played was "wrong". I think a few years ago I would have been quite self-concious about this, but in this case I found myself fascinated that a modern musician doesn't see the tuning of an Ab as a subjective thing. At first I'd played basically a mean-tone Ab (a bit early for it yes, but he wanted pure thirds). No, too high. Well, having transposed the piece it is actually a written Bb, so I played it a bit lower. Still too high. Well, he wants pure fifths too, so I played a pythagorean Ab. Too low now, he said, and banged out an Ab on the electric keyboard in front of him. Oh, THAT Ab! Now why didn't you just say? He wasn't unpleasant about it though.

Before today's rehearsal Tina and I spent half an hour installing equally-tempered notes onto our instruments. We were unaccosted after this; the rehearsal was spent singing and playing the whole piece quite slowly so that the sopranos could write in which notes to sing more or less equally-tempered, which to lower by 14 cents (for pure major thirds) and which to raise by 16 cents (for pure minor thirds). Because that's how you have to do it when the basses are in equal temperament.

Orchestras do this, and it becomes necessary when you want enharmonic equivalency (i.e. where Ab and G# are the same pitch, which starts end of the 17th-century but doesn't really get going 'til Mozart or so). But for Dufay I would have either played pythagorean and accepted dissonant thirds, or if I wanted to be completely in tune, then mean-tone with corrected fifths and minor thirds - but you never have to correct 14 or 16 cents, only 5.5 max. I need to write a pamphlet about this, I think.

My walk on the Philosophen Weg and right up to the top of the Heiligenberg yesterday resulted in much pondering and also sore feet. More about the pondering later. In the meantime, it was awfully pretty: 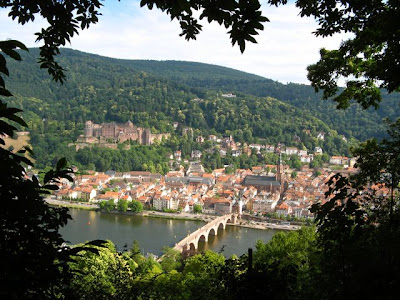 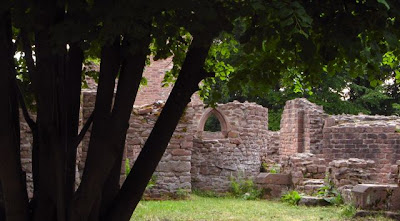 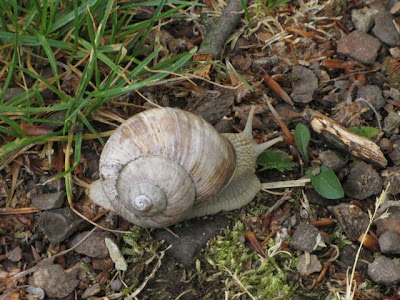