Lots of catching up to do.

I left off writing a few weeks ago in the middle of the visit of my Dad and Jane. Shortly after my last post, it was Mother's Day, Dad and I, all the moms in the building (Dorothea, Alex's mum Steph, and Jane), along with little Rebecca and Sophia, headed into depths of the Black Forest, to the Belchen, which is the second-highest mountain but with the most spectacular views. I'd been there with my mom once a few years before and while we could see out in one direction, the other was a great swathe of mysterious cloud. Time to go back.

The public transit system is phenomenal: we rode the train to the end of the line in Zell, then after 7 minutes the bus to just off the beaten track, then after 11 minutes another bus right to the cable-car station and a cable car to the restaurant near the top for Mother's day lunch. This time the walk around and up onto the summit was crystal clear.

Cable Car Ride to the Top 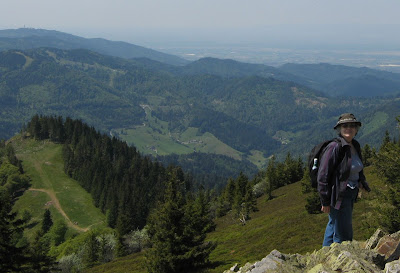 Jane, Black Forest and France in the distance
The next day we headed to a mountain not actually very much higher, but stunningly spectacular as it's bordered by the Lake of Lucerne and the Alps. In fact, the Rigi was known for its spectacular views in the 19th century, enough that when Queen Victoria came to visit Switzerland, she was carried up on a chair by four burly men. Again, this visit was prompted by a failed earlier one, when I took Dad to see the Alps with a day trip to Luzern in 2005 and the fog was so think we couldn't see a thing. We were luckier this time.

The Rigi also the site of Europe's first cog-rail, which until last year wasn't covered by a Swiss day card, but as it was now we took our day cards and took the train to Luzern, the boat to Vitznau, the cog all the way up the Rigi. 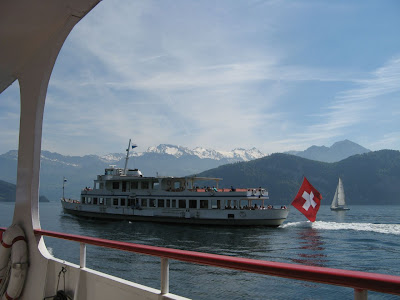 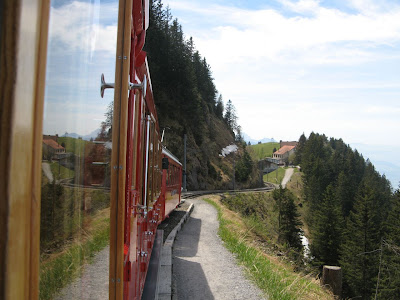 Dad and Me atop the Rigi 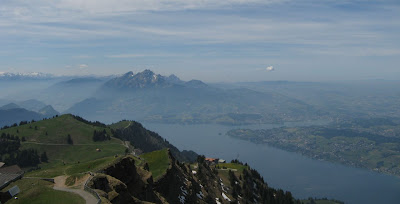 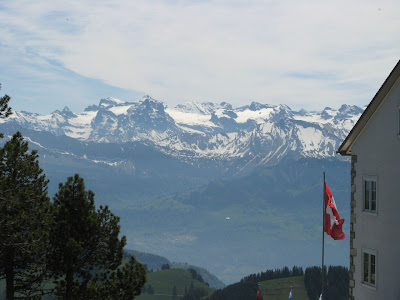 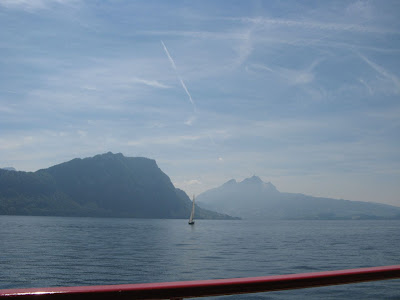 After a wander around the city walls of Luzern we headed back home exhausted.

After a few necessary days off, on Thursday we all hopped on the train and headed to Venice. After a spectacular trip through the Alps we wound up in Milan, where we ate proper pizza and headed into town with a few hours to spare. I've been to Milan a few times for work but have seen relatively little of it. We looked at a bit of the map with some green, and thinking that sitting in a park could be quite nice, headed there on the subway. When we emerged, there was not just a park but the whole Castle Sforzesco lay before us. 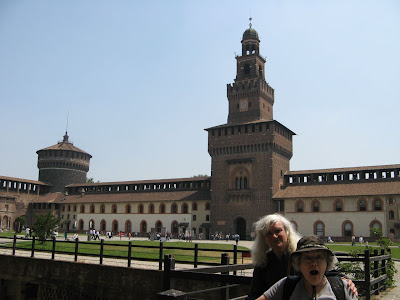 After exploring the castle, we took a short walk past some very temping gelato stands and pompous 19th-century architecture to the cathedral of Milan. The last time I was there they were cleaning it, and it was impressive to see it in its glimmering whiteness. The space inside, with its incredible and the incredible masses of stone, was awe-inspiring indeed. 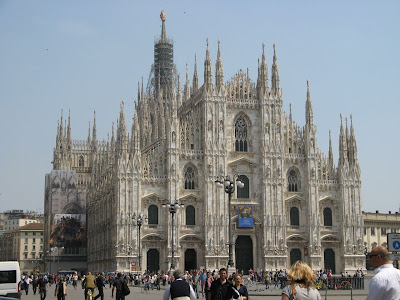 FInally after walking past a proper park with statues, grottos, fountains, and a cute brown rat, we headed of to the Most Serene Republic. 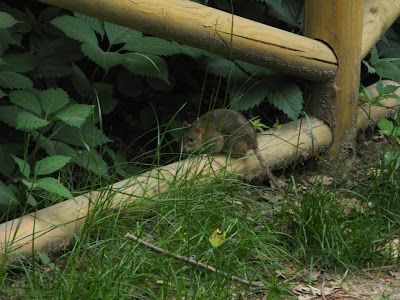 The Cute Brown Rat
From the front door of our alberghio some locals had stuck a poster outside their window reminding the rest of us of the pace of life on that pedestrian island. 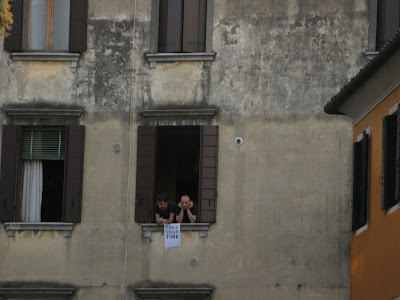 (Click to Enlarge)
The view out the back window was also a good reminder of why it's called the Most Serene Republic: 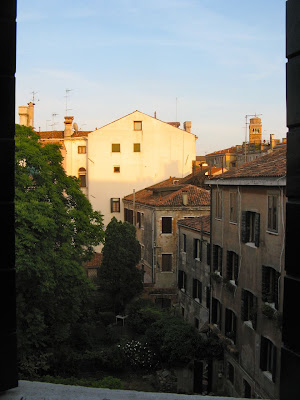 We left our bags and headed off to find supper, and my love of seafood kicked in instantly: squid cooked in it's own ink for me, please!

The next day was mostly wandering around: a most excellent activity in Venice even if one does feel like a rat in a maze at times (good times to sit in a Piazza with a macchiatone or a gelato instead, I say). Fortunately there are lots of signs to the Rialto bridge and to San Marco - the only question is which one to follow? 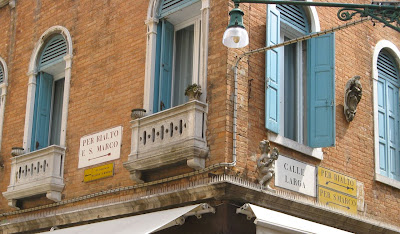 Our first stop was Santa Maria Gloriosa dei Frari, a magnificent medieval church and the burial place of Claudio Monteverdi. I found myself, looking down at his rose-strewn grave, getting unexpectedly emotional. Dear old Monteverdi! Without him, where would I be? I probably wouldn't be a professional sackbut player (would such a job even exist?), and surely wouldn't have met many of the wonderful friends I have now through playing the music of Monteverdi and the people surrounding him. Gosh.

Continuing our musical pilgrimage, we visited the Accademia del San Rocco, where Giovanni Gabrieli played the organ when he wasn't over at San Marco. 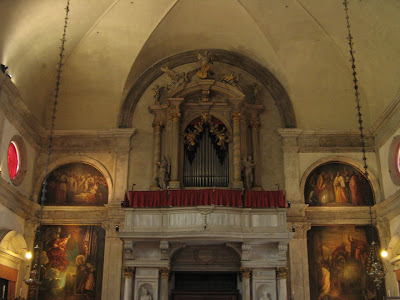 We finally started following the signs to the major tourist attractions now: 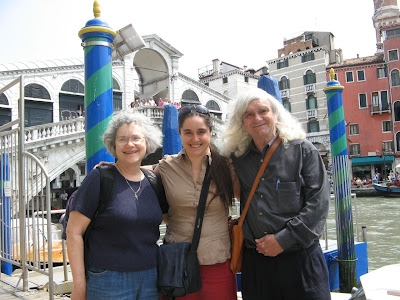 After a delicious lunch of Cicchetti - little nibbly things - we headed of to San Marco. It won't ever be ho-hum to visit San Marco, it's impossible not to get excited imagining the people who went to work there every day, and the sounds it was filled with for the first time. It's also incredibly sobering to hear what they're up to now though, since the second Vatican council. A friend of mine visited San Marco and the chapel choir was singing Kumbaya. Ow. They were singing that in Milan Cathedral the day before so I quite believe it. I didn't want to take any pictures of San Marco then - there were far too many people - but here's one of the palace balcony next door. Did trombonists ever get to play from there? 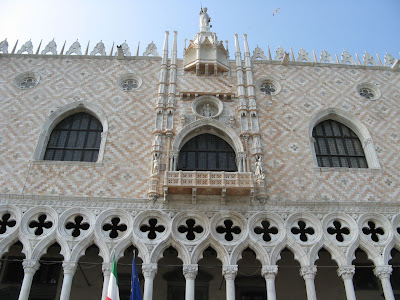 Having had enough of enclosed spaces, we took a walk by the Adriatic in the direction of the Giardini Publicci, where the tourist population thinned out refreshingly. To head back, we bought a vaporetto ticket and rode it from end to end on the Gran Canal - an excellent view of the city. 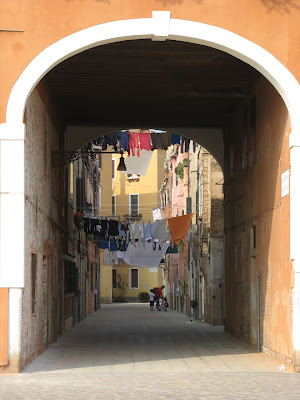 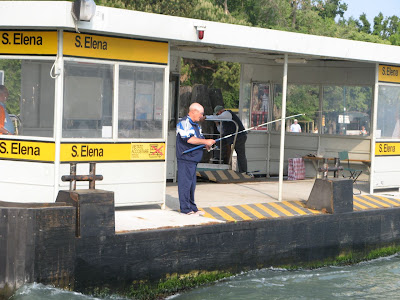 Waiting for the Bus? 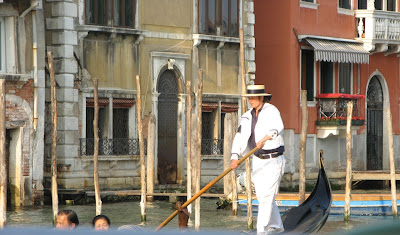 A Gondoliera
We didn't want to head back into the maze so I went to the nearest - well-camouflaged - supermarket and bought some prosciutto, melon, stuffed peppers, buffalo mozzarella, a hard cheese, some bread, and some salad and some seafood salad and we feasted in the breakfast room instead.

The next morning I woke up early in order to see Venice without the tourists and to take a good picture of San Marco. It was a completely new vibe: in stark juxtaposition to the confused, map-obscured vibe of day, everyone out in the streets and on the canals was a) on their way somewhere and b) knew how to get there. I headed back to the Piazza San Marco, which except from a few people dotting it here and there, was empty, open, and grander than ever before, the domes of San Marco angelically backlit by the rising sun. 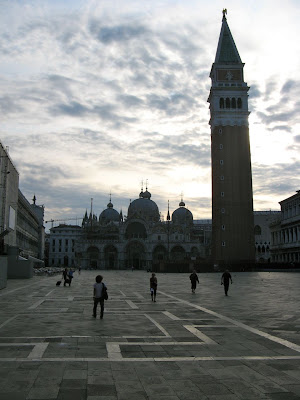 I kept wandering for a while, coming back through a district that you don't pass through just going to the Rialto and San Marco, and saw again another side of Venice. I also visited the grave of Giovanni Gabrieli, and paid my respects. 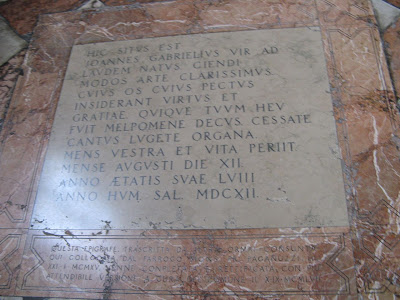 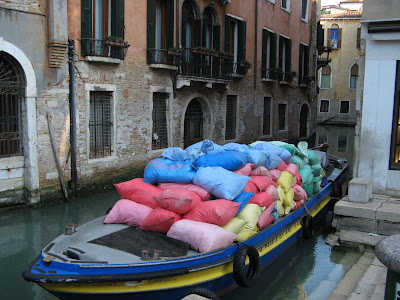 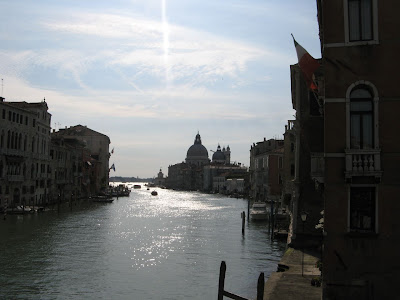 Entrance to the Gran Canal 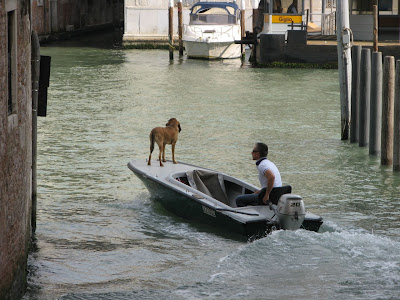 Walking your dog alla Veneziana
After picking up Dad and Jane from the hotel, we had a low-octane wander, passing by the music museum before heading to the train station via a flea market - something I absolutely didn't expect to find in Venice. Dad got a lovely leather bag and Jane got an old, brass wind-up travel alarm clock - the perfect thing since her new plastic one had died. We also passed an unusual vegetable market: 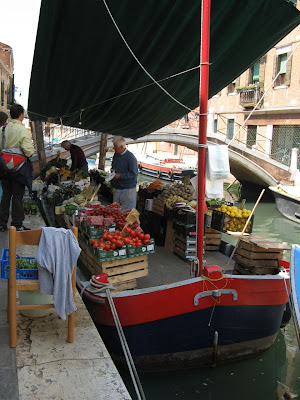 The train ride back was more atmospheric than spectacular as the Alps were shrouded in mist and clouds.

Our last few days in Basel we explored the botanical gardens, stopping by the mill museum and seasonally visiting just in time to catch the end of the Rhododendrons. 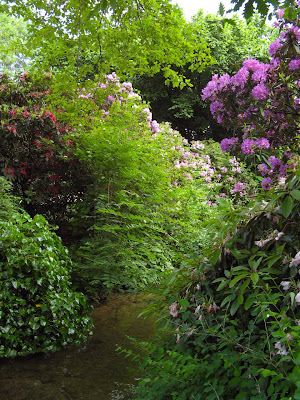 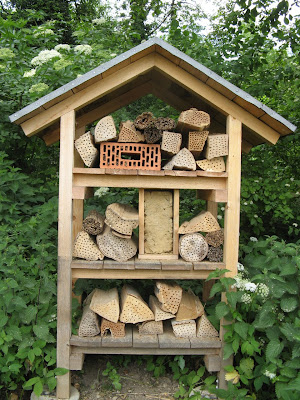 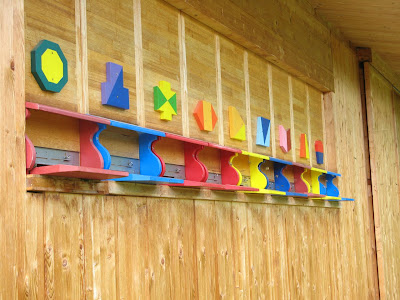 Non-wild bee hive, apartments no. 1-8 - apparently
the bees aren't completely illiterate!
There was less than a week between Dad & Jane's visit and heading off to Canada myself, a week earmarked for hyperproductivity: house-hunting, and the performance of a Mozart mass and vespers, for which I got to play the bass part. I do love playing basslines - from there it's possible to drive the dynamics and phrasing of the whole section in a way that seems much less pushy as when done from the top. Also that week Helen and I headed out after the rain and got some (very clean) Elderflowers from which we made cordial. 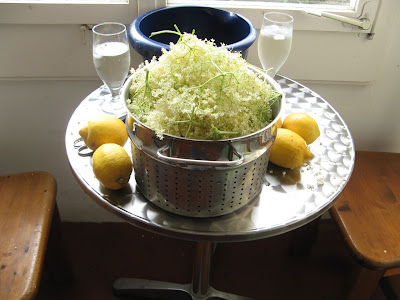 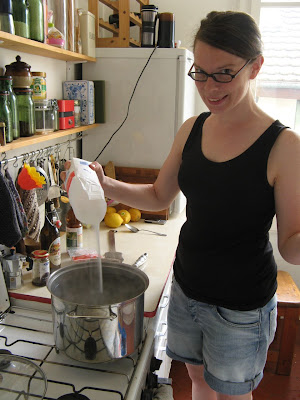 My week in Montreal feels utterly surreal now. I managed to sign a lease just two days after I landed, giving me a bit more time to be social, but most of the time I just spent wandering about the Plateau or the Jean-Talon market pondering the impending move back. It's still just as terrifying as it is exciting, but so many things are I suppose. 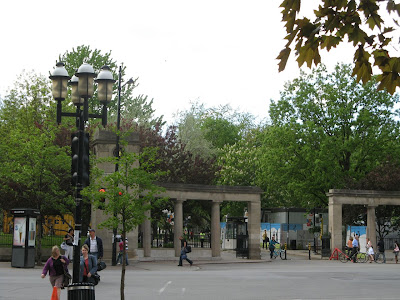 Though I'd booked the flight to go househunting, in my mind the trip was more and more about weighing up past and future, and of course Bruce was always in my thoughts. I was grateful indeed, while I was there, for having people around who knew him. I optimistically stopped by his house on Friday morning to say hello to Susie, but she was off in France, until Wednesday I was told. I was leaving on Tuesday. Hum.

The morning of my flight I was out of sorts, so much so that after a failed attempt to put the cat outside, during which it bolted through the house with it's leash on and got quite scared at getting it caught and being pulled to a halt, I left the door to the balcony open briefly. Did the cat leave? I couldn't find it, or hear it, anywhere in the basement where it had been the minute before so I assumed the worse and spent the morning looking for it. It's not an outside cat, yet. Finally I decided I had to pack, and upon putting my bags in the basement, heard his bell in the corner - whew.

When it was time to leave the airport bus dropped us off at arrivals. I was deliberating whether to go up to departures and check in right away, or take advantage of free bench space and free wifi and make a phone call to Germany which was rather urgent given the time difference. The bus had been stuck in traffic and was late anyway. But I sat down to make the call. In the middle of it, who should walk by fresh off a plane from France but... Susie.

After an awkward minute of "danke, ja bis dann, ja kein problem, ich freue mich auch - TSCHUUSSSSS" as I wound up what felt like the least significant conversation I've ever had, I felt like the luckiest person in the world to be able to stand and talk to Susie then and there, to hear some more stories about Bruce's time in hospital, and about some of the projects to be completed in his memory (see Brandenburgs 7-12 here).

I landed in Basel Wednesday and had a brief nap before heading to a Mozart Requiem rehearsal - Barmy, yes, but I wanted as much time as possible in Montreal. And why should I have come back a day early for a rehearsal where I was forced to write "No Text" about the Dies Irae, really? In the end, we are following the choir's text accents, just playing louder, which seems to be what the conductor wanted anyway.

Now I've got the heebeejeebees about playing Tuba Mirum again tonight - I suppose if I ever have to play tenor on a Mozart Requiem and I don't get them, I'll know it's time to retire.
Posted by Catherine Motuz at 20:21