The last two days were mini Indian Summer, so what luck to have planned yesterday to be out in the canoe with my Dad. We chose as our lake Big Rideau, the lake we went to almost every summer when I was growing up, where we'd caught lots of fish, where I'd learned to fillet them, and where I would spend afternoons catching frogs and whiddling sticks and all those things kids do when brought to some place without television. It was a good choice too, because as we got closer, the clear day became misty. When we got to the water we couldn't see more than 10 meters or so...we might have hesitated to launch into another lake in a whiteout, but on this stretch of Big Rideau we knew well enough that the shoreline would always tell us where we were. 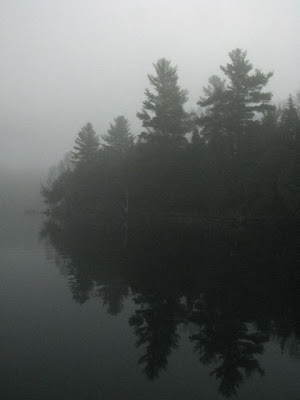 We drove into an access road and saw a white-tailed deer almost right away, then a muskrat. We launched at the Lally Homestead, the ruins of an 1860's farm situated in Murphy's Point Provincial Park. It also lies on the Rideau Trail, which runs from Ottawa to Kingston (as does the lake and canal system), and we had to park the car at the trailhead and portage in. Here's me carrying the canoe, which is made of Kevlar and very light at around 23 kg. 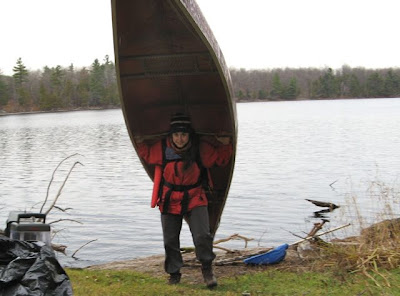 Portaging the Canoe
We headed onto the lake in the mist, only to be surrounded by the calls of all the dozens of Canada geese who were shocked at our presence. 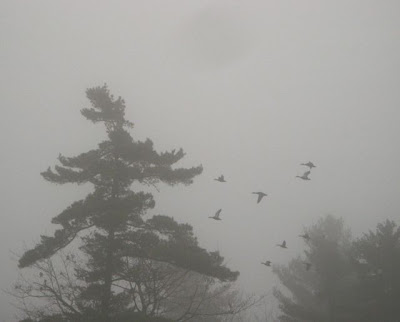 Canada Geese in the Mist

We cast a few lines near the beach, where we've caught many a largemouth Bass, but there was nothing at all, so we headed down the bay to the narrows which open up onto the main part of Big Rideau: 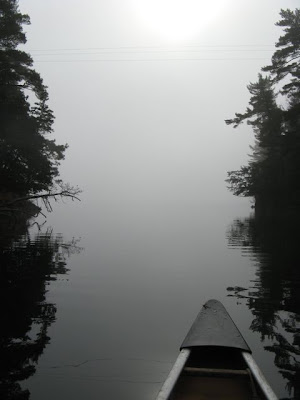 The mist was starting to clear to reveal a gorgeous blue sky, so we headed to one of the canoe-in camping sites for lunch. Again, a walk down memory lane as I've spent weeks of my life at a favourite site, where now we set up the stove and made pea soup and grilled ham and cheese sandwiches. 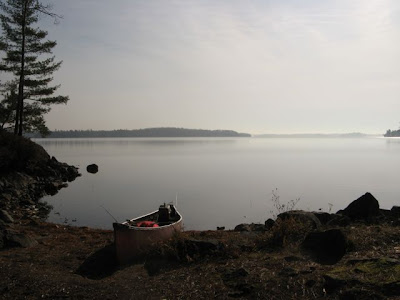 On the beach at the canoe-in site
When we left, we noted that the water was incredibly clear, and the rocks on the bottom were covered in zebra mussels - a recent addition to the Rideau ecosystem. These sharp little beasts eat by filtering food out of water and each mussel can filter up to a liter a day. In these quantities, entire lakes are being filtered every day, which explains why the water was so clear. 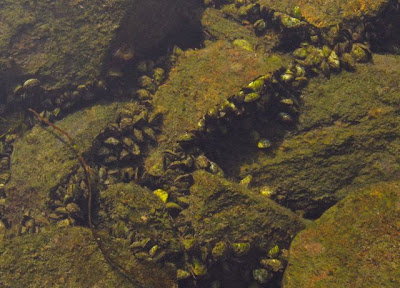 Zebra Mussel Infestation
The canoe out to the old boathouse, where the pike normally live hasn't changed at all, except that it seems shorter every time. The coastline is covered in wind-swept pines, birches, and the big granite rocks which characterize the Canadian Shield. 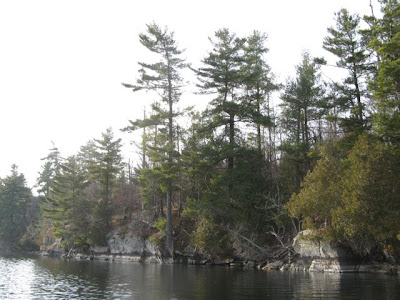 Coastline on the Canadian Shield
It's hardly wilderness though. Cottage country rather. Once we left the boundaries of the provincial park, there were cottages spaced out along the lakeshore. This one had an Inukshuk to greet the paddlers-by. 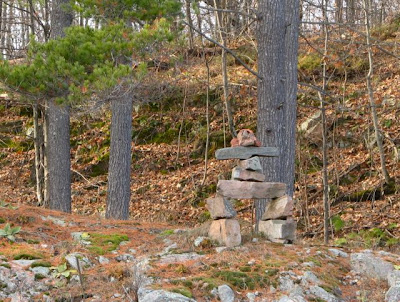 Even by the old boathouse, there was not only a distinct lack of nibbling going on on the part of the fish, but no signs of life beneath the water at all. There were even a few flies sunbathing o the surface. We did see a few loons though, and on the way back to the homestead, came across this muskrat lodge (which we'd passed in the morning but hadn't seen in the mist). 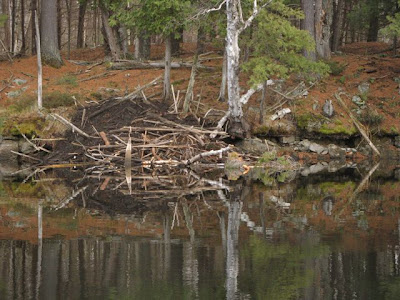 With still no sign of fish, we went to the beach again to see if at least there were minnows, shiners or perch. Nothing. Today I read that all fish will seek out deeper water once the weather cools, so our assumption that coolness by the shores would bring the trout out of their depths was simply false. Oh well. The paddle was lovely, and we weren't the only sign of disappointed fishing expeditions on the lake: 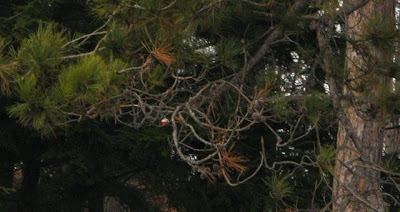 Red and White Bobber in a Tree

On the way home, we passed many a tumbledown grey barn and some silos and I thought to myself that, actually, North American architecture is really interesting. It was Gawain who pointed out a few weeks ago that front porches are not common elsewhere, and it's in North America that timber frame houses have undergone a revival since the 1970's, mixing the old German tradition with new techniques and new materials, allowing for large insulated windows and such. We really have our own style now - so why don't we celebrate it?

Today it is rainy and blustery and I'm sitting inside drinking tea. I did get out earlier on, with amusing results: as a countermeasure to the grey and cold ennui, I made an impulse purchase and am now the proud owner of a small purple ukulele. I bought it because I think it's important to keep music-making on an amateur level in my life, just do it for fun and not for money. Having harpsichords in every practice room at the Schola served that purpose - 10 minutes of random preluding in a sackbut break would leave me full of gumption again. I've already been in touch with a Basel fidel player who will give me some leftover gut strings...now I just need to find a gamba or theorbo player, cook them supper, and learn how to tie frets so that I can play in tune.

A Grey Barn and Farmhouse
Posted by Catherine Motuz at 03:42