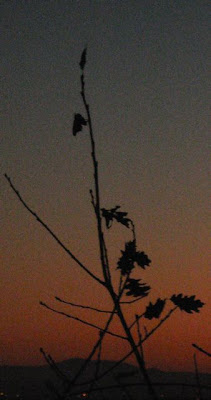 Mary Queen of Scots got her head chopped off on the fourteenth of November.

This little history lesson was recorded in 1956 in Campbeltown, and given to me by David McGuinness.

I finished the grant application and triumphantly mailed it off on Wednesday. If I don't get any money, I still feel a sense of triumph for handing it in in the first place, it was a lot of work and a lot of waking up of old brain cells. Now onto some papers to form part of my McGill Ph.D. application - at least I'm quite excited about some topics and have a bit of momentum.

On Thursday I went to the weekly singing off of facsimile session first thing in the morning. Almost everyone had a coffee but me and I must remember to bring one of my own next time - it was rather tortuous to watch! The singing was great fun though: I can't find an interesting-looking motet right now, but here's a very good song printed by the same printer, Ottaviano Petrucci to give you an idea what it looks like. Not that different from modern notation actually. 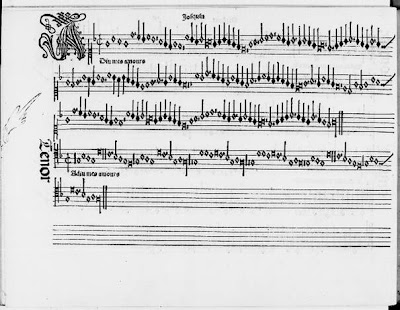 Then I did my first hour and a half of my life teaching a group lesson on sackbut, which was very fun and I'm pleased I get to do it twice more in preparation for McGill's performance of the Monteverdi vespers. I've been working on explaining meantone temperament to melody instrument players - I'll post a link when I come up with a web page (there are others if you look around, but geared to keyboardists).

I needed to stay in downtown Montreal for a talk that Iain Fenlon was giving later that evening, so in the meantime I did what I've been meaning to do in a long time: I climbed the mountain. Sitting in a café, I noticed the sun was already going down (it was just gone four!) so I left at a quick pace. The first step was to locate the hole in the fence behind the residences that leads to the mountain path. Sounds exciting, but it's become much more of an official way into the park since my days... 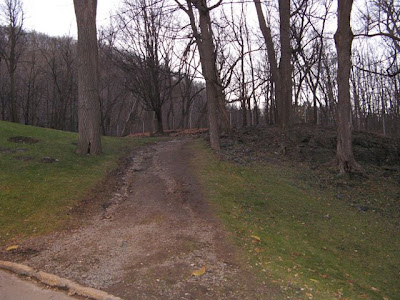 Not really a secret path anymore

I marched up the path and the many steps, seeing the sky behind me grow purple through the trees, and reached the top in time to miss the sun but still catch its glorious colours in the west. The moon was out too. 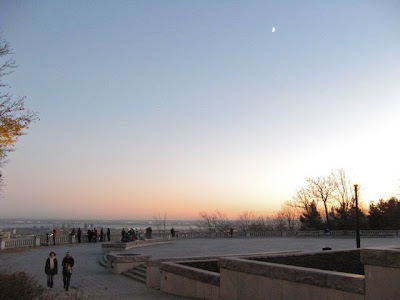 Piazza at the top of Mount Royal

I stood on top of the mountain, taking in the view through dusk and into twilight, pondering this city and the hills and the ("mighty") St. Lawrence in the distance. I was pleased when after 10 minutes or so I ran across the bronze book that tells about Jacques Cartier standing in the same place, doing the exact same thing whilst looking out over the village of Hochelaga in 1535. 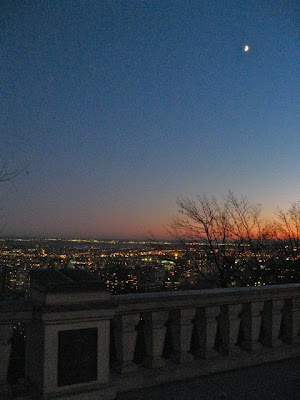 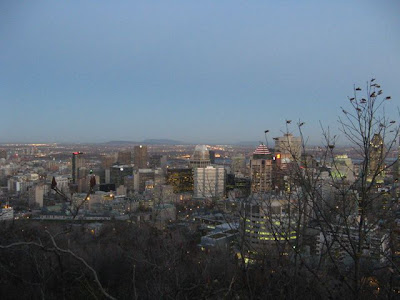 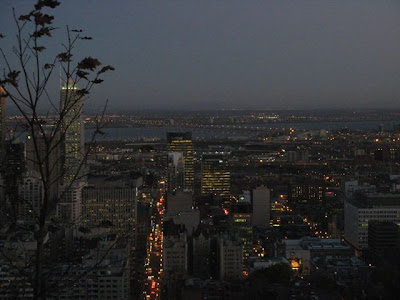 Peel Street and the Mighty St. Lawrence
As often happens, I got distracted by having my camera in my hands and took silhouette pictures on the way down. 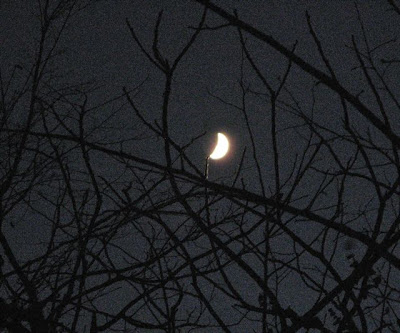 You can almost see the other side of the moon.
Iain Fenlon's talk was fascinating, painting a picture of Venice in the 1570's by describing the visit of Henry III of France followed by the Plague outbreak which devastated the city. He spoke again the next day on music printing in Spain, the study of historical margin notes and of trade routes. He was quite a good story-teller and managed to make both talks lively and informative and give me hope that a Ph.D. really is a good idea. Where is still up in the air though.

Now, unchained from my computer for a brief time, I'm off to go have second breakfast near McGill, and then will make my way to Ottawa to do some visiting. If the weather holds up tomorrow or Tuesday, I might even head out onto Big Rideau Lake in the canoe and do some fishing with my Dad.

Posted by Catherine Motuz at 17:41