Just finishing off a toasted St. Viateur Bagel while my coffee brews. I need to write a grant application today, but first I need to do something restful to divide this crazy life into bite-sized chunks. A walk up the mountain would be an option, but given the cold and cloud, updating my blog is most appealing.

After painstakingly explaining to my European friends that Canadian October is pretty normal and one can't expect snow until a few weeks yet, I woke up on Sunday morning to this view out the window: 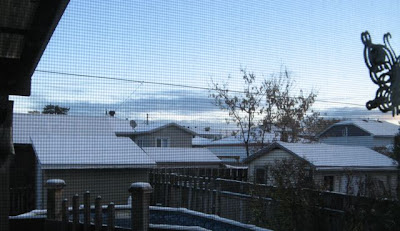 Oh well. Sunday's concert was lots of fun - I've always wanted to do an all Biber and Schmelzer programme and this one was really well-balanced. I got to play top trombone on the instrumental stuff and bottom trumpet of 4 on a Motet and Magnificat. I love playing bass parts generally because you can give direction to the whole ensemble and , and while I had only 4 notes to choose from, it was never boring because I had to figure out which notes were more important than others - a decision which would boom moments later through St. Léon de Westmount! I'd like to do more of that...

After catching up with friends post-concert and celebrating Shannon Mercer's awesome recital with La Nef two nights before, we sang in Shannon's birthday as off-key as only musicians can: no two pitch levels the same, please!

Monday morning I went down to a car-rental place only to find that even though my Swiss License - which has no expiry date - says "Permis de Conduire," no one will accept it here as the rest is in German. Boo. But the car rental company transferred the reservation to a branch near where Gawain was staying and we hit the road in an hour. We didn't go to St-Georges or St-Nicolas or St-Redempteur. 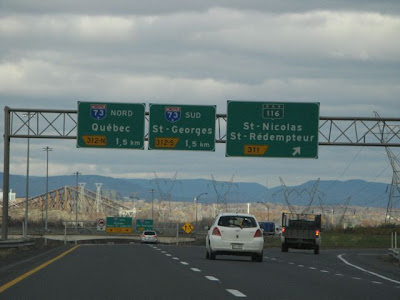 It was hard not to drive straight on towards the
mountains and find a casse-croute in Tadoussac
How very odd that when a European comes to Canada, I want to show them the most European part of our country. But Québec City is very beautiful even from the first view through the city gates. 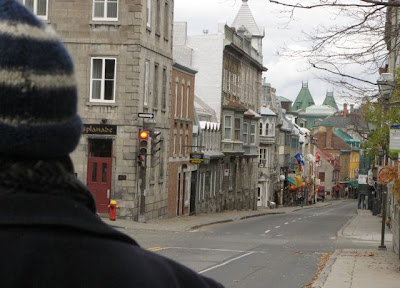 Toque knitted by my mom and main street

Lunch consisted of Pea Soup, Poutine, Tourtière and Maple Syrup pie with local beer, one of the many gastronomical successes of the week. After last week in Germany, where it's considered a bit cheeky to order tap water and not something expensive from a bottle, it was astonishing to both Gawain and I how Canadian restaurants keep coming around and topping up our glasses of tap water, which came often unordered. But it's maybe more necessary here too - the air is so dry and the forced-air heating so ubiquitous that it's very hard to stay hydrated at the best of times. I suppose with such a thirsty population and excellent microbreweries all over, this probably helps to keep public drunkenness down too. 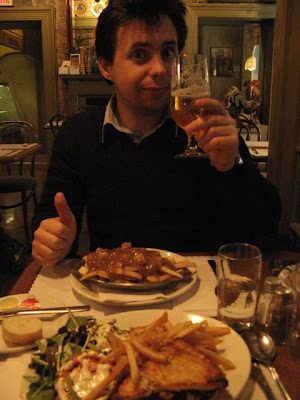 Cheers
Lots of calories to burn off, let the wandering begin! Our first stop was an Inuit Art Gallery where we got explanations of Inukshuk and other stone and bone sculpture from very far North of here. In a little alleyway, we came across this bronze figure of a Log Driver, reminiscent of the NFB short, Log Driver's Waltz, which Gawain and Kirsty saw for the first time as a prelude to a film about Morris dancing in their village hall in East Knoyle. I'm quite pleased that if I hum a few measures, Peter gets it stuck in his head, and that Dawn was able to sing along the other night in the pub. Methinks I'm home! 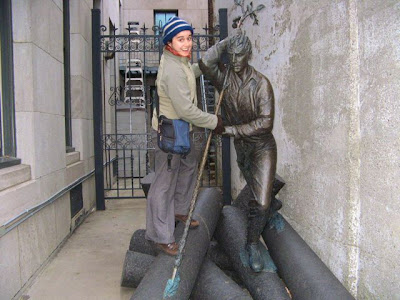 I'm not sure that it's business of yours
but I DO like to Waltz with the Log-Driver!

We then headed up to the plains of Abraham, where the English scaled the cliffs in the dead of night and took Canada from the French. Sort of. 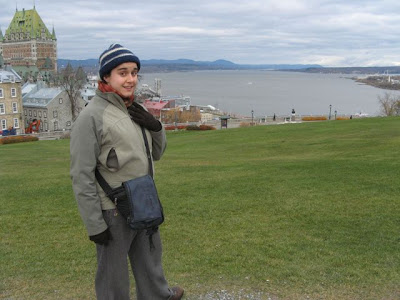 We thought we'd seen it all at dusk and were about to head back when we looked over a little lookout and, what's that? There was a whole Basse Ville under us. So we wandered down to the most charming part of Québec city. 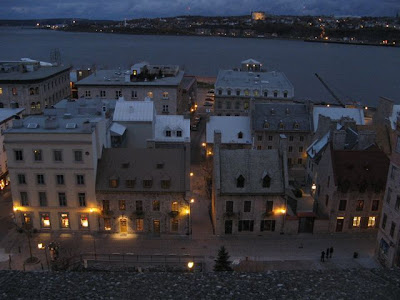 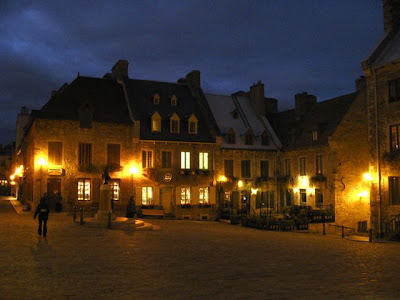 The Old Old City, with snow on a rooftop

Bemoaning our lack of hunger whilst surrounded by lovely cafes and bistros, we wandered in here for a coffee and got instead enticed by the fish soup and salad with rabbit livers. And coffee. 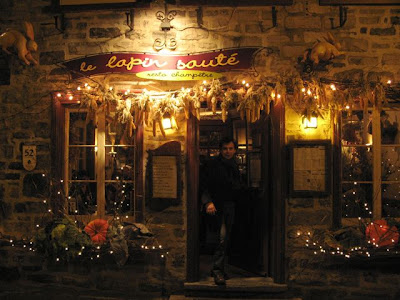 Then it was time to go back to Montreal.

Montreal has been lovely too, there's been a lot of going places by foot and making pilgrimages to sample local cuisine. Here is a complete meal from Schwartz's Charcuterie Hébraïque: 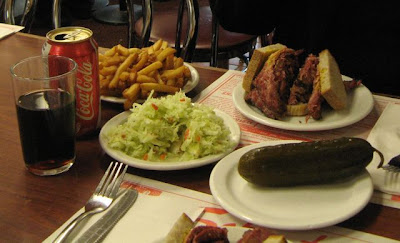 And some typical multi-coloured façades: 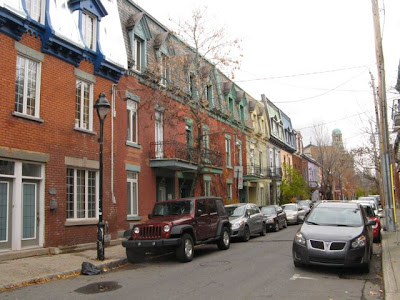 Winter backed away eventually too. I was a bit late for the fiery reds, but the yellows in the park were still there and still impressive. In Switzerland they don't tend to let the leaves stay on the ground long enough to give off their distinctive scent or be kicked around by pedestrians. 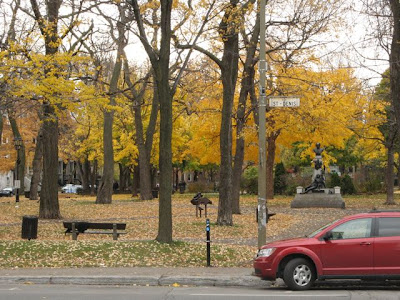 Tuesday afternoon I was looking around the plateau for a place to have a coffee when someone on the street said "You must go to Club Social, it's the best." And indeed, it was the best coffee I've had in the past few months. May I say? While I have had some really mediocre roadside filter coffee since arriving here, every time I've gone for a cappuccino the quality has been at least as good as in Switzerland. Yey!

Yesterday the early brass of Montreal got together and we did a reading session a7 (Matt Jennejohn was there too but had to dash off before we could take a photo). Reading sessions both vocal and instrumental are a common occurrence around these parts. 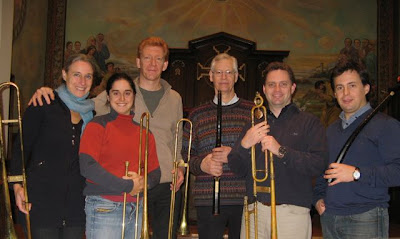 Posted by Catherine Motuz at 15:41