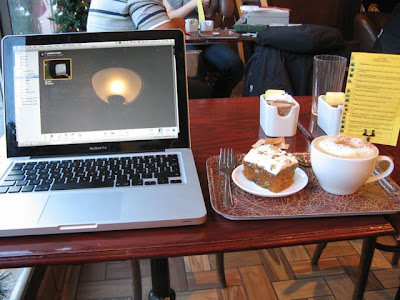 The past few days have been a good balance between visiting, Ph.D. stuff, concert admin, getting exercise, playing sackbut, and listening to others play. Normally these things don't balance out very well at all, so that's quite refreshing!

Coming back from Ottawa on Wednesday night, I met someone who had been on the bus for three days - come from Calgary. 20 or so, he didn't know any French but was heading to Mont Tremblant to learn some and find some work for the winter, traveling with a few bags of clothes, a bus ticket (that's "coach" to UK folk) and some hope. Quite sleep-deprived by the time we started chatting in line for the bus, he was starting to doubt the whole thing though - a state of mind not helped by another 20-year old telling him she thought he was pretty crazy. I, on the other hand, was reminded how tired and terrified I was, sitting underground in the Zurich airport train station on Sept. 29th, 2004, with two suitcases full of myriad odds and ends, all my family and friends an ocean and the entire country of France away. I remember sitting there waiting for the Basel train, suddenly remembering that I had a chocolate chip cookie that mom had bought me at the airport. Never was a cookie so comforting as that one, I savoured every bite. Now, when we got off the bus in Montreal, where this traveler would have to wait all night for the next bus to Tremblant, I told him that I admired his courage and gave him one of the chocolate bars I'd brought from Switzerland before saying goodbye.

Thursday: more singing from original notation and more sackbuttery, and then nothing at all. I went to bed extra extra early, which might account for why yesterday was so good. I had some time at the library, then met a friend for coffee, went to a harpsichord recital, then picked up a bicycle from a friend in Westmount and biked the 13 km back home, almost all of which was along bike paths protected from the road with concrete dividers - a nice addition to the Montreal infrastructure! Being back on a bicycle was great - I'd forgotten about that level of endorphins, which I re-acheived this morning biking to the Metro station with a very strong headwind. It's a north-west wind again, bringing arctic air: a proper crisp Canadian winterness which doesn't mess with the blue sky. Thank goodness though for the little headband I bought the other day: my ears are still on.

This morning a bit of hard-core practising to get in shape for the upcoming Vespers. It's been good to have some time off, but after a gentle warm-up I threw myself into some Bartolomeo de Selma dulcian music for a challenge. I find often that my face will figure out what it needs to do better if I concentrate on making music than if I am thinking directly about technical things. Do other instrumentalists feel the same?

After the bike to the Metro, I was frustrated to find a 5-place bike rack with 10 bikes in it and no-bike signs on all the poles. So I brought my bike with me on the train. Oh well. I had sort of decided by then that today was a good day, but this note stuck to the inside window of the metro train cemented it for me: 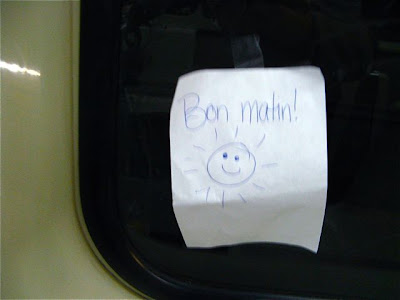 Random Cheer on a Saturday Morning
(...would this be considered litter in Basel?)
Posted by Catherine Motuz at 20:23