Last Friday began with another ridiculously early morning started with catching the 4.58 train into London. I wasn't alone at least, a sleepy fox kept me company on the platform: 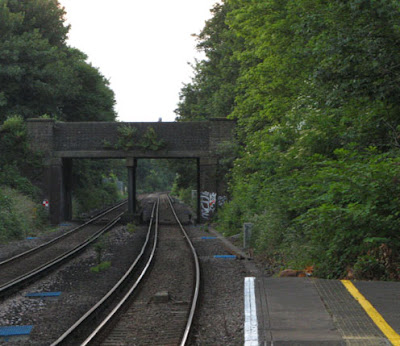 Crofton Park Rail Station at Stupid O'Clock
Transport for London, which has been generally quite helpful in telling me how to get about, made a rookie error which could have resulted in my missing my connection to the Eurostar. It told me to turn right from Holborn Viaduct onto Farringdon - looks good on the map but then... viaduct...hmmm - Holborn Viaduct is a bridge! Unwilling to jump the eight meters onto Farringdon I found another way around and caught my bus!

Despite waking up so early, a connection of almost two hours in Brussels meant that I got to Cologne just in time to make my 2 pm rehearsal with I Fedeli. What a treat it is to take the time to try to figure out the different affects we had to get across and to play around with tempi, dynamics, phrasing, articulation, and ornaments to bring it all across. We wrote barely anything in our scores too - I think if you have enough contact (aural and visual) with the people you're playing with, you don't need to write much, you can make decisions together about how things are going to go as you play, and you even have the freedom to change it from concert to concert (which definitely happened). We also spent some time on tuning, exploiting to the maximum that we had to keyboard to play with, finding where deeply unusual F-sharp and C-sharp major chords might sit on our instruments.

The next day one of our cornettists had to go back to England so the rest of us stayed and practised without him (including some 4-part repertoire in case the volcano exploded again...you never know...). But it was very relaxing - we had to drag our cornettist maestro away from the breakfast nook where he had tucked himself in with his guitar. 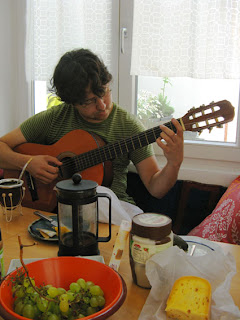 That evening we headed to Alden Biesen, where we would play the next day - also a luxury to be put up the night before when actually the drive wasn't that long. To my delight, we were put up in the same place as last time I played there - a lovely little Bed and Breakfast we all to ourselves, called Parva sed apta mihi (Latin for "small but fine for me"). 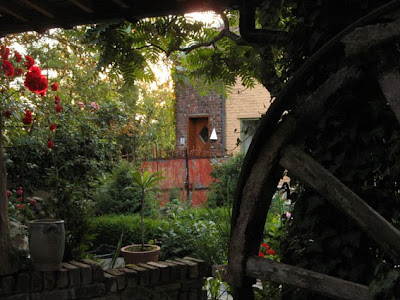 As we were surrounded by fields, orchards and forest, we couldn't resist but walk the scenic route to the castle, where Capriccio Stravagante were already sampling the many fine Belgian beers at our disposal. 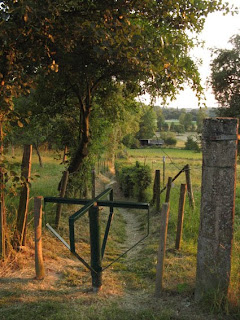 the way to the castle 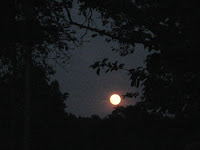 The next day our cornettist arrived back in time for the first concert after all. Playing outside was a new experience for this ensemble, but a good one I think. It's very narcissistic to play in churches that amplify, sweeten, then echo back every note that you play, but on the other hand the echo can make individual notes get lost among a sea of echoes, so often we have to play artificially short notes. Playing outside, the sound doesn't get any natural amplification - on the other hand we can hold our notes and lines as long as we want and all our differences of articulation will carry. For three of the four concerts we played in a colonnade, giving us a tiny bit of acoustic and a very nice view: 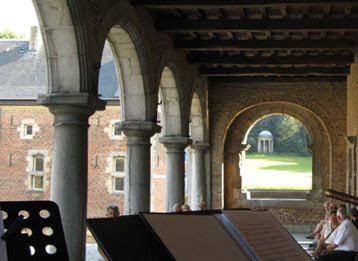 view from the stage 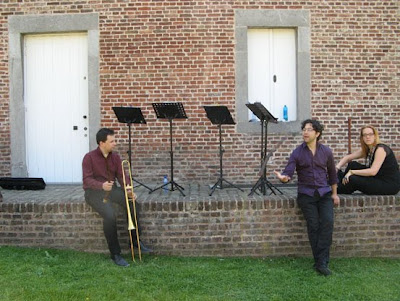 waiting around to play again

Between the third and fourth concert, we had time to either watch England be trounced by Germany in the World Cup, or to go hear Capriccio Stravagante play the piece from which they take their name. The concert was fantastic, I still have the catchy bits of the Capriccio whizzing around my head, and still plot one day to take the extended techniques like hitting the strings with the wood of the bows, and the random chaotic bits with meows of cats, into a composition class and see if they can date the piece. But musically what sticks in my mind most is their simple string version of Rore's Ancor che col partire - I've not heard such attention to text on violin and viols before, and was in utter awe at the pianississimo towards the end. It seems counter-intuitive perhaps, but if you really want people to listen attentively, play as softly as you possibly can.

An idyllic evening walk and sit in the garden finished off the day - only the I Fedeli curse haunted us - we never seem to be able to enjoy a post-concert and post-rehearsal wind-down all five of us together: this time one had to rush off to Brussels, another back to Cologne.

After a better-connected Eurostar journey the next morning, I met up with Ricardo at The Harp near Trafalgar Square, where he reminded me that while I'm here I should think about taking the time to be a tourist now and again. I think he is very right. I'm here in England now for six weeks without trips to "the continent," so I hope to settle in a bit better and find the time to go visit the galleries and museums (many of which are completely free). Tech week started again today at the Globe though, so it won't be for another week at least.
Posted by Catherine Motuz at 23:43