Yesterday was a bit silly. Normally one rehearses creation by rehearsing everything with the soloists first, then the next day the choir and trombones 1 & 2 come and we rehearse the rest. This time we did all the choir bits on Friday night, and theoretically had Saturday free... but we have two notes, an Ab and a G which fit in a tenor aria. So, rather than just having a free day, we had to hitch a ride into town (we're being put up in a country house and none of us trombonists has a car), wait an hour and a half, play our two notes, then wait another four hours to get a ride back. So I wandered about Bad Nauheim, a beautiful town with lots of parks, and took some pictures before sitting in the church and started my taxes. 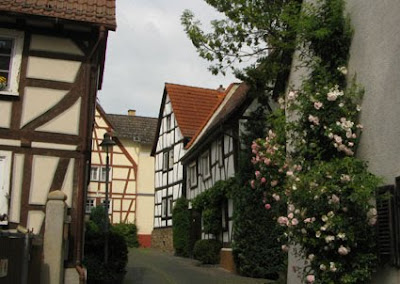 The plan after was to take my trombone when I got back to the country house and do some proper practice (2 notes isn't much after all), but on the way over I felt a sudden sore throat, achy joints, fatigue and a temperature, and looking in the mirror I was utterly pale. So much for that then. After an hour of stillness, not feeling very much better but definitely needing food, I hiked 40 minutes through field and forest to the nearest restaurant in the company of Gregor Antony, a cellist who was a founding member of the orchestra years ago, who lives in a castle just over the German border from Basel. Then I ate goulash soup and fried mushrooms on spätzle - part of my indulgence of German food these past days which has included coffee with ice-cream in it, apple juice soda, and the white asparagus of which they're very proud.

The walk back was gorgeous - a near midsummer's night sunset: 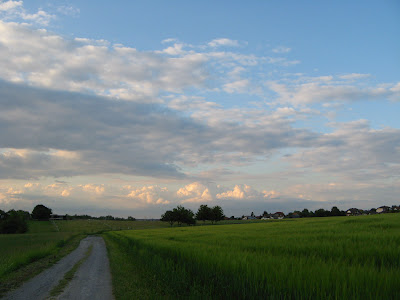 the nearest restaurant was at the next left 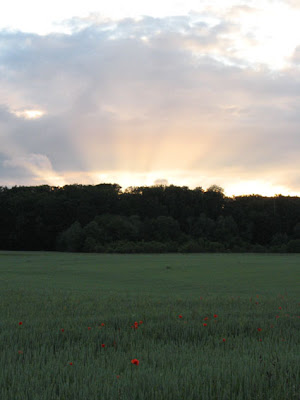 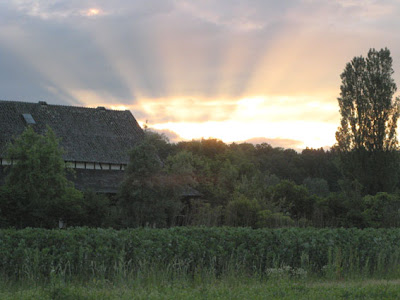 the house next door
On return, a schnapps nightcap to try to kill whatever was making my throat sore and off to bed early. There was a random unopened 1.5 L bottle of lemon-soda (and a half-empty one which I left alone) in my room so, hoping it was a leftover from a previous guest, I unceremoniously emptied most of it into the sink and filled the bottle with water and brought it to bed. Whenever I feel sick I drink uncomfortable amounts of water, but the three litres over the course of the night did result in my fever breaking towards dawn and my feeling a bit more alive when I finally got up and went off to breakfast to switch to drinking vast quantities of orange juice.

Now I feel well enough to play a bit of trombone again, so I'd better do that.

The concert went well despite a bit of stress beforehand - the local café taking 45 minutes to serve a bowl of soup and cup of coffee - they probably thought we should relax, given it was a Sunday afternoon. The atmosphere in the orchestra was very positive, and the choir excellent, it was an easy concert to enjoy.

Now I'm at Helen's in Freiburg with a bit of insomnia. I was upset that my plane ticket to go back to Basel for a Bach Cantata had gone up significantly in price last week while I was waiting to be paid for something so that I could buy it, so I went to bed without buying anything. Couldn't sleep though - a little voice said I should just just suck it up and buy it now. And guess what? Kayak had failed to notice a seat sale. I went onto swiss.com to book it and it was on sale for less than the easyjet flight. I scooped it up. And the kind people in Basel said even though I normally live there, they'll pitch into the cost of the flight since I'm basically living in London. And I get to play a Bach Cantata too? 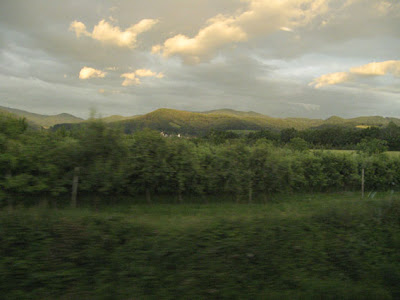 the Black Forest from the train outside Freiburg
The next two days will be administrative mayhem. Thank goodness for a couple of rehearsals of my favourite music with some of my favourite people tomorrow afternoon!
Posted by Catherine Motuz at 01:52