Frankfurt: the silent city. At least, this afternoon it is, as the stations, subways, streets are bare, and the Germans are all crammed into bars and cafés watching Germany play Serbia. It's tense too - 6 minutes to go now and the Serbians still lead 1-0. I'd almost thought I'd escaped the fever by flying out of London the day of the England-Algeria match... I've been avoiding the crowds and the rowdyness of the games but I imagine I'll start watching towards the end. I do think the FIFA is important to the world: I share the theory that it redirects some of the instincts and hormones which used to cause bloody conquests into a more peaceful activity.

Yesterday evening, I went to the first UK concert of the Magdalena Consort, a singer-based ensemble founded by Peter Harvey. The experience of hearing Bach Cantatas has changed completely since I moved to Basel and learned German - after reading through the texts and translations for words I don't know (in this case difficult as the translations were poetic - completely different from the German in meaning and flavour), it was a luxury to put down the programme and just listen to the four sensitive singers deliver the text. After playing and hearing only the short bits of incidental music for Henry IV, or maybe it was (is it possible?) a bit of homesickness for German culture, I was more sensitive than usual to the cathartic elements and tears came to my eyes during the simple quartet with organ and the text "Welt, Gute Nacht."

After the concert, over an unlimited supply of Madeleines, I had the chance to catch up with Charles Daniels (who is about to head to Montreal to participate in the Montreal Baroque Festival) before attempting to head back into Southeast in the company of Alison McGillivray and Claire Salaman, the latter whom I met for the first time last night. An incident on the tracks meant that there were no trains at all, so we went out to find some supper before taking the bus home. Interesting discussions ensued about all sorts of music-related topics. All of them will eventually weave their way into this blog (some already have), so I'll focus on one question for now, thoughtfully posed by Alison: "Why don't musicians warm up together?" Actors and dancers warm up together all the time (at the Globe it's a set regime), but musicians almost never. I've had the experience that in my studies, we trombonists would often get together and tune a few chords before going onto the stage, maybe practise a few tricky sections, and as a result went into concerts more confident and - crucially - better listeners. We still do it occasionally, but while it still usually makes the performance better, I do sometimes get the feeling that we feel a bit embarrassed by it, as though we shouldn't need the help of our colleagues to play our best. What a pity... Maybe attitudes could change if someone could prove that listening is a skill that also needs to be "warmed up" - then who could argue that you can do it properly alone?

I had nice experiences in both airports this morning - the smallness and calm of London City was a relief given I hadn't slept a wink the night before. Near the gates, there was also this enlightened sign, which though looked-for, I think I saw today for the first time in my life: 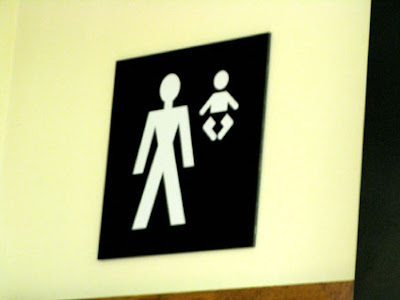 We landed around 10:30 in Frankfurt and got off the aeroplane bus into a deserted hall full of reclined chairs. I couldn't imagine what people would wait for in this arrival area, but as I was completely exhausted at this point, I didn't care, and sat in one of them, closing my eyes in the more-or-less peace and quiet and waiting for sleep. Funnily enough, there was no lineup (UK: queue) when I moved to passport control quite refreshed two hours later. It's a good thing I hadn't checked any bags, I'm sure they would have been taken and destroyed. 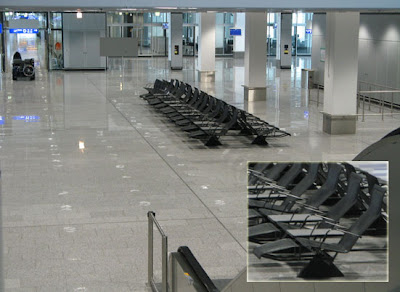 Last night wasn't the only social night of the week: on Tuesday I met up with Maeve, the other Concerto Caledonia roadie, who I met in Scotland almost two years ago and who is studying cognitive science in London. She's promised to hijack me when some Celidhs roll around, and elucidated her dream of living in a narrow boat on the canals near Paddington station - a part of London culture I'd never known but I'll have to make a trip up to see for myself. 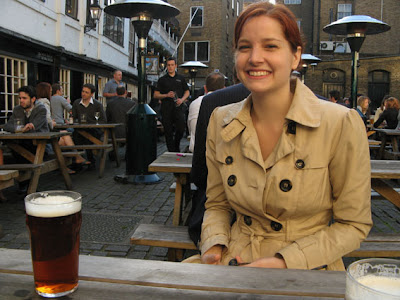 Maeve with Old Speckled Hen
I've biked to and from London Bridge twice now - getting quite lost each time thanks to construction and a distinct lack of street signs on major roads, rendering my London A-Z somewhat useless. But the main point was anyway to get some exercise, and as a welcome side effect, pummeling along on my mountain bike on the left seems to have startled me out of a lethargy which three weeks without cardiovascular exercise brought on. I sometimes forget just how much more alive I feel if I can get my heartbeat up every so often.

Time to head back to Frankfurt central station: the gig's not here, it's in Bad Nauheim, a half hour North of here. I came here though, because having been told originally that the rehearsal would be at 2, I organized for someone to bring me a classical tenor trombone from Basel - now I'll meet them at the station and recover it. It turns out we don't have rehearsal until 7 after all - but the time has flown by and I'm pleased that I'll have a good hour to warm up and get used to A=430. I'm quite far from the station because the station was boring. With memories of the bustling marketplace I hopped on the U-bahn (subway; UK: underground) to Konstablerwache, only to find desolation and a single solitary stall. A good one though. When I pass by it now, I'll buy some fresh German black-cherries to tide me over through the rehearsal.

Here, by the way, the view from my bedroom window in London: Posted by Catherine Motuz at 01:46