There are many notes posted around the Globe to remind us constantly of health and safety regulations, which rooms we mustn't bring our coffee into, who to call if we forget the codes to the doors, and, crucially, reminders to mentally prepare for the times ahead. This was posted backstage on a pillar: 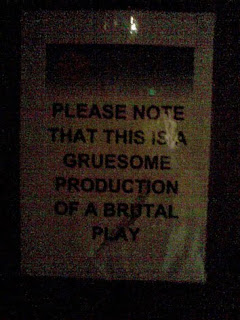 I presume it refers to the Scottish Play, as I have yet to see a non-bloodied up member of the cast walking around backstage.

Tech rehearsals have been full-on, we're to remain in costume even over lunch breaks the rest of the week for the cause of efficiency, wearing massive white rags to protect our costumes. We're also being treated to plenty of goodies: 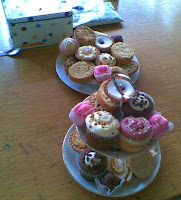 offering on the table at tea time

Tomorrow we end rehearsal at 5 pm, meaning I will have the chance to cook myself a proper supper. London has lots to offer in terms of value takeout (UK: take-away) and I quite enjoyed my cheap but good sushi by the Thames in the sun this evening, but I quite look forward to sitting in the back garden here with a hot piping home-made something tomorrow (haven't decided what yet). The packaging involved in buying a ready-made salad is crushing - I'm not as green as I probably should be, but since the discovery of the North Atlantic Garbage Patch, I have a hard time throwing out plastic: perhaps the plastic bowl I used for 8 minutes to eat my chicken and spinach salad will end up lodged in the digestive system of an albatross? Or never quite decomposing for the next 1000 years? So I've been buying my sandwiches at EAT. rather than M & S, since they have recyclable packaging, and have been hoarding some of the plastic until I find out more about alternative ways of getting rid of them.

It's been hitting home in the past couple of days that in the months of July and August, I could easily not play anything which lasts longer than 16 measures. I must try to remedy this.
Posted by Catherine Motuz at 22:06