At last a bit of time to write again. I tried last night, but I was so knackered I could barely string a sentence together, and I got distracted by a BBC costume drama (this is apparently a common distraction in this country). Anyway, thanks for checking back: I've made an extra effort with the pictures today to compensate, and I apologize in advance for the length - it's been a packed few days.
I left the house in Lewisham at 5 am on Saturday morning, when the sky looked like this:

and was in Echternach, on the Luxemburg-German border, in time for lunch, traveling by land the whole way. Another Monteverdi Vespers, but when I log it in my little black book of Vespers, the stats will look entirely different from the ABO one. The vocal forces, instrumentation, pitch, keys and tempi were all completely different, the tempi being so drastic that while ABO lasted an hour and a half, Cantus Cölln lasted a full two hours. Behind the stand, things looked different too:
Rehearsal in Echternach Basilica 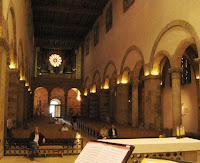 in that while two weeks ago I was playing Tenor II in tenor clef, now I was playing Tenor I in alto clef, the amusing but dangerous result being that sometimes the positions of the notes on lines were exactly the same, but actually the notes were different. So it was a lot of concentrating from beginning to end. In the concert, when I got to the bit where I had to switch to alto and play the third cornetto part, I looked at it and thought to myself "well, I suppose if I don't play it, no one else will." The dull high note training last week paid off: all the Ds came out without fuss, though I wish I'd been able to move them around a bit more. Gerd Turk's Nigra Sum was disarming by being unassuming: it was nice to hear it more like a love song and less like an opportunity for stardom. It was a privilege to play with Concerto Palatino again, too. They strike a remarkably fine balance in their ensemble playing: while every note and gesture has its own identity and no musical opportunities are passed up or skimmed over, yet nothing sticks out enough to draw attention away from the wholesome collective sound. 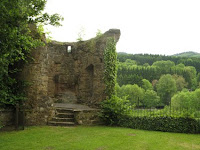 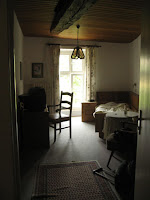 The festival kindly provided me with a hotel room in a small town next to Echternach (but in Germany): a lovely place for a post-travel shower and nap. Nevertheless, I was still exhausted by the concert. Somehow as a musician, one learns how to find advantages in every state of mind. With exhaustion, of course I have to make more of an effort to concentrate; on the other hand I tend to be too tired to get nervous, a nice reprieve.


After the concert I got a ride to Aachen with Cantus Cölln's alto, Elisabeth Popien, who very kindly put me up for the night so that I could get the next morning's Thalys to Paris. That afternoon, you see, an hour north of Paris in Beauvais, was a concert of the Concerto Caledonia. A quick aside to say why I've become a roadie for this particular band:

In the summer of 2004, when I was helping organize the Montreal Baroque Festival, I was sitting in the corner of Susie Napper's music room in Montreal, working on a computer, while something very special happened behind me: this CD and concert was being rehearsed. There was a tossing around of ideas both playful and intrepid, an intense amount of listening going on and very quickly, despite the fact they'd not worked together before, some of the most musical moments I'd ever been exposed to. I think I proofread the same document about fourteen times.

That group wasn't the Concerto Caledonia, but I decided anyway to keep my ears open for more of the same, and as David Greenberg and Chris Norman have both collaborated with David McGuinness in the context of C.C., it was an obvious choice. Then when I started buying their CDs I thought I could hear in them a kind of journey to find relevant and human ways of making music. Or maybe it was just a phase I was going through at the time which made me hear this? Anyway, bits were serious, fun, clever, cheeky, nostalgic, and at some point listening to it I remembered why I wanted to be a musician again. And so even if Beauvais wasn't directly on the way back to London from Echternach, it was close enough. In fact, now that I've heard Sunday's concert, I think Copenhagen also would have been somehow "on the way."

The concert involved the two Davids + Alison McGillivray and Greg Lawson, as well as the return of that same kind of intrepid music making I first heard six years ago in Montreal. And some very virtuosic cello playing from Alison. I was pleased at being utterly gripped for the hour and a half, if a bit taken aback at the visceral level of my own empathy as an audeince member: when Alison successfully navigated a post-fingerboard foray with flair, I looked down and my own hands were sweating.

The next day I headed back to London only to find the tube system a maze of engineering works, and had to double back on myself to find a line and station which was both open and would take me to London Bridge. I got to the Globe and was very pleased that my colleagues were willing to entertain my level of tiredness given I'd just been to five countries. Also very pleased that we finished the rehearsal when we got through all the cues once, knowing we would get chances to polish them throughout the week - so we went home at 7 instead of 10 and I got a good night's sleep.

Today was the first day of tech rehearsals. One (1) picture of me in my corset-dress... from the back.

I let out a little laugh when I walked into the actual theatre portion of the Globe for the first time today. Sort of an "wow, this is Shakespeare's Globe and here I see it for the first time by walking onto the stage to perform on trombone in a corset" sort of a laugh.

I won't write too much about the rehearsals because they will probably take up the stroytelling of the next days, except to say that while I'm sure they'll get more stressful, so far we're having a blast. And my high D's from last week turn out to be nothing in comparison for what the summer's got in store.


It rained all day, and when I left, the darkness of the sky was very impressive. 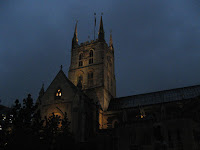