And a good thing too! This weekend was the annual Blackheath Kite and Bike Festival and I just rode my bike (!) over to Blackheath with my host family to check it out. There were some interesting kites about - this one you probably wouldn't see in the sky in Canada:

but the most impressive thing by far was the formation kite flying: 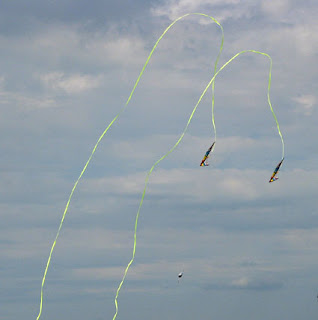 two all decked out in tails 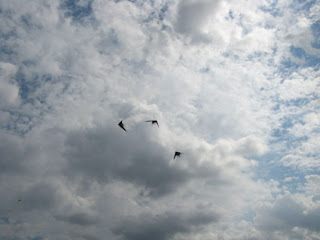 these three were all flown by the same person 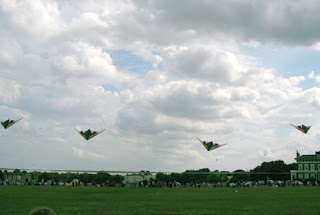 these four won the world championships 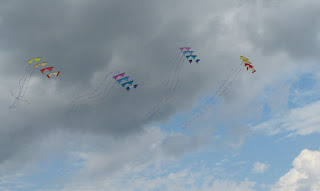 these four wiggled their tails
as they flew 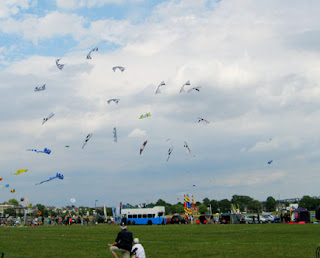 these 16 never got tangled up!

My suspicion that bike repair would prove a reasonable alternative to nesting has proven true. Getting out with the tools and reconnecting and adjusting brakes, putting myself in a good front gear (the derailer is bust but London's flat so the back 5 should do), installing a mirror and pumping up the tires were very satisfying indeed. And today I donned my helmet and rode it up to the Festival - following the family along and taking mental notes on how things go when you're driving on the left.

The last two Globe shows went rather well - we're settling into a routine and switching instruments is getting easier since I finally had some time to spend with George's alto (which is smaller than mine and a bit less taxing for the extremely high bit at the end). The moment which annoyed me last post also got better - we were brought in again after the song with an agreeable bit of hand-waving and no whispered numbers, which made playing calmly much easier. Of course I still get riled up in principle on overconducting, but in this case I'll have to accept it here and move on. It helps that it's clear there are no silly power-games going on, just a desire to get it right which is zealous enough to get in the way of making us players feel trusted. But as the only thing more difficult than playing when you feel that you're not trusted to do your part is to play in a situation you don't accept, I'll at least remedy the latter myself.

Feeling quite exhausted most of the time when not at the Globe, I've indulged this week in beginning to watch Doctor Who from the beginning of the new series. I remember when I was about four, settling down to watch Polka Dot Door and having to endure the terrifying last few minutes of the old Doctor Who and scary theme song. Now I'm ever-so-slightly addicted. If you tune in (you can find them all, 72 minutes a day, at ninjavideo.net), let me know what you think of Murray Gold's soundtracks. I usually find the unimaginativeness of television soundtracks to be a crushing bastion of missed opportunities - but his, when I notice them coming out of the woodwork, are very refreshing displays of inventiveness and cheeky retro commentary. Nice that he has the BBC National Orchestra of Wales at his disposal too.

Oh, and thanks to Claire for clearing up the Coal Tar Soap issue, and for pointing out that it used to be made around the corner from where the Globe stands today. Off to book my rail tickets for my September jaunt to Bonnie Scotland - I'll have a ten-day break from the Globe so I'll head for the hills. Right now the tickets are cheap as chips.

Did anyone notice anything odd about last Monday's post, by the way?
Posted by Catherine Motuz at 05:04