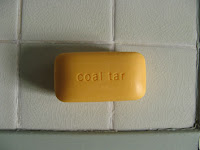 I thought that this soap was some kind of joke when I read "Sainsbury's coal tar fragranced soap" on the package. Is it like Berty Bots every-flavoured soap? Is it for nostalgic Northerners, pining for the mines? (Is that comment going to get me into trouble, Claire?) I had to buy some, of course. It left yellow goo on the tiles but it smelled fine if not exactly what I expected from coal tar. And I feel quite clean now.

Today I bought a bicycle from the online classifieds at gumtree.co.uk, and went on an excursion to Bethnal Green to pick it up. Finding the person I was to buy it from not home (miscommunication), I went off to find Shoreditch Cycles, and failed - only to find an abandoned warehouse at the address. I suppose that's why their website was offline too. So I found a stray wireless signal (yey iPod touch!) and it told me Brick Lane Bikes was not far away. I meandered back along Bethnal Green road, passing a great multitude of colourful and glittery sari shops and Indian food shops - couldn't resist buying a box of ripe-to-perfection mangos...might bring some to the Globe tomorrow. The people at Brick Lane bikes were not very nice or helpful, but anyway I left with a matte white new helmet (flat-backed so my trombone case doesn't push it over my eyes), heavy lock and front and rear lights. Then I went back to the Gumtree advert address and picked up the bike itself. One of the gear shifts is on with duct tape and the brakes were disconnected. Oh well, a bit of bike repair might feel like nesting, I thought. I managed even to connect one of the brakes without any tools and ride it on the left of some deserted sidestreets pointing in the direction of London Bridge station. 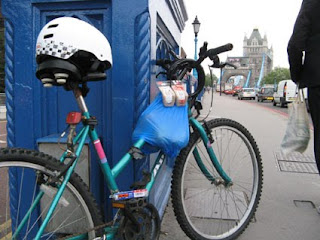 That's about right, I reckon.

Life at the Globe feels like it's cooled down a lot. On Tuesday it felt like all the momentum we'd built up the week before had vanished into thin air... it was pretty hard for everyone, actors and musicians included, and we weren't as on top of things as in the first show. Effective, yes. Fantastic, no. On Wednesday we had a matinee and this went better - a bit of momentum and a bit of feeling like we actually knew how it went, which was nice.

Yesterday there was a moment of backstage where I wanted to change how we picked up the instrumental tune of a Welsh ditty that an actor has been singing very freely (and very well if I may say). I hoped I might, when he got to the last note, simply breathe and pick the tempo back up again with my lone upbeat. Apparently this is very risky behaviour. Oh. So the director is going to give it the way he did yesterday, by beating anew and whispering "2!" in order to assist me finding the perfect millisecond to place beat three. It will be an extra bit of work on my part to come in pp and make it not sound alarmed.

But this moment accounts for just 1/3 of a second or so. The rest is still pretty fun.
Posted by Catherine Motuz at 23:35