Before the story starts, a few more signs:

and this one had more to it, but I read
it from the bottom. This one here below: 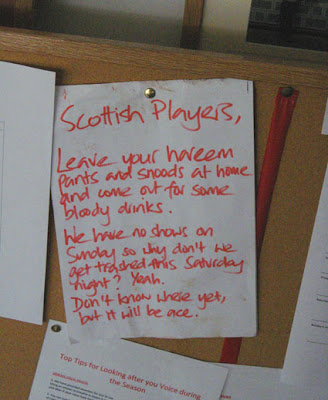 shows that MacBeth is winding to a close -
and they've begun to party quite a bit:
On Friday was their yearly midnight show,
the cast stayed up til five to watch the sun
before the Globe chipped in a cab ride home.
We're very well attended here indeed:
on Tuesday I was stuck in costume when
I had to mail* a letter urgently -
a member of the staff was at my call
and sent it for me off to Amsterdam.

The atmosphere in London has been great,
especially on both the weekend nights: 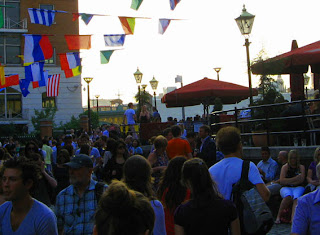 but nothing could compare to yesterday,
which was the Preview of our Henry IV -
the first time, with a (sold-out!) audience.
Adrenaline would have been through the roof
...had there but been a roof above our heads!

To my delight I'm on stage half a scene:
a tavern-whore who first jams with the band
then crouches on the steps and listens in -
not much, but cool I get to see a bit
of Falstaff and Prince Henry at their game,
and giggle at the jesting going on.
A couple times, up in the tiring house
another sackbut player said to me:
"can you believe we're really getting paid
for this? I know that it's a lot of hours,
a lot of concentration too, but then
its such a treat to be a part of this."

But as I'm sure you've figured out by now
six days of Shakespeare does get in one's skin!
I'll post here some more stories as we go,
we're out of tech so I've got time to throw
at this again - to my joy and relief -
but as I'm tired, tonight will still be brief.